President Uhuru Videotaped Taking a Walk Along the Roadside Alone 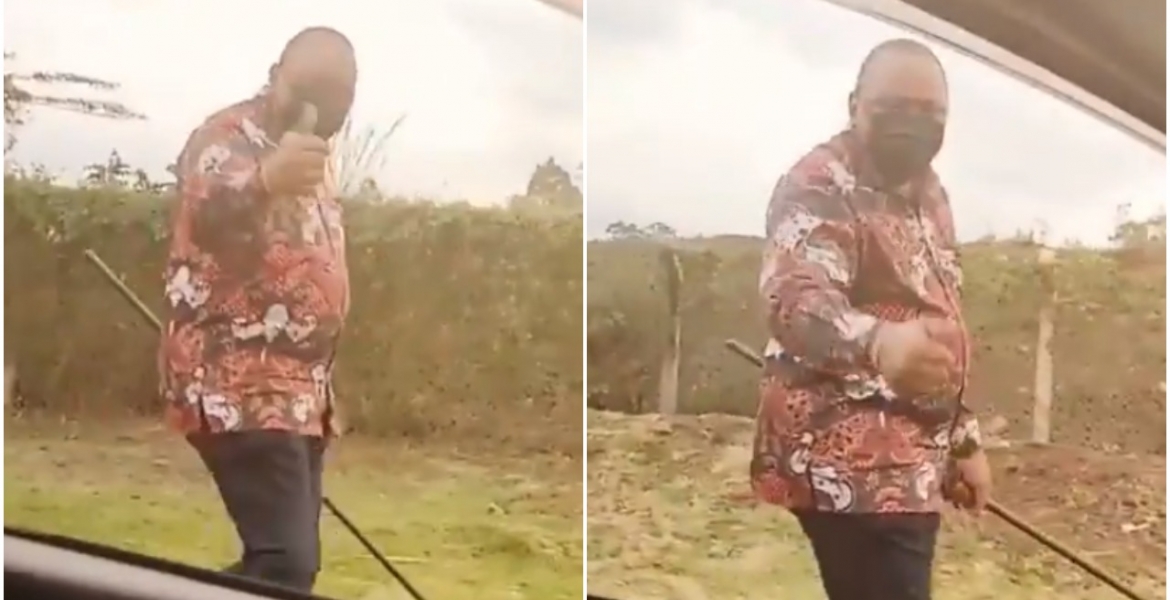 An undated video showing President Kenyatta taking a walk along the roadside has emerged on social media.

The clip that has since gone viral online was shared by Radio Africa Digital Editor Oliver Mathenge on Twitter on Wednesday night.

It shows President Uhuru strolling while holding what appears like a walking stick. He is dressed in a black pair of trousers, a flowery shirt, and a black facemask.

Some Kenyans who captured the video from a moving vehicle are heard saying hi to him, with one of them asking him to watch a program known as Selina that airs on Maisha Magic East.

“…How are you sir…Oh my goodness, what! Have a good day. Ona Selina (watch Selina) Maisha Magic East,” the overjoyed Kenyan tells Uhuru.

Uhuru responds by saying he will watch the program.

It is not clear on which road President Kenyatta was strolling and where he was headed to.

Sedentary lifestyle is the mother of most man made diseases such as obesity. Walking is a good exercise.

I hope the walking will cut his belly

Stunts and more stunts. When he senses a fail coming he devices a stunt to make him look like a common kenyan

Miracles! Our dear leader walks- he has actual legs and can touch the ground like you and me- never knew that. As you walk around remember Sonko also needs to walk home to his family but he is less human- of a lesser god and locking him up after you got him out of office after all he did for you should give you a thrill- right? You are evil for real. You have to walk at night maybe with a "kabuyu- stick (nyoka symbol)" to "pray" that your enemies be destroyed and BBI be passed in darkness. Good luck with that.

Based on the size of his pot belly and the shirt this is a fairly recent video.

He is becoming very fat to the extent that he is start to look like his buddy baba .He needs to start running he is not even over 70 like baba and he has a cane .Achana au punguza pombe bwana.

Kenyans need to Normalize beating up politicians.
For example this was a golden opportunity to beat up Uhuru Kenyatta.

This is most likely staged. lets hope the guy gets paid or he will spill the beans.

The more powerful you become the lonelier it gets because you have to be protected hence the lone walks.
After shedding the thieving tangatanga dude he has become a better president despite Covid.

Politics aside Kenyans need to think about their health rich or poor if you are unhealthy your quality of life is demished. He looks older than RAO. No Uhuru no, Ruto, no RAO, we need new blood. Wake up Kenya .

Don’t lie rad mataz!! Does Uhuru look he is struggling walking!!?? He is walking stronger than you and all your kind put together! Who told you Uhuru is unhealthy and looks older than Raila? Respect your elders and stop being an ass!! Idiot!

Jambazi Uhuru is not alone in his family of thieves and murderers.His had an expired nameshake elder brother,Chepkube coffee thug Peter who was three times huge than Uhuru.Huyu zetani needs a people’s revolution like Bashir.

UHURU taking a walk is not news, there are better things to discuss.
This is just photo op..
The president will never walk alone.
This is some BS.

But I suspect he's not walking on a public street. He's walking at his Ichaweri family compound or Brookside Drive....