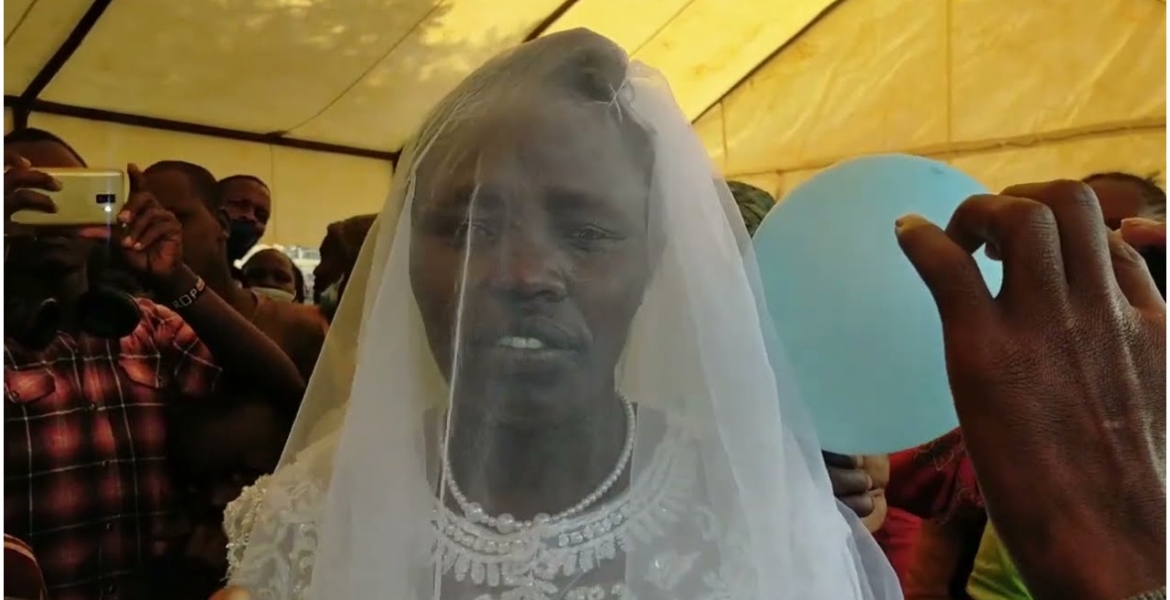 A woman from Kapenguria, West Pokot County has stunned residents after she abandoned her husband and got 'married' to the Holy Spirit.

Elizabeth Nalem, a mother of six, said the Holy Spirit led her to Pastor Albert Rumaita, who bought her a wedding gown.

Speaking during the ‘wedding’ ceremony attended by hundreds of residents on Wednesday, Nalem said she decided to leave everything behind and preach the word of God.

"Today I Bring you what you have never seen before. I searched for Him (God) and I found him, and now I have brought you the word,” she said.

"I have worked and done everything including bear children. But, God has called out to the world and people are yet to receive his word. I am one of them that has received his word and brought it to you.”

She continued: "When God planned my wedding, I did not know what it meant. The temptations I have gone through forced me back to God. I resorted to my pastors to seek clarity.”

Residents who spoke to media said they initially thought that the woman had gone mad as she would retreat to prayer at odd hours.

Nalem’s husband said he respects her decision, promising not to stand in the way of her faith.

"I am okay with it. There are no two weddings, but I am shocked. I don't understand what is happening," he said.

He divulged that they got married in a ceremony and he even paid a bride price of 22 cows to Nalem’s parents.

I tell you, this is madness. I think she has a mental illness and those close to her should and must keep a close eye on her. She needs help.

The pastor who celebrated the occasion is “more mad”. These are a bunch of crazies. That’s why weak hearted folks are running away from Christianity.

Why do some idiots pretend to be more “saved” that those who brought Christianity to Kenya?There is no way God can break your marriage so that you marry another person.Hooker Nalem has taken her PENGENYE to Rumaita.

She didn't get married to "another person". She got married to a Deity; the Holy spirit. And she didn't take "her MENGENYE" to Rummaita; she took her MENGENYE "away from" Rumaita.

Covid is ‘screwing up’ wadhii. Epitome of covid brain here!!!

God doesn't make a person break God's laws. Marriage is for human to human aka mundu ku mundu. Not human to spirits.

Here we go again. Passing judgment and insulting someone just because we don’t agree or see what they are doing is ‘normal’. Brethren share your comments without the insults.

@KK, unfortunately that's the nature of free speech.More often than not, there are 2 Things that would make someone offended or mad (a) You are in the right, and being offended is justified. Then you should work to change the circumstances that inspired someone to say the thing that offended you.
(b)You are in the wrong, and being offended is only a manifestation of cognitive dissonance, an emotional response to prevent you from having to engage with ideas that don’t fit in your belief system.
The later is more so applicable on this forum.Some people dont want to hear or read about any idea that might challenge their long held beliefs.It pays to be open minded. And when you feel that someone is wrong,just correct them.If they are open minded,and realize you are right,they are prone to change their minds.There is no reason in being obstinate for the sake of it.My two cents.

Maybe she will even geta child from the holy spirit like Mary did. End of time has come

While I hate to comment on this issue, I think it is very selfish for someone to bring six children to this world and then abandon them in the name of catering to her spirituality! The woman had a responsibility to her children and less so to her husband!

I had an uncle who did the same irresponsible thing of leaving his wife and three children to be married to his spirituality! He then took off with a group of crazy folks and went to a far place and soon after that he was dead as he fasted for 40 days!

He left three kids - 3, 2, and 1 year old for others to cater for them. My father and other uncles had to build a decent house for his wife and kids, fed them, educated the kids after my uncle selfishly died.

He abdicated his parental responsibilities for selfish spiritual motives! He Left a wife who had no job doing everything possible to raise three kids! I get quite nervous and sad when I hear a parent do something this crazy!

You just don’t bear six children and then take off to do your own selfish stuff! Those kids are bound to suffer a lot because someone else will now have to raise them while the mother is roaming al over the place like a wild animal.

Something is very wrong here! That is all I got to say about this unfortunate situation!