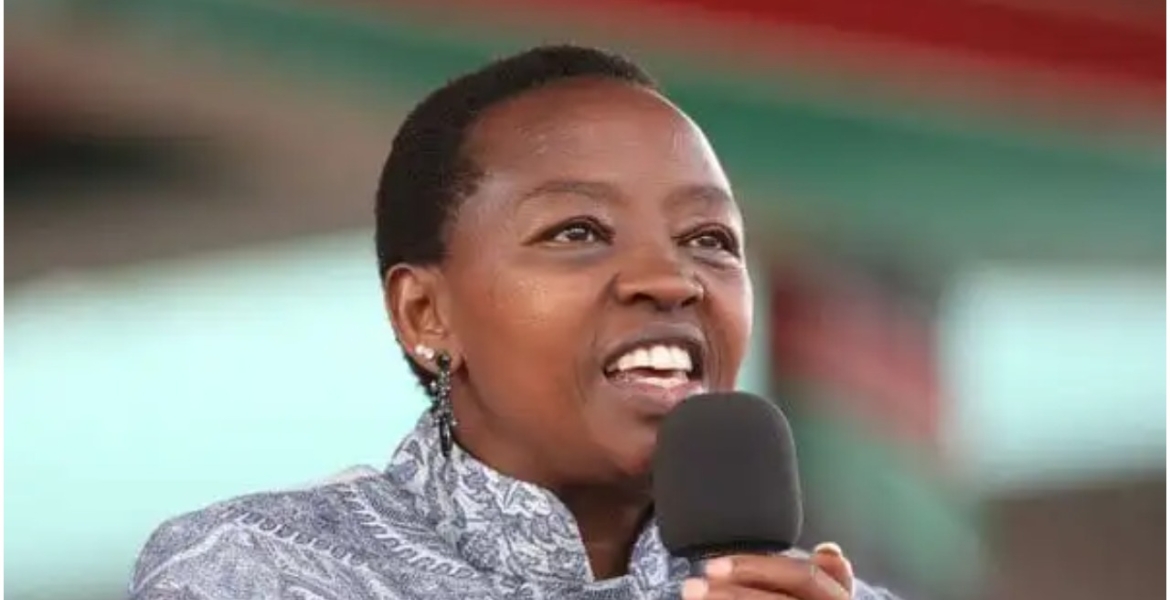 Addressing a group of church leaders who visited the deputy president’s official Karen residence on Thursday, Rachel said they have been purifying the water since the borehole was drilled in 2003, which gives them a headache as the expensive purifying machines keep on breaking down.

“I know there are many people who live in Karen, and at least for us, where we live, we drilled a borehole in 2003. When the water was taken to the lab for testing, they told us we could not drink that water unless it was purified,” Rachel said as quoted by The Standard.

She added: “So my husband, the Deputy President, went into a venture and bought very expensive purifying machines, and that is what we have been doing. Purifying the water all the time before we can drink or use it. And I kept wondering because you could actually see the impurities in the water.”

Rachel said the machines malfunctioned recently and they had to call their team from Eldoret to come and purify the water but it turned dirty barely a week later and their worker at the residence was getting frustrated.

“I kept wondering, am I worthy to do what Elisha did? Just to go pray for this water? But you know I kept thinking, maybe I need a pastor. Maybe I need a prophet. Maybe I need somebody else.  And the Lord just kept reminding me about that [scripture]. On Wednesday last week, which is our day of prayer and fasting, I went to the office for a meeting then went for prayers and thought: Let me go to the residence and see what is happening,” he recounted.

“When I got there, the Lord reminded me about that water. You know what I did? I went to the kitchen, took a bowl, put salt, and went to the borehole. I went and decreed the words of Elisha.  I said, ‘this water, will never be dirty again’ and I sprayed the water around the borehole.”

Rachel says she left for the official residence but she visited the home the next day, and later Friday when she realized the water was looking clean.

“He also told me, “Mom, I’m not even taking water through the purification machine. I’m just pumping it from the borehole to the tank, and we started giving God thanks. Yesterday I was there; the water is still clean!”

Ruto, who is seeking to succeed President Kenyatta, also confirmed the same even as he thanked his wife for being the family’s prayer warrior.

“I was in our bedroom last Friday and I heard shouts from downstairs and I was wondering what the problem was but then there was this water that was being brought and I was forced to drink it. It is true we have had a problem with our borehole water, in fact, the water was black but now we have clean water,” Ruto told the meeting.

Be careful when Bible lifters who practice nothing written there start mentioning it.

Devil knows the Bible, e.than you all

You watching 2 many Nigeria soaps

@daima just called out Rachel for being superstitious and lying to Kenyans. Rachel has been watching too many Nigerian movies from her son-in-law. Nigerian will turn black water into red water into green water as long as they make a fake shilling. Rachel is lying big times.

Ali, step on the sidelines. You Islamist believe in angels and demons but not Jesus the son of God Almighty. The world shall not judge a Christian.

The judgment will not come from you, it will come directly from God the father. And yes every body will have to answer what they did or didn’t do on that judgment day.

And yes, let Rachel Ruto stop lying about turning black water into ndifei because Kenyans are sharper than you and her think.

What is next from Rachel? Was she not there when Ruto killed women and children? Why did she not pray to stop Ruto from killing others?

@crypto. You must believe in demons because Jesus wasn’t judgmental. Can you take the log out of your eyes before you start addressing the split in other folks eyes? You will narrowly make it to Heaven with the kind of judging you have in your firely blossom.

Mrs Ruto, this is total bullshi*t baloney!!!! Its shocking how deceit is used by this family at all costs to get to power! Loh! SMH!!!!

Is that wher Rachel is heading to after her and Ruto have sensed political defeat? Kweli hawa watu wako na ufala sana.

Has anyone ever heard of Jones Town in Guyana? 900 people died there because of greed and lies. Rachel - please??????

Has anyone ever heard of Jones Town in Guyana? 900 people died there because of greed and lies. Rachel - please????????

Why believe what happened in the Bible wont happen today? A fool says in his heart there's no God yet the devil who lies to them believes and shudders

I wonder if you know God based on the nonsense you defalcate here on daily basis. Now you want to tell us that Rachel’s lies are divine so you can confuse the masses. Nonsense.

"Ach du Scheiße"u german will say . Does this mean she her prayers will make her man the president?

Rachel is lying and she knows it. Ruto is not going to be the next president of kenya. The man is thief and that is what Rachel need to pray about because she is a beneficiary of stolen wealth.

I will pray that God give me billions which i can donate to all Kenyans . I wil pray that it will not be raila or ruto what have i got to loose am i less a believer than her. what a lie lie lie lie

Comrade Loise,
Please be CAREFUL what you pray for.
From a personal perspective, I prayed to GOD to GOD to bring me to my knees, and got it, but little did I know that blessings were on their way, but before I understood the dynamics, it was painful.

Black water? those are lies. If he said brown or green water that is another case.

God of miracles. Miracles and wonders and healings and deliverance still happen. Glory honor praise thanks to God Almighty

Stop invoking the name of the Lord in vain. Rachel means the earthly lords. She is making every attempt to mislead the weak minded. So you have swallowed hook and soon she will drop the heavy sinker to anchor your ignorance. What other crap is Rachel will to lie about?

The world shall not judge a Christian. That's vanity unuseful inconsequential

Please do not lie. Your heart is full of carnal misinformation because you are confused. It’s the same nonsense the fake preachers are lying to Kenyans about because their stomaches have been filled with Ruto stolen money. Tell your idiotic nonsense to the apes.

Eureka! Now Rachel can go pray for the water in Eastlands and Kibera. They don't have billionaires there.

God shall be my provider. Cursed is a man who depends on another man

God is a provider of humanity. God is not your preserve alone. To all those who will call upon the Lord, they all shall be saved. The God of Heaven is for every body and not only @gocrypto and Rachel Ruto. Stop lying to the people.

Now Rachel Ruto has started the scam to raise free money for her husband’s journey to The Hague. Kenyans - especially the women who are easily swayed by some orthodox lies, but very careful the kind of lies Rachel is spreading here. She will con many Kenyans on a broad day light in the name of “miracle water”.

Please Rachel. Stop lying to weak minded Kenyans. You know better not to take over the lying profession of your husband WSR. Kenya can’t have two lying cons coming from the same house.

How much is a gallon of this water Rachel?? Is it free or you will sell it like Kanyari and the rest of the Morten religious thieves?

The water in the borehole of a DP is supervised and tested daily to make sure that it’s portable for human consumption. Rachel is lying to the masses for whatever reason(s). I urge Kenyans to be very careful in what Rachel is claiming to be Elijah the prophet. Something is not adding up here.

Cheap lies Rachel. Try again because Kenyans wamechanuka. How many Kenyans drink black water all over the country from some dirty stream and are still alive? You can survive drinking your black borehole machine pumped and filtered water. Stop mooning (dropping your trousers and leaning over to show your buttocks to poor kenyans) poor Kenyans.

Kenyans - make sure that no body forces you to drink water that you do not know where it has been fetched. It’s irresponsible for Rachel to tell Kenyans they can drink water that is forced on them. False prophets are every where these weird days.

WAKENYA tulilogwa na nani??
UJINGA watatuachisha lini??
Either we are too stupid or plainly stupid.

Kenyans are too stupid to allow Rachel to cheat them. She is really working hard to confuse Kenyans as she hopes to save her rouge husband from paying for his crimes against humanity at The Hague. Kenyans can be quiet naive at times.

With such miracles coming your way, I wonder why your husband need close to 300 security personnel to protect him and your ill-gotten properties

Rachel can’t even pray for the chickens to be safe. She has to get gsu to protect the chickens while Kenyans get mugged on the streets of Nairobi and other places on daily basis. Wacha ufala Rachel.

Rachel is trying to mislead a lot of Kenyans. The guy who was pumping water from the borehole to the Amos maybe myopic by sight to even see the true color of the water. He probably couldn’t tell if the filtration machine was working because he does not know how to operate the machine.