Police Warn Kenyans Against Transporting Chicken on Top of Vehicles 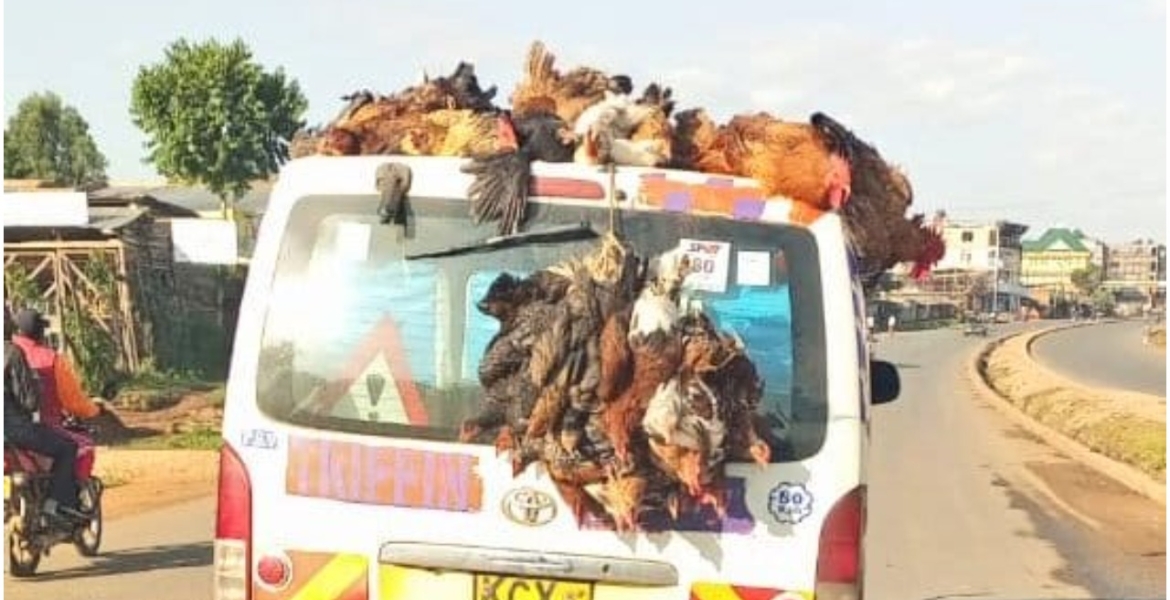 Police have warned motorists against transporting chicken on top of vehicles, stating that it amounts to animal cruelty and contravenes the law.

Through Twitter on Thursday, the National Police Service (NPS) warned that law enforcement officers will take stern action against those found ferrying chicken on top of vehicles.

“Cruelty to animals. UNACCEPTABLE. And it’s a violation of the law. Traffic officers to be tough on this level of open and blatant cruelty. It’s also an eyesore,” NPS warned.

Police issued the warning after a concerned member of the public recently captured a photo of chickens being ferried on a 14-seater public service vehicle.

The Prevention of Cruelty to Animals Act, 2012, states that cruelty towards an animal, both domestic and wild, is prohibited.

"A person shall be guilty of an offence of cruelty if he cruelly beats, kicks, ill-treats, over-rides, over-drives, over-loads, tortures, infuriates or terrifies any animal," the act reads in part.

"Any person guilty of an offence of cruelty shall be liable to a fine not exceeding three thousand shillings or to a term of imprisonment not exceeding six months, or to both.”

The act seeks to control the treatment of animals, including their use in experiments. This includes committing violence on an animal, overworking it while unwell, starvation and denial of water, abandonment and poisoning.

It also prohibits careless surgery procedures, hunting and killing in a cruel manner, prolonging the life of an animal in great pain, placement of traps and snares that cause unnecessary suffering to an animal, failing to check on a trapped animal, willfully poisoning of animals, and training of an animal in a cruel manner that inflicts pain and terror including the use of whips, goads, and electrical shocks.

Performing acts of entertainment where an animal is made to suffer, including fighting or hawking of animals in a cruel manner is also illegal.

That is DP Ruto transporting some stolen chicken. Oscar Sudi is the driver of that taxi. Talk directly to DP Ruto and tell him to stop stealing chicken.

@Gatheca, that is how the hustlers would be handled by a Ruto government.

Wow, I'm surprised there was even a law of this manner, it's the high time drivers and animal owners are cited for this cruelty.
Any person abusing an animal is a despicable person who is capable of doing the same to a human being.
Reason to curb this menace with a matter of urgency.

Cruelty to Animals? So which is Worse: Slaughtering them or Giving them a Ride a Top Vehicles?😎

Would you like to get a ride in that manner...?

@ Max, we don’t need @ Guest1’s permission to get a ride in that manner, we just force him! Chicken and goats have never been asked of that.

I think Guest1 is a she. In that case,before we "dangle" her on the matatu" the chicken way", we should make sure she has her spandex on.Address would blow in the wind exposing... you know what I mean... unsightly view.

Even carrying goats on boda bodas must be outlawed. They are punished through transport and then eaten. Stop this.

Ruto’s bad behavior and tendencies have caught up with the lawless hustlers. Kenya will get worse that this if Ruto is elected president. Ndariri ya mvua ni mawingu. Kenyans beware.

The penalty is too lenient! A hundred thousand in fines and two years in prison for a first offender fits the bill!