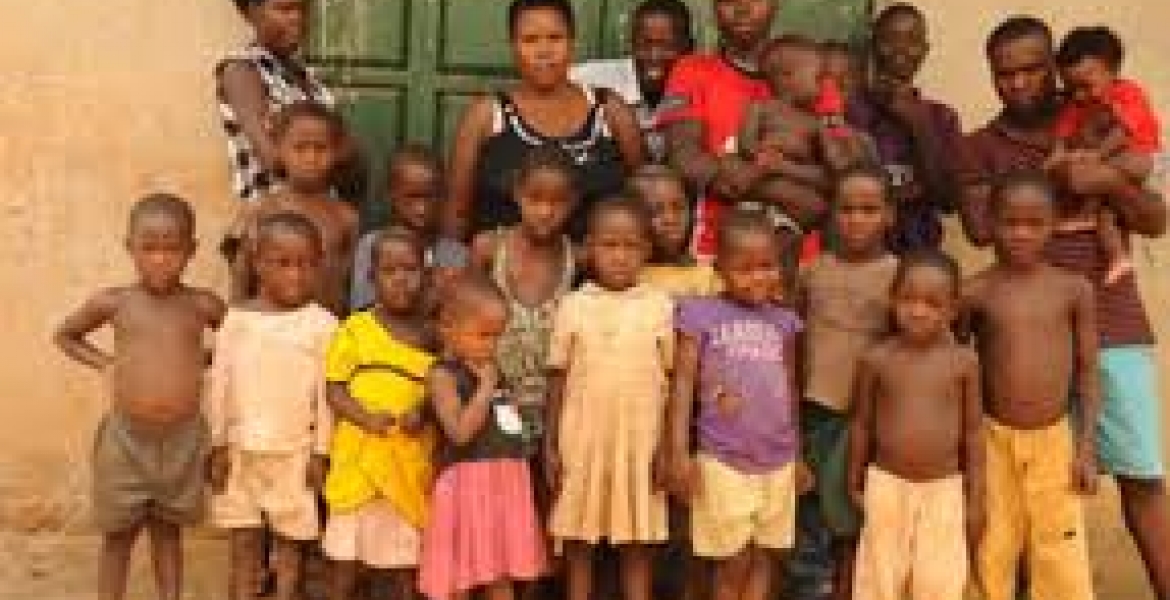 A 37-year-old Ugandan woman from Mukono District has set a new record in the country after delivering 38 children. Mariam Nabatanzi Babirye has had six sets of twins, four sets of triplets, three sets of quadruplets and one single births totaling to 38 Children for a 37 years old.

Ten of the children are girls and the rest are boys. The eldest of the 38 children is 23 years old, while the youngest is four months.

According to the Ugandan newspaper The Monitor, Mariam was married aged 12 in 1993 to her husband, who was 40 years old at the time of marriage in what was a forced marriage by her parents. ''People came home and brought things for my father. When time came for them to leave, I thought I was escorting my aunt but when I got there, she gave me away to the man,'' she narrates.

The year following her marriage, Nabatanzi delivered twins, which were followed by triplets two years later. A year later, she got a set of quadruplets.

She explains why this was not a strange occurrence

''My father gave birth to 45 children with different women and these all came in quintuplets, quadruples, twins and triplets,” said the woman, who is called by fellow villagers, as 'Nalongo Muzaala Bana' (the twin mother that produces quadruplets).

Dr Charles Kiggundu, a gynecologist at Mulago Hospital, explains Mariam’s condition as genetic. “Her case is genetic predisposition to hyper-ovulate (releasing multiple eggs in one cycle), which significantly increases the chance of having multiples; it is always genetic,” he says.

Mariam says she has tried different family planning methods but none worked. “I was advised to keep producing since putting this on hold would mean death. I tried using the Inter Uterine Device (IUD) but I got sick and vomited a lot, to the point of near death. I went into a coma for a month,” she says.

The Guinness World Record for the most number of children born to one mother is 69. The wife of Russian Feodor Vassilyev (b. 1707–c.1782) is said to have given birth to the 69 children in 27 pregnancies, including 6 pairs of twins, seven sets of triplets and four sets of quadruplets

why not do tubaligation or partial or total hysterectomy? This is setting this kids up for extreme poverty, lack of school fees etc. It's not fair for them unless the family is wealthy.

Whether the maths is off by 3 or 4 to me no big deal-,still these are alot of mouths to feed, cloth,and send to school. May be that's why the story is here to garner a few wealthy sympathizers.
Yes it would be of public behoof,if africans had an average of 2 kids like the western world.Time to multiply and fill the world is gone. That was when we lived off the land,or rather on farming,and hunting only... ofcourse this is my opinion.And I stand by it.

Is there an error in this story. She has had 37 children not 38 that is 6 sets of twins plus 4 sets of triplets plus 3 sets of quadruplets and one child

Something is a miss in this story, 22 showing and the most of them under 15 looking same age with a big gap with the big ones over 15. Also eldest 23 n mother claims started giving birth following yr after marriage, the maths don't add up.