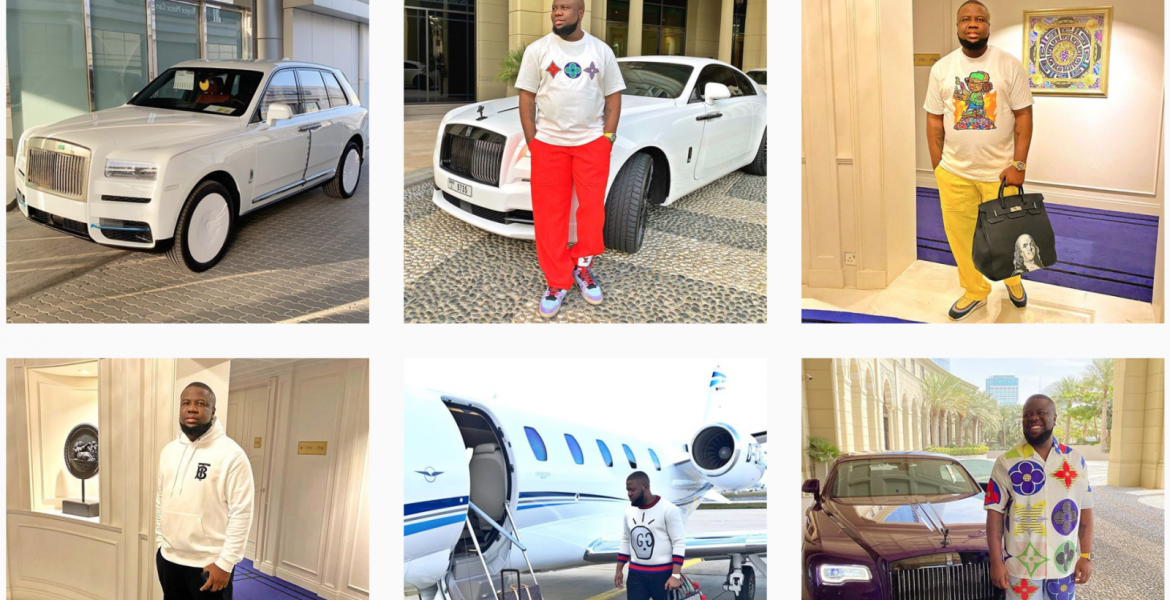 Police in the US are holding a 37-year-old Nigerian national accused of masterminding a $441 million cyber scam.

Ramon Olorunwa Abbas was arrested last month after the FBI and Dubai police stormed his apartment in Dubai and seized more than $40 million in cash.

Abbas is a social media celebrity known for flaunting his lavish lifestyle to his over 2.5 million Instagram followers. He went by the name “Hushpuppi” on Instagram, where he posted photos of him in luxury cars, private jets, and designer clothes, globe-trotting, and dining with celebrities as well as soccer stars.

Detectives used Abbas’s Instagram and Snapchat accounts to track him to his Dubai apartment at the Palazzo Versace and to gather evidence to charge him. On Snapchat, he described himself as the “Billionaire Gucci Master.”

During the special operation dubbed “Fox Hunt 2”, 12 alleged Nigerian scammers living in Dubai were captured. Six raids were carried simultaneously while the suspects were asleep, according to reports.

Also recovered during the swoop are hard disks containing the addresses of nearly two million victims 13 luxury cars worth $6.8 million, 21 computers, and 47 smartphones.

“The suspects targeted victims overseas by creating fake websites for well-known companies and banks in a bid to steal victims' credit card information and then launder the stolen money,” Brigadier Jamal al-Jalaf, of Dubai Police CID, told The Times.

Abbas was extradited the US on July 2nd to face criminal charges related to an alleged conspiracy to launder hundreds of millions of dollars through online fraud targeting a US law firm, a foreign bank, and an English Premier League soccer club, among others.

Abbas is being detained in Chicago and is represented by the Chicago-based law firm, Pissetzky & Berliner. Gal Pissetzky in an interview described his client as an “entrepreneur who ran a legitimate business and a very legitimate Instagram account and did not take part in any scam or fraud.”

“He was promoting brands and that’s how he was very legitimately making his money,” he told CNN.

An FBI affidavit says Abbas is expected to be moved to Los Angeles in the coming weeks to face online fraud-related charges. If found guilty, he faces up to 20 years in federal prison.

“This case targets a key player in a large, transnational conspiracy who was living an opulent lifestyle in another country while allegedly providing safe havens for stolen money around the world,” US Attorney Nick Hanna said in a statement.

American government and Kenyan government cannot account for Eurobond 1, 2 and 3
+
Al shabab and ISIS have refused to come clean and tell the world who is financing them
+
The Chinese claim SGR cost $3.9 Billion ( which is a lie)
=
It appears the American , the Chinese government and their allies have been channeling money to Al shabab and terrorists groups through the Kenya government.

They must be the terrorist financiers the whole world has been looking for.

If the American government and its allies feel they are being falsely accused, they should ACCOUNT for the funds they have given the Kenyan government PRONTO.

We know who has been financing terrorists and it’s not Hushpapii.

Good job FBI. Recovered money should be used to compensate victims of Nigerian crimes. As recently discovered Nigerians carry a unique gene that they inherited from untraceable extinct ghost hominid that existed in the period before the rise of modern day homo sapiens(https://www.the-scientist.com/news-opinion/remnants-of-extinct-hominin-…). That gene could be responsible for the high rate of crime committed by Nigerians

Dr. Hanene:before you talk about the Nigerian genes, what do you think about the Kenyan gene which is responsible for stealing public money and selling plots illegally? Gong forest was sold illegally to unsuspecting buyers who built houses. They are now paying the price. There is a log in our Kenyan eyes.

Read careful the article on the link I posted. It says similar genes was found in some population in Kenya and China. I don't want to speculate on something we scientist are still researching but based on common knowledge it appears Kikuyus of Kenya could also be carriers of that gene. Don't mistake me, Kikuyus are wonderful people but the reality of the matter is that a large population of them are inclined to commit crime. Kalenjin's are also gene candidates. Take Kiambu and Muranga counties for example, eighty percent of crimes committed in Nairobi is committed by people from this two counties. Kiambu county has been in state of siege since Kenya attained independent from Britain almost sixty years ago. It has never been safe to walk at night there. Corruption in Kenya was crafted during the administration of a president a kikuyu president and perfected during administration of a Kalenjin president. Kikuyus and Kalenjins are indeed two different cultures but the gene I am talking about originated from a hominid species than lived before homo sapiens

Kudo’s to FBI and as for me, I am alertly disturbed the CEO of Urithi a Mr. Samuel Maina and the entire Urithi Management will never be prosecuted and their properties auctioned after conning Billions from Kenyans, mostly from those in Diaspora in pretense of selling non-existence plots, houses, apartments and issuing fake ownership certificates. Please Bwana DCI, apprehend all those mentioned above. If you do this, I will say a quite special prayer for you. I am a senior Citizen and Urithi has my 6M paid in cash. Just imagine what I am going through. In the meantime Bwana DCI, stay safe.

Mr. Fraudster your time as a free man is limited. Good riddance. I wish they would go for similar fraudsters bankrupting Kenya with the as we speak.