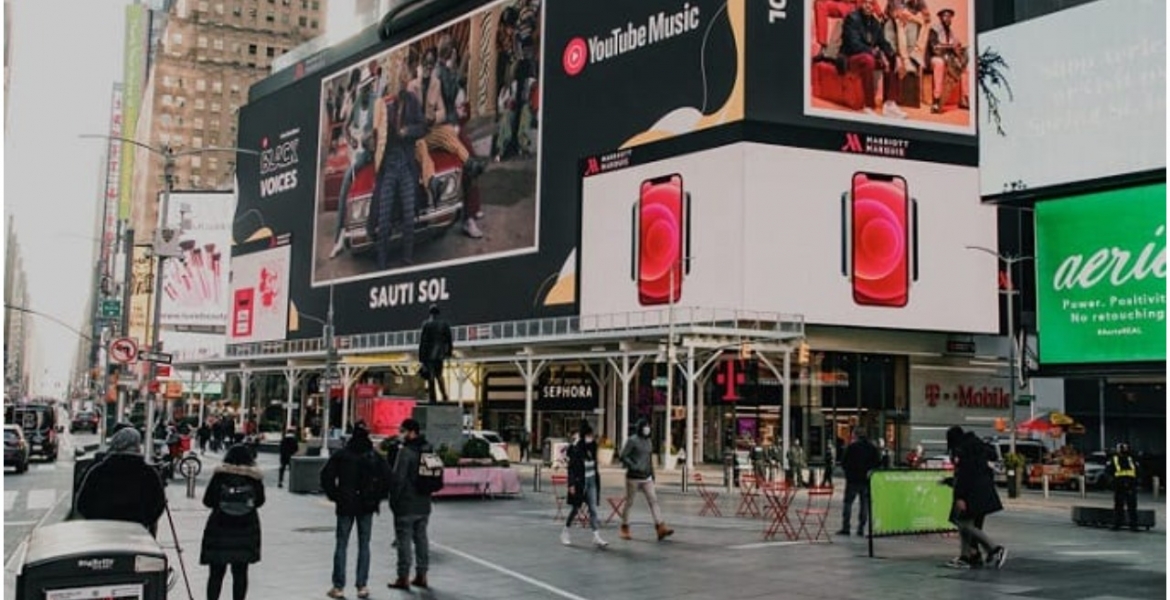 Celebrated Kenyan boy band, Sauti Sol is over the moon after one of their hit songs was featured in Times Square in New York.

The song, ‘Suzanna’ was played on the huge screens at Times Square as part of a campaign spearheaded by YouTube.

The program dubbed #YouTubeBlack Voices is part of YouTube’s broader efforts to maximize diversity and representation on its platform.

The campaign is part of a $100 million multi-year project that was first announced in June last year in the wake of the #BlackLivesMatter protests.

Taking to social media, Sauti Sol thanked YouTube for including them in the #YouTubeBlack Voices Class of 2021.

“We’re really excited to be part of the first #YouTubeBlack Voices Artist Class along with 20 other incredible artists. Our identity informs our sonics, our storytelling, and our fashion. Much like our country, Kenya, our music is multi-layered, with an East Africa groove. Our passion is for the craft and artistry of music, and our music is a soundtrack to people’s lives,” Sauti Sol shared.

“It’s only up from here Thank you @youtubemusic for celebrating Black voices and allowing us to be heard globally.”

Other Kenyan YouTubers participating in the program include Patricia Kihoro, Kaluhi Adagala of Kaluhi’s Kitchen, videographer Mumo, and Mitchelle Adagala of Thrive Fitness.

Any recognition matters. Any chance you'll have a colabo with beyonce soon? Burna boy has been there and done that way back.