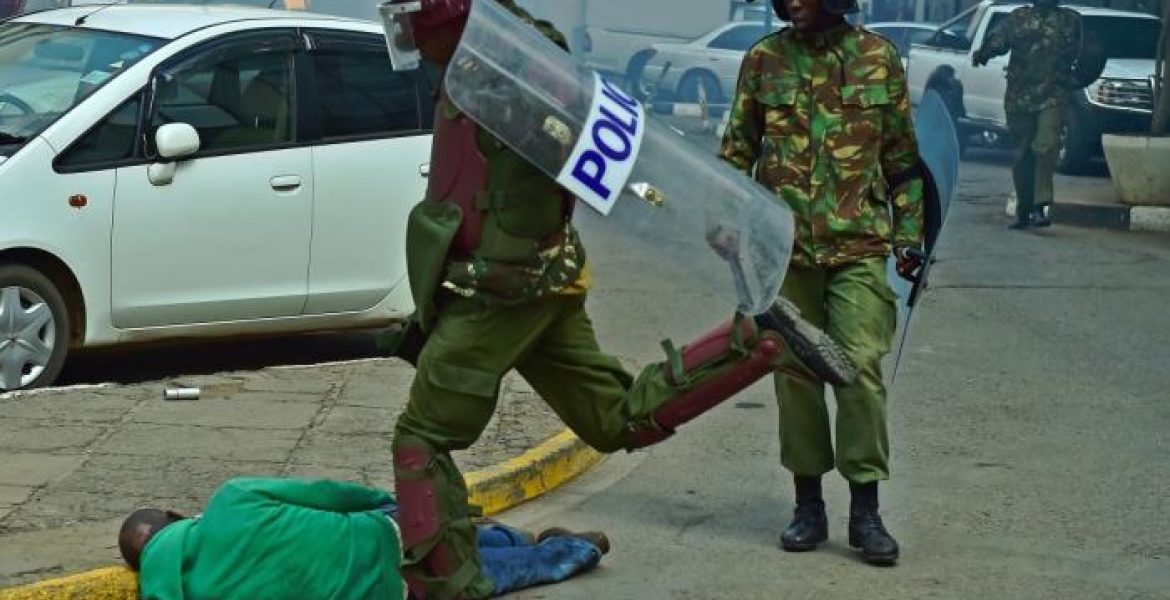 World Internal Security and Police Index (WISPI) survey has ranked Kenya Police Service as the third worst in the world.

The survey carried out jointly by International Police Science Association (IPSA) and the Institute for Economics and Peace (IEP) put Nigeria at the bottom of the list followed by Democratic Republic of Congo (DRC), with neighboring country, Uganda taking the fourth worst police service.

“WISPI measures the ability of the police and other security providers to address internal security issues in 127 countries across four domains, using sixteen indicators,” authors of the report state.

The survey takes into considerations four main factors including capacity, process, legitimacy and outcomes while ranking various police services across the globe.

Certainly this is not a ranking the police boss could be proud of. If Botswana can have a respected police force so could we.
Yes, sometimes you have to use force to calm a situation and put it under control,but kicking someone who is helpless as shown in the picture,amounts to abuse of power.The cop should be punished.How could a grown man be proud of kicking another human being like that?
I dont know what kind of training they get,but surely police can neutralize a bad situation by not injuring the offenders intentionally,by kicking and clubbing.
All bad rankings are in africa,this is not racism.some of us still behave like savages.

Imight add that the Transparency Internation year after year has ranked Police department in Kenya as the most corrupt entity in the country.And they dont seem to improve in their rankings.Now if you are the police boss,shouldnt you act on such information and improve your department?And if you cannt, step out for someone who can deliver...

With two very incompetent people in power (Uhuru and Ruto), what do you expect?

We need an ad hoc government in Kenya for about six months in power. Uhuru himself has admitted that he cannot curb corruption, making Kenya the fourth most corrupt country in the world.

They (Uhuru and Ruto) should not be sworn as the next leaders of Kenya. They Should be sent back to their former careers before Toroitich groomed them to continue with his dictatorial and corrupt based government.

Has WiSPI ever witnessed the aftermath of a contested football match between AFL Leopards and Gor Mahia?. Surely it's not a pleasant scenery. It's Barbarism at it's best-stoned throwing's. unwanted property destruction and unnecessary loss of human lives-all in the name of a football match. NASA=AFC+Gor Mahia. Kenya Police deals with some of the most barbaric population in the World. Barbaric unruly requires barbaric response and hence the third worst ranking.

FAKE REPORT!!! FAKE NEWS!!! Reminds me of those fake corruptions ranking report which put Kenya at #3 from the bottom until we all knew to desregard fake reports and to only go by Trasparency International ratings...

Please post link of the report with dates and by which organization research and methodology used to arrive on the names picked and their ranking... George Soros groups are very famous for generating fake reports that look extremly authentic mainly to support their candidate in this case Raila... Please provide link of the full report please...