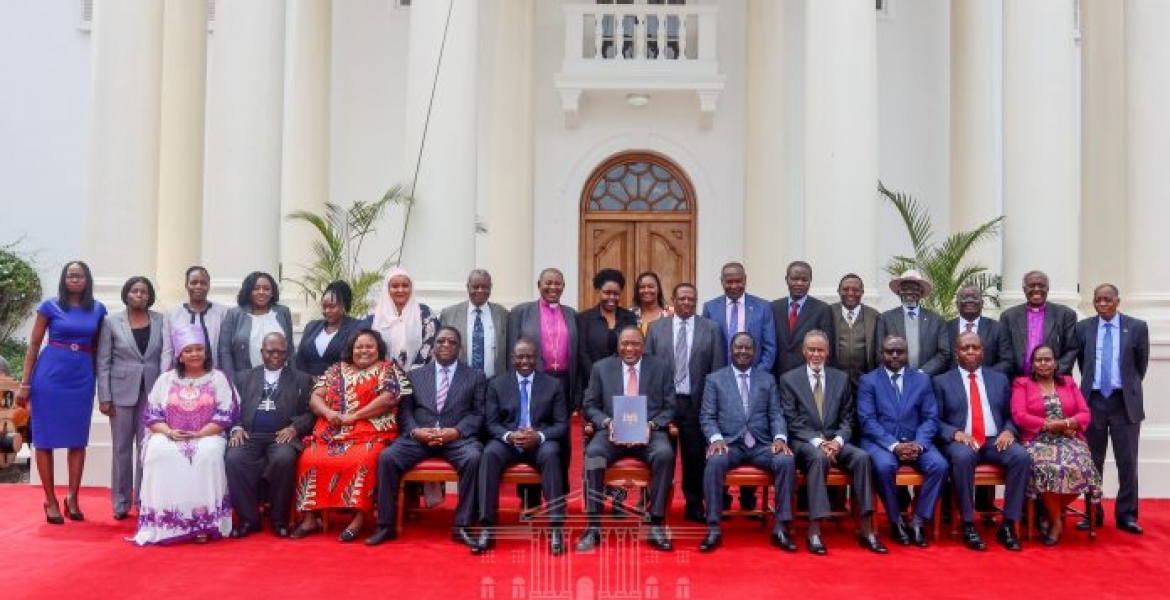 The Building Bridges Initiative (BBI) taskforce has refuted reports that the team spent a whooping Sh10 billion since it was constituted in May last year to collect views of Kenyans on nine key issues.

On Tuesday, the 14-member taskforce handed over a 152-page report to President Kenyatta and ODM leader Raila Odinga at State House, Nairobi. The report was officially launched by Kenyatta at the Bomas of Kenya on Wednesday.

There have been reports that the taskforce was allocated Sh10 billion to carry out its work but BBI joint secretary Dr. Martin Kimani has denied the claims. Kimani indicated that the team did not even spend one percent of Sh10 billion, terming the figure a fallacy.

“We did not have anywhere close to that amount of money (Sh10 billion)…I do not think we even had close to 1% of that figure,” said Kimani during an interview with Citizen TV on Thursday.

“That’s a figure that has just been thrown around the internet…it is not true. I am not the Administrator, but the figure was less than 1% of that Sh10 billion supposedly.”

Instead, Dr. Kimani said the team saved taxpayers a lot of money as members did not travel abroad for benchmarking.  “In fact, this taskforce, the first thing it did was – unlike many others in the past – we said we’re not going to get on a flight to go to another country, we’re not going to do those benchmarking things…it (taskforce) very deliberately tried to have value for money,” he stated.

“If you look at the report, it is full of very clear recommendations about wastage, duplication…it says, for instance, that people in government should not be in business, it talks about standing allowances for people with a salary.”

“Like I have a salary from the government, then you find a practice where I go somewhere to work and somebody gives me an allowance. So I, for instance, did not have any such allowance throughout the (BBI) process because we decided to do things differently.”

Kimani said he could not mention the exact amount of money the taskforce spent during the process but would sit down with the administrator and establish the figures.

“Let me not speculate because that plays into a very particular negative narrative in Kenya that comes from an understandable sense that Kenyans’ money is being wasted,” he said.

The BBI taskforce was formed in the aftermath of the March 9th, 2018 handshake between Kenyatta and ODM leader Raila Odinga. The team was tasked to collect the views of Kenyans on nine key issues affecting the country among them ethnicism, lack of national ethos, inclusivity, devolution, divisive elections, security, corruption, shared prosperity and responsibilities and rights.

Key-Mani , you did not need to spend a single coin to tell us what is spoken in every bar by men and by my unfortunate sisters when walking long distances looking for water in Baringo county. Your little narrative of what ails Kenya to massage the ego of those who ail Kenya is criminal. You say nothing about what we know as the truth-a clown cannot accept the results of an election-kills people for that and we pay for it? Why not tell the truth? Get the two families out of the equation and the cancer is cured! Election petitions for president must be reformed.You only contest the results at unit level- constituency/ward/station. It is insane to contest TOTALS and costing poor Kenyans billions when you filed no objections at UNIT level as they do in the USA. Why force the country to waste time with nonsense of TOTALS without saying what results would change/make you a winner? All the arguments at the SCK have been about "servers" forms and such bs that have nothing to do with A VOTE.About pm being an mp? Juvenile! Let Kenya benefit from best woman/man who becomes an "mp" upon nomination. Better still allow a person nominated as cabinet secretary the chance to be "elevated pm" even if s/he is not an elected mp. Such a person could also be "named" as part of a "running presidential ticket" for accountability/transparency so that the position is not promised to "several people" as con job. I hope you close your shop and "go home".Take/give your little paper to the relevant committee of jurisdiction in parliament for further look! Not a single more coin should be used for this con job.Give such monies for the January whatever(conference?) to counties for school bursaries ASAP!

BBI taskforce is full of seasoned thieves of public funds and landgrabbers, you cannot trust anything that comes out of the mouths of the conmen.

Some of these conmen have over 50years of lying, stealing and landgrabbing.