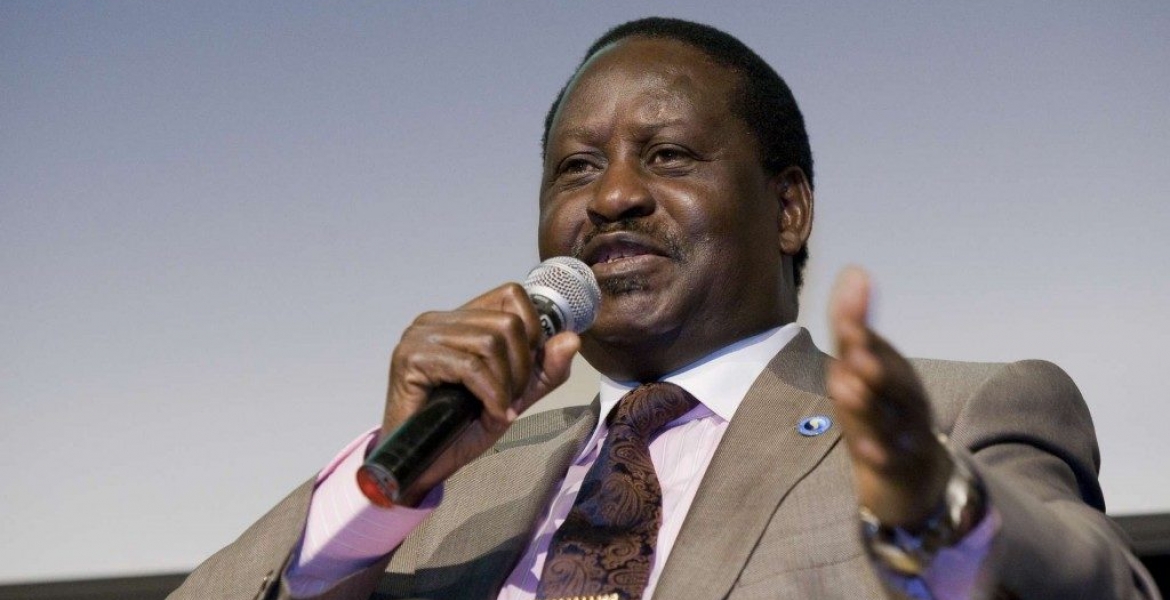 Speaking on Friday, Odinga stated that no one has barred Miguna from traveling back to Kenya and that no one fears his return.

Odinga was speaking in Kisii during the first county Building Bridges Initiative (BBI) consultative forum that was attended by over 3,000 delegates.

Miguna, who worked as Raila’s aide during the grand coalition government, is stuck in Germany after he was barred by Lufthansa and Air France from traveling to Kenya on Tuesday over a red alert allegedly issued by the government of Kenya.

At the same time, Raila revealed that a referendum will be held before the end of June this year and urged leaders to advocate for it at the grassroots level.

As a leader one should exercise decorum , name calling is so childish!

FG, did you say “leader”? Please usinilet down. Raila, Uhuru, Ruto & a bunch of others kwa hii gava are misleaders, too immature to be called leaders

@ Formerly Guest 2, if these so called leaders cannot behave in a respectable manner in public,what kind of example are they setting for our youths.
It has become very common for the so called waheshimiwa to punch and kick the common man who happens to question their morals,or bad behavior.We hold our leaders to ahigher standard,and if they sink down to the level of thuggery,then we should treat them as such.Shame on them.

Hate is what makes people to start name calling.

Raila Odinga and a lot of his supporters are enablers of ethnic cleansing and gatekeepers of the genocidal -tribal clashes-environment in Kenya.

Miguna just exposes them for who they really are.

The American embassy and the UK embassy are also supporters of ethnic cleansing and genocide perpetrators in Kenya.

Hate cannot be hidden. It always shows itself.

Uhuru Kenyatta and William Ruto are ethnic cleansers and genocide perpetrators. We can’t support people who want us dead by any means possible.

Raila Odinga needs to be honest with the world.

The Kenyan government mistreats Kenyans. It hates Kenyans especially those of us not Kikuyu and Kalenjins.

The Kenyan government is just behaving as per their normal behavior of hate and disdain.

They must be brought down. We are tired.

He seems to have forgotten or pretending not to remember.

That is because Raila uses Luos as pawns to get ahead in his political games. Miguna is a good living example.

How so? There is barely an age gap between himself, Kenyatta, Mudavadi etc,(all born as British subjects) and he is older than Gideon, Ruto, et al. Sonko and some of the the governors are younger but hardly paragons of virtue. Age is not an indicator of corrupt intentions and if you are going to make a break from the old arbitrarily, Aug 22 1978 sounds as good as any. My nieces and nephews in Kenya range from ages 1 to 24. He is about as relevant to them as rotary phones amd punch cards. His time is gone.

Generational shift is not limited to age.

It includes the way a generation views life vis a vis ideology.

If that is the case, why does he hold a constitution passed with a large mandate in such disregard that he refuses to follow it? Your argument about being kicked out of the country is less convincing if you ask yourself what shortcuts or illegal means he used to acquire his since revoked passport. I don't dispute he was born in Kenya, I say he is not special and shouldn't expect special treatment. The old constitution was clear on what happened if after age 21, you became a citizen of another country. He did swear his allegiance to the queen if I'm not wrong. If he can't be bothered to follow the rules now, imagine what happens if he were elected. Exhibit a: the Donald himself

“I swear (or affirm) that I will be faithful and bear true allegiance to Her Majesty Queen Elizabeth the Second, Queen of Canada, Her Heirs and Successors, and that I will faithfully observe the laws of Canada, and fulfil my duties as a Canadian citizen.”

The only reason he has been able to stay in Germany this long is because he repeated these words. If he was strictly on a Kenyan passport this would not be possible

I bet he was saying the same when miguna was swearing in the fake president who quickly turned against him. Hypocrites are made of this. Miguna now knows unfortunately...its too late

😁... I love your name... Kiihu. Is it a crow or a hawk? That bird which swoops from the sky, and scoops chicks, when mother hen is not looking?

Kiihu is a mammal mongoose or a skank

My surname is like a chameleon depending on the situation. I can be a high fast flying stealth scooper torpedo or a ground four legged diurnal or nocturnal monger. It all depends on you upbringing orientation or neighborhood you grew up in. Just call me kiihu. Gutiri ritakuria mwana.

Nor, for that matter, should the constitution. Yes, the GoK must follow the constitution. But then again, so must your hero. Tell him to quit being such a kichwa ngumu and regain his citizenship just like the rest of us. Or are rules only to be followed when they favor you?
https://kenyahighcommission.ca/consular-services/dual-citizenship/

Miguna is a Kenyan by birth.
Tell the Kenyan government to give him his passport back. They have it.

So am I. I neither asked for nor did I get special dispensation. I simply went through the process. You still won't tell me what makes him a special case. Kama yeye ni mzalendo, kwanini hataki kufuata katiba ya Kenya?

@Mundu
1. Have you been picked up from your house in kenya, had your Kenyan passport taken, medicated and then forceful put into an international flight by the Kenyan government?

I applied for reinstatement and have a child I'm shepherding through the process. I have no delusions of grandeur and don't think I am better than anyone else. I filled my forms, I queued up at Westlands, visited nssf, stood in multiple queues at Nyayo House patiently and paid the required fees. I didn't enjoy it but I did it. I would bet your hero got his passport using false info or half truths. I've heard that the chickens come home to roost. I guess its true.

@guest -hi Kenya Government, give Miguna his passport back🎊✊🔥! If you don’t give it back, Chacha will come get it and run it to Miguna at the Airport in Germany! So don’t worry @guest, I just order government with the fist high up✊, way up there!

Judges must treat everybody equally. How come some cases drag for years before they are heard but Miguna cases is pushed forward to be heard the next day. Does backlog apply to everybody? Our tuploti cases drag for years when we are conned by those dudes that come to sell properties in USA.

@Roberto, I don't think that the Judges who issue these 'Orders' have ever travelled outside Kenya. Kenyan Law is not applicable outside Kenya, but they don't know it. A Kenyan Judge has no power to change what goes on in a Foreign Embassy, or an International Airport, because technically, this is Foreign Ground. It is the International Community which barred Miguna from boarding a flight, because of his behavior in an International Airport, ie, JKIA. They don't care whether JKIA is in Kenya, or even if Miguna is a Kenyan. They only care about their own rules. First, is JKIA an International Airport? Answer, yes. Is Miguna Miguna observing protocol? Answer No. Next course of action? Like a Matatu, you cannot be forced to take a passenger that you don't want. I think that Miguna Miguna, as Lawyer, knows all these things. He is just playing mind games.

Kenya, don't buy tuploti from Kenyans who fly to America to sell plots next to an upcoming highway or airport. If Moi, a president sold his land 3 times, and he's still claiming he never sold, an average Kenyan sells land 5 times. Tafakari hayo.

@Ex diasporan, I am a cash cow to all the criminal enterprise that fly to USA to sell tuploti. I follow @Mkenya halisi advice.

Kenya, don't buy tuploti from Kenyans who fly to America to sell plots next to an upcoming highway or airport. If Moi, a president sold his land 3 times, and he's still claiming he never sold, an average Kenyan sells land 5 times. Tafakari hayo.

@Agwambo - I have recently started to enjoy your comic antics.

6. The high priest of corruption

Most of these antics perfectly fit your opponents very well - such as the high priest of corruption - leveled toward Ruto’s corrupt nature.

But Agwambo - believe you, me that you have one chicken from Kabi Kuku that lays 3 million eggs that help you to come up Kimwear, Arrow. Mteshi farm of stolen Kshs 21 billion? Wow, baba Agwambo, you can find si flowery antic for this mess with you darling friend Ruto?

Lest we forget, is MM not the same guy who swore Raila in on their way to Canaan? The one who held the holy book whilst the masses chanted in unison? Now, Raila thinks "anabweka, bweka? Jamani….Judas is alive and kicking, that's for sure! As a woman, I think MM's wife has a lot to answer to...why would you let your man humiliate himself this way? He needs help. I am done with calling him out as clearly he is on the edge of the cliff..a death wish hanging around his neck..... Lord have mercy!

THIS NUT NEEDS TO KNOW HE IS THE ONE WHO STARTED ALL THIS BULLSHIT. LORD OF POVERTY IS CRAZY.