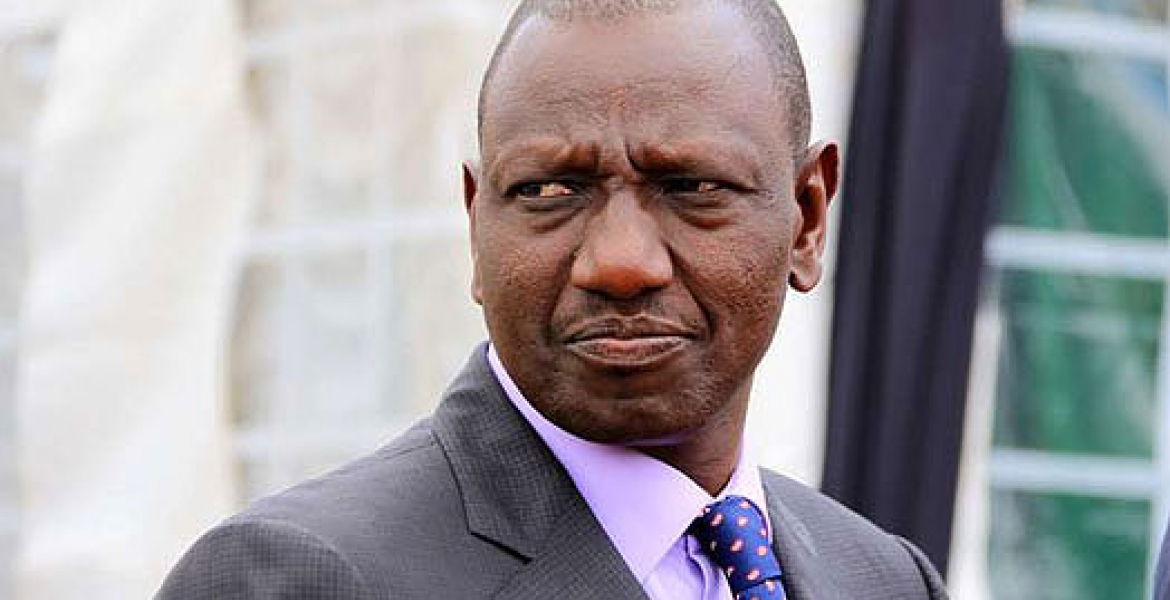 There was drama last week after Deputy President William Ruto was allegedly locked out of his official residence in Mombasa.

Ruto and his aides had reportedly arrived at the residence on Wednesday, January 8th but were blocked from accessing it before his personal property that had been brought earlier that day were packed and taken out of the palatial house, Sunday Nation reported. The house was the official residence of former Coast Provincial Commissioner and was recently refurbished as the official home of DP.

Ruto had planned to spend the night at the home but was treated to a rude shock when he was barred from entering there with reports indicating that staff had received instructions to remove his personal effects from the house. This forced Ruto to find alternative accommodation at English Point Marina where he spent the night before returning to Nairobi the following day.

“His clothes and other belongings had already been put in various rooms. It is essentially a home, and therefore his personal effects were in place that morning. Around 4 PM, a call came from a senior government official to government employees there that all DP’s personal effects should be removed. It was a shocker,” a source privy to the matter told Sunday Nation.

When contacted for comment on the matter, Ruto’s deputy spokesperson Emmanuel Talaam linked the Deputy President’s woes to politics.

“I have no idea why the DP has not moved into the house. He spent (the night) at his usual place when in Mombasa, which is at the English Point Marina. The DP’s residence is complete and ready to be occupied. Probably someone is unhappy that the DP will have a base to coordinate his activities at the coast if he moves in. It is all politics,” he said.

Government spokesman Col Cyrus Oguna refused to be drawn into the matter, saying: “There are more critical issues to be addressed and that to me is a non-issue. Whether the DP is moving in today or tomorrow in my view is not an area of discussion. I would have hoped you asked me about the rains which have subsided or the locusts’ issue. There are very critical things you can focus on.”

Ordinary kenyans are cheering on as the elite canibalise each other. They have been ticks for to long sucking the blood of hard working kenyans of limited means. Let's all sit back and continue cheering them on.

Col.Oguna Oguna, since you know what is critical issue,and what is not,why dont you tell us.Dont wait till you are asked.And for your information, just answer what you are asked.Some people find blocking DP from entering his home a"critical issue".Could it be he acquired the residence illegally?Could it be for his safety?
So dont act like you are an expert on all critical issues.Certainly you are not the go to guy on critical matters.
Your evading response even makes the whole incident suspicious.

If it was for Safety reasons, Statehouse would have been Quick to say so.

@maxiley - the DP acquired the home through illegal means; namely - corruption enterprises! Then used unauthorized tax payers money to refurbish the home at the expense of the public.

The owners have requested for him not to be allowed in until the matter is settled properly.

COL Oguna shouldn’t be tasked to answer any questions pertaining to this matter. He was never a participant in the initial corrupt deals.

Knew you would jump into it retrospect.
The property in question is a government own entity.
Refurbished using tax payers for purposes of creating a secure living space for a deputy president whenever he or she is in town. Its utility upon the undertaking was conferred on the basis of security and the allay of public funds otherwise used to rent the same.'

@ass! - glad you are now the Kenya Government spokeswoman!

Why does the media focus on this thief of SGR with a fake doctorate while there are Kenyans who can't afford their January school fees, can't afford to take their loved ones to the hospital, do not know where their next meal will come from? Poverty rate stands at over 80%. As far as I am concerned, I would rather have him locked out of Kenya and Miguna, yes Miguna in Kenya.

Very good question! Ask that question to the government’s spokeswoman @ass above. She is the calendar’s manager of the dude with a fake/stolen PhD!

But also realize that corruption is the gnawing bedrock which is eroding Kenya’s economic gains - eg Kshs 21B described by DP Ruto as Kshs 7B cup of tea drunk in Eldoret in midnight boardroom corrupt deals. He later justified the theft with 3,000,0000 eggs produced by on chicken daily. The high prince of corruption is the holder of a fake PhD.

He does not know how the marginal propensity theory work in relationship to conspicuous consumption against proper investments!

His goal is to destroy Kenya through some self serving corruption deals. He couldnt care if kids have no money for school fees or sleep hungry on daily basis.

You have all the good questions to ask!

It is politics, stealing and servicing special interest from Jan to Dec by these politicians. Never hear them talk policy. Milk, Coffee, Tea regulations have crippled farmers. The 3% tax on cucus and small scale farmers took effect in Jan. Now the livestock bill is in the pipeline. When will Kenyans wake up to this con or are we just too stupid? Sad state of affairs.

Shameful that we can treat an elected official of the government of Kenya, Hon William Ruto, like a criminal. It will come back to bite those who are direspecting him because you sow what you reap. No other way around it. Bob Marley sang it when he said: “ whoesever digs a pit, shall fall in it”. Those who are digging pits for the DP will fall in them. It’s just a matter of time. God Bless Kenya🙏🏾🙏🏾🙏🏾

This is fake news! Dp is the government! People's brains have shrunk, especially the analytical part! How can you believe such a story; well you could if you come from Raila's backyard!