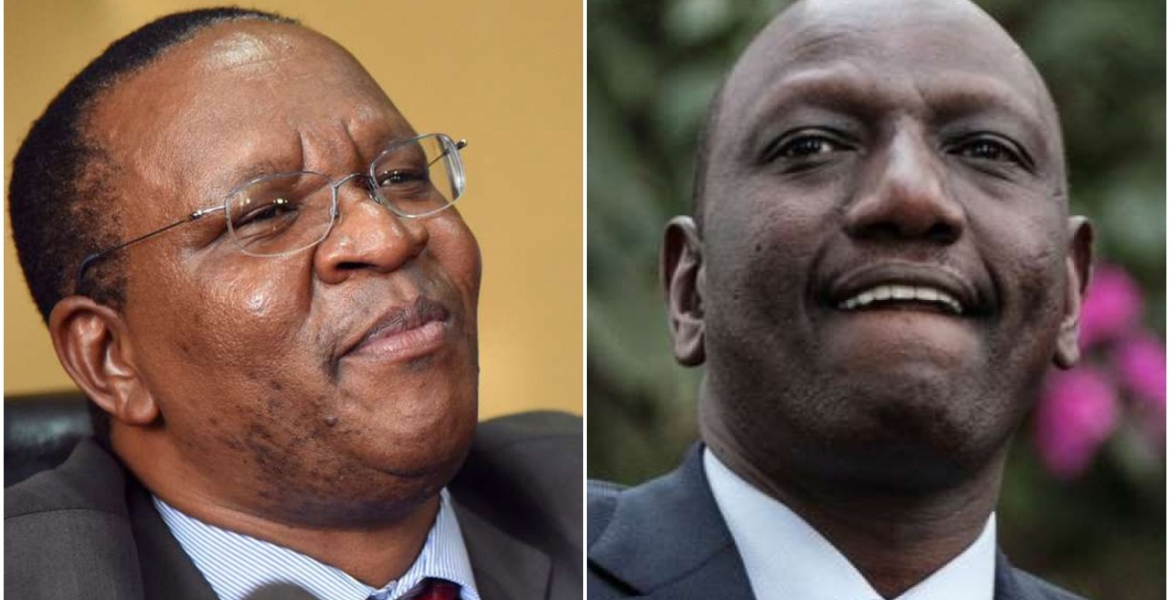 Interior PS Karanja Kibicho has responded to Deputy President William Ruto’s claims that there is a plot to rig him out in the 2022 presidential election.

On Tuesday, DP Ruto alleged that the so-called ‘deep state’ and the ‘system’ were determined to stop him from ascending to power by interfering with the election.

Ruto, who was addressing a delegation of community leaders from Kajiado South constituency at his Karen residence, said their mission will not succeed because he has God and the electorate on his side.

But in an interview with a local FM station on Wednesday, PS Kibicho rubbished Ruto’s claims that there exists a deep state or system.

“There are many things that we keep hearing and wonder what they are. When people do not understand something they create explanation through mystery,” Kibicho explained.

“It is a term used by people loosely to mean probably bad things. When you are told the deep state, you don’t think those are preachers and pastors. This definition is outrageous as it can get. There isn’t any deep state. We have facilities that you can interrogate things that you think about,” he added.

Mr. Kibicho, DP Ruto is a cry baby! He is working very hard to divide Kenyans for his political benefit(s). Only him alone who has created the terms “deep state” and the “system”!

Ruto is playing the same card he played during the 2017/18 mayhem of political killings in Wldoret. He will be more than happy to kill more women and children like he did in 2017. He is baying for the blood of Kikuyus in the Rift Valley! Ruto needs to be properly checked!

He want to stir up the ignorant Kenyans (mostly kalenjin) to start killing Kikuyus in the Rift Valley immediately campaigns start in earnest. Why was Ruto buying illegal weaponry through Echesa!? why??

The only thing holding Ruto back is the pending cases in the ICC! I still believe Ruto is a Hague material!

Ruto's lieutenants (Sudi, Murkomen, Kihika, Kuria, Ngunjiri, Faith Gitau, etc are carrying out the same negative phobia narrative! They hope is for Kenya to go up in flames 🔥 so they can blame Uhuru!

Can Ruto stop inciting a Kenyans and tell us who is the deep state and who is the system? The president must speak out directly to Ruto, and best of all fire this loser who is stirring Kenyans on daily basis!

The government is waiting too long to finish Ruto politically! Something drastic must be done now to make sure Ruto’s political life is done with. @Kibicho, the time to act is now!!! Desperate times and situations require desperate measures!

Remember what happened to those who opposed Moi once he became president! History can repeat itself that quick!

Ask Susan Kihika what happened to Kimani Kihika!? She now a Ruto ally to protect herself if the tables turn!!

The more time Ruto has while in the government, he will end up killing all those he sees as his political opponent! The man is evil and he will stop at nothing to destroy certain people and Kenya yetu!

The worst thing that ever happened to Kenya is the day Ruto was born! His greed will make sure Kenya is completely destroyed through Ruto organized civil wars!

Ask Ruto why he is regularly visiting South Sudan to see Marca in the name chicken projects? He is going there to be trained for guerrilla warfare against the Kenyan people!

Kenyans must be alert if Ruto’s movements before he burns the country down!

Everything you see in Ruto’s face spells doom for Kenya! He is a man that can’t be trusted with leading Kenyans. His insecurities amount to those of Hitler! He has a “Jewish” race to exterminate - the Kikuyus!!

That is exactly him @Daima, the DP Ruto! He stole Muteshi’s land and was forced to return it to the owner!

He is the same DP who stole the Airport land that is now being contested in court after he illegally build a hotel there!

You can listen to Jirango, the former YK92 boss, who supervised Ruto. He talked about Ruto stealing YK92 money by selling the same T-Shirt several times!

Ruto is not a man of good moral character and integrity to be the next president!

This kid ruto keep telling us he has God and Kenyans on his side. And how about the ordinary Kenyans he has been stealing from them? Is he telling them that God is only on his side? This man got severe problems that need to be explained by an expert!

Ruto have been the most beneficial of the “deep state” he is now talking about! From chicken seller, YK92, and on and on to his current DP position!

So I ask Ruto, “how come you are running around accusing others of deep state and the system” while you have been both all your political life?

It is very strange when Ruto loudly speaks of the things of which he is deeply part and parcel!

Some you guys have baseless claims about Dp Rutoh. Some of you hate Ruto for no reasons. If Rutoh was responsible for what is called Echesa fail arm deal. Why didn't NSIS, CID and other arms of the government arrest and prosecute him. If Ruto grabbed public lands why hasn't the government reclaimed the said parcel of land. If Rutoh was responsible in inviting violence in Rift_valley why was he not arrested and prosecuted. Someone you have forgotten the billions for SGR, NYS and recently corona-virus stolen funds. Was Rutoh responsible for this?

DP Ruto is an active threat to stability and prosperity in Kenya in the future. He must not become President or we are done. Anybody who loosely uses God's name in vain at every opportunity to lure people to believe that they are trustworthy or honest or generous, when all they do is steal from the very same people should be cast out of the spot light and out of leadership.

I do not support Kieleweke either, they are all bad - truth be told, but this "hustler" is no better. He's right there amongst the very worst of them. Scandal after scandal - he doesnt even hide it! We surely cannot give this man an opportunity to lead the country!