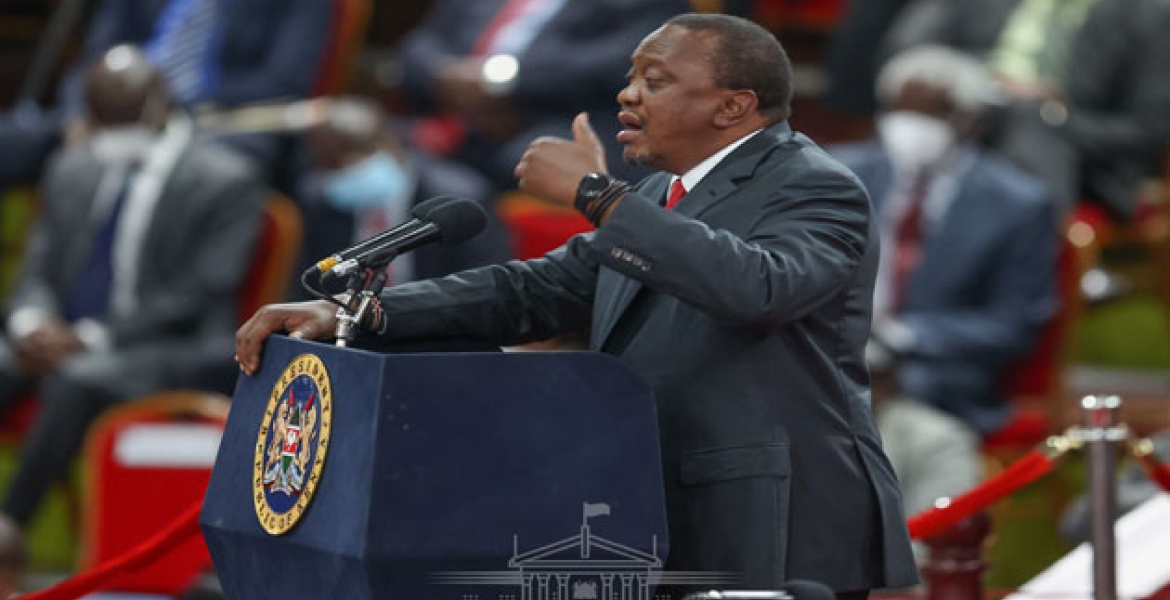 President Kenyatta has faulted Deputy President William Ruto for conducting early campaigns and urged him to tone down.

Uhuru, who spoke during the launch of the Building Bridges Initiative (BBI) report at the Bomas of Kenya on Monday, accused DP Ruto of abandoning the Jubilee agenda midway to focus on the 2022 elections.

“My brother DP Ruto and I were walking together until 2022 came into the picture, and he lost focus, I’m asking you to leave 2022 alone, that will come too, be patient,” Uhuru said.

He likened DP Ruto to a relay runner who dashed in the wrong direction after the baton was handed over to him.

“I was telling Kisii leaders the other day when they visited me, Ruto is like a relay runner who was waiting for the baton to be passed, my brother William has turned his back and is running in the wrong direction,” Uhuru added.

During his speech at the function, DP Ruto was heckled by delegates who demanded he respects the president.

Ruto expressed his reservations against the BBI report and went on to highlight some of the recommendations he does not agree with.

They include the proposal to allow political parties to participate in the process of appointing IEBC commissioners, the creation of an independent office of the Judiciary Ombudsman, and the establishment of a police council headed by a Cabinet Secretary, among others.

The launch was attended by several leaders among them Raila Odinga, Kalonzo Musyoka, Musalia Mudavadi, Moses Wetang’ula, and Isaac Ruto.

Ruto is a permanent thief no matter how you look at it! It has been his way of life and it will not change now!

Being hyena like greedy is a terrible thing - Ruto is that hyena!

He has been campaigning with the full support of Uhuru Kenyatta.

Secession is the answer.

Why have you not left our beautiful country your wart? Go die on Somalia and please do not return to Kenya! You think you seceding is a big deal? You are just an extra burden to Kenya! Wewe mafi ya Kuku!

Am not from Somalia.

Your hate towards the people of Somalia is well noted.

Somali’s are not going anywhere by the way. Get used to that.

@guesty - ya you will be dead on arrival in Somalia! You can jump into a pit latrine and live in there! That is where your secession will take place!

Wanjinga sisi kweli.
We are fighting each other and UHURU, RUTO,RAILA and the rest are drinking margaritas together.
WAKENYA TUELEFUKE.

Being a laser-sharp Politician is a trait of a highly seasoned Leader. Deputy President soon to be President knows how to keep his opponents in panic mood. When his soon to be throne is threatened,he had no choice but to flex his campaign muscles. He is the man to beat come rain come sunshine and even to come 2022.

Wii!!! If wishes were horses even beggars like you would ride!

Ruto is a razor sharp guy alright! He is razor sharp in stealing poor people’s land like that of Mr Adrian Muteshi whose land was stolen by Ruto.

Muteshi has just died because of the stress Ruto put on his heart to a point Muteshi did not live to enjoy 2017 winning a land grabbing case against Ruto!

@hakiyetu, you ought to be ashamed of yourself telling us about a damn thief in the whole name of a deputy president! Wewe huna haya and folks should mob justice you because of being a thief supporter!

@Sobure..moron like you don't even deserve the right of reply. Mob justice because of protecting a thief! Do you have a compelling evidence that DP is a thief? If you have, then I support your right to have a day in court with DP. Present your evidence to antigraft unit and they will schedule a court date for you. If you don't then shut your beak! You're just parroting what your ears hears out in the street. ..and for that matter, anyone else who may have any evidence that DP is corrupt, file corruption case. Read and do research under what circumstances DP was sold the late Muteshi farm!

"...“My brother DP Ruto and I were walking together until 2022 came into the picture, and he lost focus, I’m asking you to leave 2022 alone, that will come too, be patient,” Uhuru said.

They pretend that this BBI is going to solve tribal animosity. ! It’s not. For example if Karua is a sole runner against an opposing sole runner Peter Kenneth, we will end up with president and prime minister from the same tribe!!

William Ruto has been campaigning with the support of Uhuru Kenyatta.

Raila needs to ditch BBI and start campaigning for himself and his people.