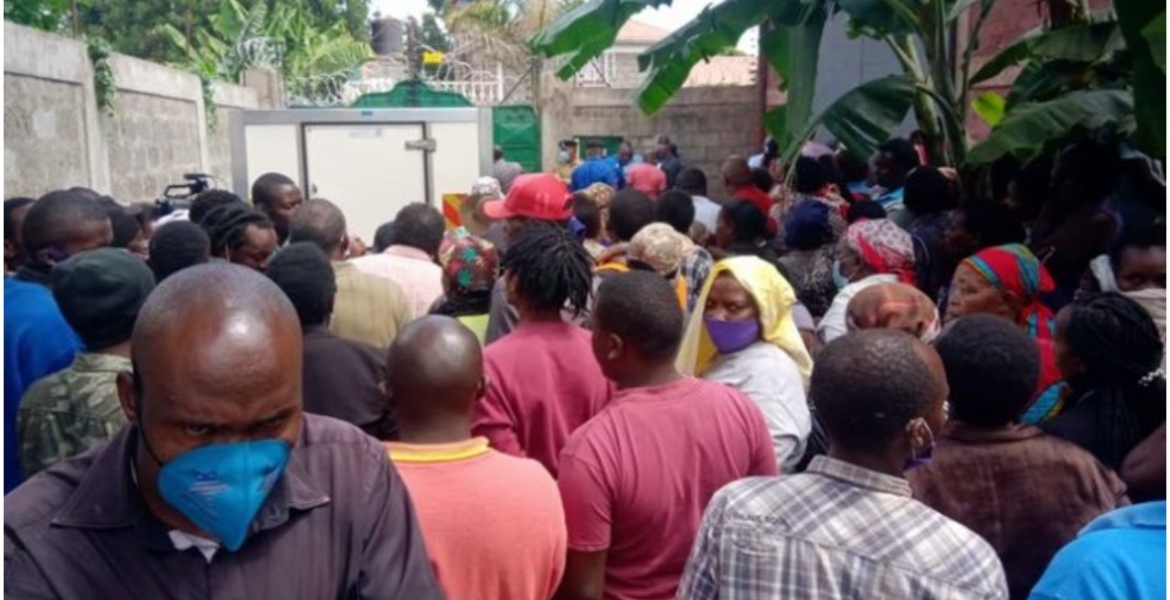 Nicholas Njoroge Warunge, the Kenyan man who was murdered alongside his family in their home in Kiambu County, was working in the US as a nurse.

Njoroge, his wife Wanjiku, their two children, niece, and farmhand were killed by unknown assailants this week.

The lifeless body of 55-year-old Njoroge was found lying within his compound on Wednesday morning while his wife, kids, and niece were found murdered inside their palatial house in Karura village in Kiambaa. The home is well secured with a perimeter wall that is 10-feet high.

The dismembered body of their casual laborer was found in a neighboring compound the previous day.

Njoroge’s brother Njire Warunge said that he came to Kenya from the US on December 4th last year to reunite with his family. His wife also worked as a nurse at Wangige Hospital in Kiambu.

“We have not witnessed this kind of crime in the area for at least 10 years. It was not robbery because nothing appears to have been taken away,” Nuhu said.

Neighbors said they did not hear a cry for help from the family. The bodies of the deceased were taken to the Kenyatta University mortuary.

An investigator who spoke to The Star on condition of anonymity said family members are the first suspects in the crime.

"The way this home is guarded, it is clear that there are issues in this family. We are treating them as among the suspects," the source said.

It also emerged that Njoroge’s brother was murdered under mysterious circumstances in 2016 by unknown people while another was shot in the hip while driving home in 2019.

RIP, again.
It's a murder most foul.

Is there land dispute with the relatives?

Very sad indeed. I have known njoroge for many years in Kansas city. I work with him. He was a very hard working and was always jovial. He loved his family. I pray and hope the culprit will be brought to books. Wishing the family strength during this trying time. Our heart and thoughts are with you. Rest in peace my friend.

@Mungai may your friend and his family RIP and may the culprits face justice.

@Peter Mungai,having known your friend this long,do you have any thoughts as to what might have happened?I know sometimes its had to talk about family issues,but from my own personal experience,diaspora are good especially if they pour and shower money on relatives,but get in trouble when they try to"dictate"things".Not suggesting this is how things unraveled,but one cannot not rule out family feud.
But to kill the whole family,its a horrific act of unimaginable magnitude.
someone somewhere can shed the light on this matter,but whether they will step up will depend on their conscience.But I hope for the sake of justice they do step up.

It is the brutality that shocked me. 39 times with an excavation chuma...jeso! How angry was the killer? By the 10th stabbing somone is as good as dead. To add 29 more?

@Seneca, exactly what does being a son or daughter of Mumbi have to do with this?You make the same uninformed statements about us that many whites make about those with an abundance of melanin. Do you fit the anti business, fish loving, no money sense, violent, troublemaking, lazy, stone throwing agitator stereotype? We can all throw stones(pun intended) and use stereotypes when it suits us but it serves no purpose other than to inflame passions.

Hehehe...my fren, Hii vituko ya Kikuyuland is too much. As your concerned fellow citizens...we advice that you retrace where the rains started beating children of Mumbi. Is it when they decided to off the true heroes of Maumau like Kungu Karumba and made their children Mungiki, ama mlikosea wapi? These things are more common among your people. Nothing wrong with being Mumbi-child; we have noticed a public health issue there, thats all. Mara, grandmothers raped in some constituency in Nakuru daily...these brutal killings over property?. What is sad is that this Njoroge worked for his money...he did not steal like the Gichurus and Rithos...nkt. We love you, but we must tell you to your face...you need to reconnect with your gods. And don't even try to accuse me of ethnicism, I did not create Kameme and all that 'Kikuyu this and that'

What do you mean wakikuyu?
So no other murders happen except in kikuyuland.come on Angels are only in heaven.

Statistics and trends. Let us not bury our heads in the sand. You wnat us to lie here that the madness in Kiambu or the old-women rapings in Nakuru are common in other regions too? Once we identify why these Kiambu-sque brutalities are common in centro, we can start to solve and help...to include the society at large. Kina Waiguru looting NYF, kina Lilian Wanjiku looting NSSF, Kina Uhuru's nieces looting covid funds...wewe huoni kuna shida hapa?

That part of the country (Wangingi) is known for thugs. Family members are the worst enemy in the area. You do tell anybody there your plans or movements. This will end up being some family members who killed this family!

I met Njoroge more than 17 years ago when I lived in Emporia Kansas and even after he moved to Kansas City, we kept our friendship. I remember him to be a gentleman full of determination. I knew he would succeed in whatever he chose to do with his life. Very humble and good man. To Allah we belong and to Allah we shall all return. RIP brother. My condolences to his family.

not everyone is happy when you succeed!!!

Exactly! I have been there and know it for a Fact. It's Kenyans against Kenyans; both in Kenya and Diaspora; both by Friends, Relatives, or Business partners. And it's due to Envy, Jealousy, Hate, Unfair/Insecure competition, Refusal to Pay back or Accunt for Money lent or Invested; or just pure EVIL.

It is sad. My prayers and condolences to tye berieved family. I want to call upon on diaporans to be very carefull and vigilant when returning home. Like all times, when one is associated with usa mist people think one has a sack full of money. Think out onnsecurity and defense when traveling home. Avoid sharing too much infor on any social media. Avoid puting up thise high wall fences as they only help the thieves to cover up sieges once they sneak in.Invest more on security ware and weapons. Practise drills and lastly know the people you allow close to you. may the good lord rest the departed in eternal peace. May peace not be portion to the perpetrators of this crime.

RIP NJOROGE.
HOPEFULLY SOMEONE WILL BE HELD ACCOUNTABLE.

Something appear to be someone who is a relative is very jealous of them extremely jealous and determined to finish them.

Yes one brother murdered, another brother shot in the hip and now him stabbed to death. The number of stab wounds alone is an indication that this was personal. This seems like definitely someone that knew. I hope justice is served in this case.

They also say that his brother was killed in 2016,the other brother shot at in 2019......and one of Njoroge elder son is not answering the phone.....
Diasporans, invest most of your money in the country which you reside in.....

This looks like revenge to exterminate the family. Considering similar deaths have taken place. It is really sad. Land issues are bad.😭

alot of key board detectives here,why dont you guys stop feeding the police with wrong gossip and instead pray for the family that was left behind

No body has said anything out of content here! Kenya is just a dangerous place to be or visit. That is the fact and you can’t deny that! The detectives already have an idea how the murders happened!

Those Kenyans who live abroad should never let their guards down when visiting Kenya! You gain lots of enemies when you work so hard to do something for yourself and family.

It is hard to trust even your own blood relatives anymore. Very sad indeed to have the entire family wiped out in this gruesome manner!

The killer knew this family well. The notorious Matheri came from Wangingi! The place is a hub of crooks, thieves and murderers!!

This is just Horific, and the sad part is the culprits will never be known since everything in Kenya police is money. There are no investigators in Kenya, Police are the other crooks

The murder of this Man and his family really bothers me...I have tried to blow it off as 'Kyuk madness', but it really, really is wrong on so many levels. I am even hurt and I do not know him. For a man to leave his family, with all the humility, work hard, put up with the rubbish in the US as a black male nurse, keep his family together (a rare gem in diaspora and Kenya), and they kill him like that? Why? Why? What for? For what?

It is not enough to say Diaspora buy stockand invest in the US. We need some representation in Kenya. He was part of the revenue Kenya brags about every month "Diaspora sends billions to Kenya"...now they have killed him.

Now, I dont care if it is his son, brother or mother who killed him. How can diaspora protect their interests and their own in Kenya? Diaspora cannot keep floating the economy of looters, and get killed the minute they try to as much as yawn. There is a problem.

A Njoroge petition and Bill must be sent to parliament to demand for diaspora citizens some kind of security and help.
Who is in Washington DC? I think that it is time to mobilize.

In my humble opinion,lobbying or petitioning the Jubilee government will achieve nothing. They care less. They are focused on plunder and political re-alignment.

It shall begin with confronting and rectifying what Kenya has become-an enclave laden with impunity, graft, immorality, impropriety, unaccountability, disregard for God, humanity, life, rule of law, idolizing money or material wealth...the list is endless. The debate lies within.

The youth and middle-age lot of Kenya are a direct product of close to 60 years of deplorable misrule. I may not capture this well through my views but the context is concise.

damn it is fucked everywhere!!no place to run folks