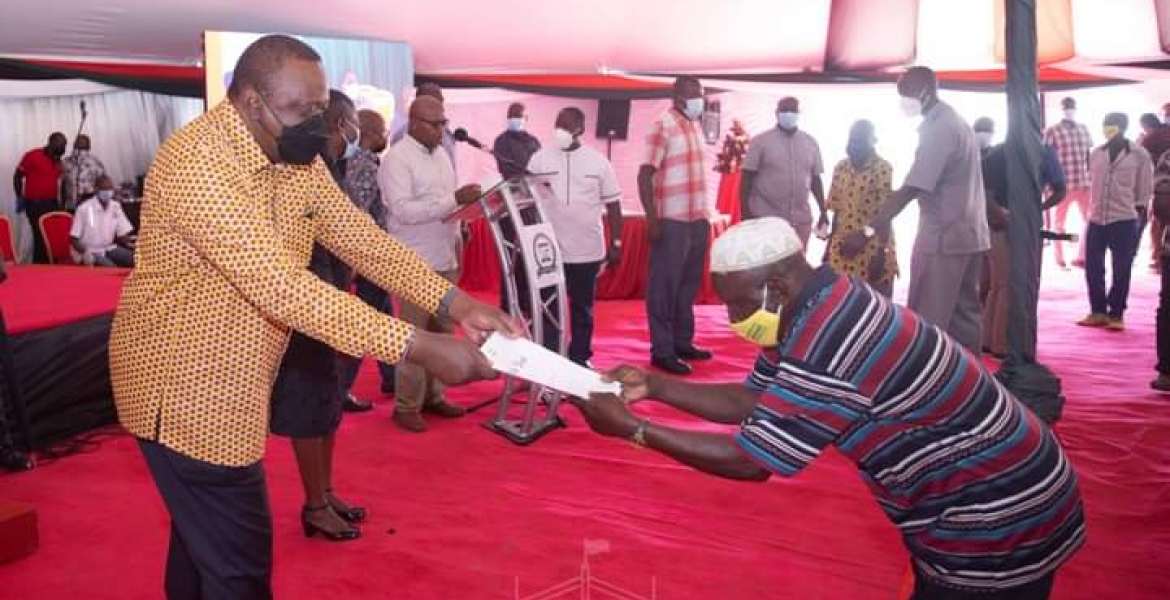 President Kenyatta says the push for constitutional amendment through the Building Bridges Initiative (BBI) is still on course.

Kenyatta, who spoke on Thursday during the issuance of 2,100 tittle deeds to residents of Rabai in Kilifi County, said the BBI is intended to bring solutions to the problems bedevilling the country such as historical land injustices.

“...We want to pass this BBI so that everyone can have good representation and his voice can be heard,” Uhuru said.

Kenyatta further defended his 2018 handshake with ODM leader Raila Odinga, saying their clamour to unite the country would continue and urged Kenyans to shun divisive politics.

The Court of Appeal is on August 20th expected to deliver a ruling on an appeal against a High Court decision that declared the BBI constitutional reform process unconstitutional.

At the same time, Uhuru said his administration is committed to solving the problem of land that has beleaguered the coastal people for decades.

“I had given a promise that I will not be a letter to invite,but a leader to bring solution to problems that are affecting the people of the Republic of Kenya, among them the land problem in the coast which has remained a thorn in the flesh,” said Kenyatta.

Kenyatta's administration has issued more than five million titles since 2013 compared to only 52,000 titles issued from independence to 2013.

Kenya borrowed KSh 60 bn every month in 2021- 2 bn every day!! Will these amendments redress the plunder of public funds? Or are amendments another avenue to borrow more money for thieves to steal.

5 Million since 2013?! Sounds like dreams of grandeur.
Weed and alcohol are a lethal combination.

Mocking the intelligence of the people of the Coast region is also another reason they hate the entire Uhuru Kenyatta and the entire Kenyatta family.

Bure kabisa. Retire and close the door behind you . Pure mockery when this family owns 0.17% total land in Kenya. Should give solutions to 2B shillings stolen a day under your watch and ooh culprits tied to your family.. like sonko or atwoli would say “shenzi”

Kenyan may not even need constitutional amendment; we may finally move towards God's law.
Let us keep watching this space. In Kenya spirituality is slowly taking hold and man's law is proving to be a law of unjust weights.
" Ee mungu nguvu yetu"!!

MAYBE, JUST MAYBE, THE BULLET WILL DELIVER US FROM THIS MISERY.
A BULLET NEVER LIES.
WE NEED TO DO WHAT HAITIANS DID.
KENYA NEEDS TO BE CLEANSED THROUGH BLOOD.