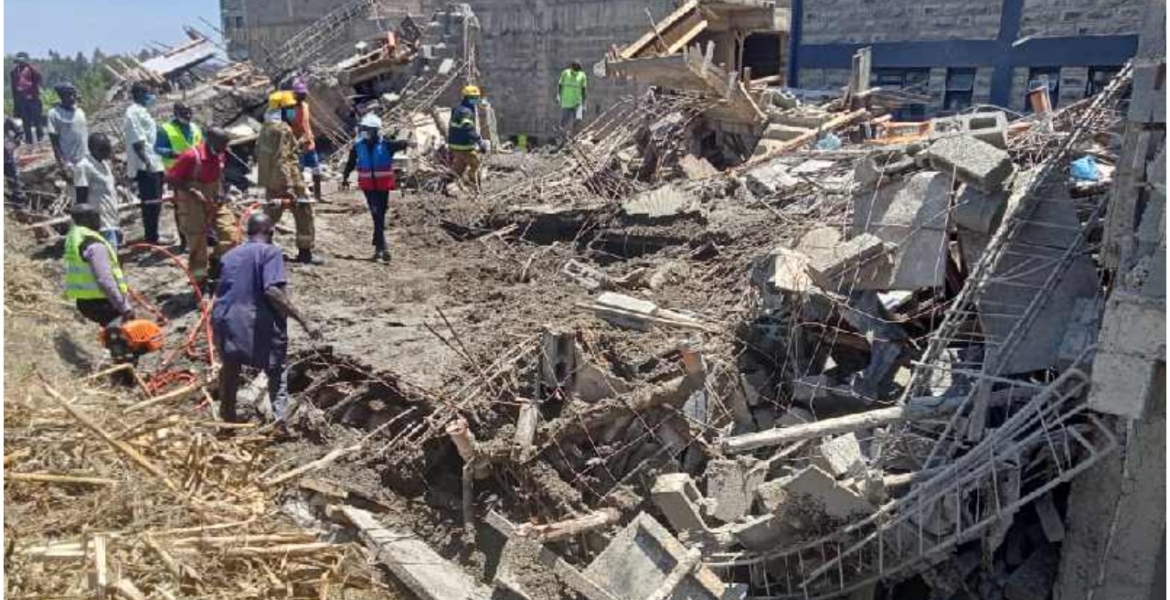 An unknown number of people are feared trapped after a two-storey building under construction collapsed in Mamboleo, Kisumu on Monday.

Four construction workers who survived the ordeal were rushed to the hospital with injuries and efforts to save those trapped are ongoing.

A female food vendor who was serving the workers on the construction site is among those trapped under the rubble.

One of the survivors Joseph Okeyo said the incident happened in a flash as the workers were having their lunch.

"We did not anticipate what happened. We just heard a cracking sound and then the building collapsed," Okeyo told The Standard.

A mother and a child who was crying inside the building were rescued by residents moments after the structure caved in.

On August 30th, a five-storey residential building collapsed in Gachie, Kiambu County, killing three people. More than 10 other people were rescued and taken to the hospital for treatment.

This came days after the structure partially collapsed in an incident captured on video.

The shady corner cutting builders putting every body at risk and danger!! They builders steal material and cement and now their theft is coming in five star status! Very sad indeed!!

How many times are we going to hear of these collapsed buildings? The builders should get their a tstogwther and do a quality job! Nonsense! This crap got to stop bugging kid g shacs that kill people!

Why complain then vote for thugs and murderers?Uhuru confessed leading other thugs to EAT shs 2b. daily.What else do you expect if the presidential favorites are jambazi Ruto and fake engineer Raila?Why do some Kenyans believe Uhuru and Raila should loot as they own them(Kenyans)?Or do you think the county employees,police,chiefs,clerks etc does not have pockets like Uhuru,Ngilu,Raila,Joho or Ruto?

This is outrageous. Why are the local and national governments not issuing safety and quality regulations for buildings like in any civilized society? Where are the architects, engineers and contractors to be held accountable? Their professional bodies should take the lead in enforcing professionalism in their midst too.