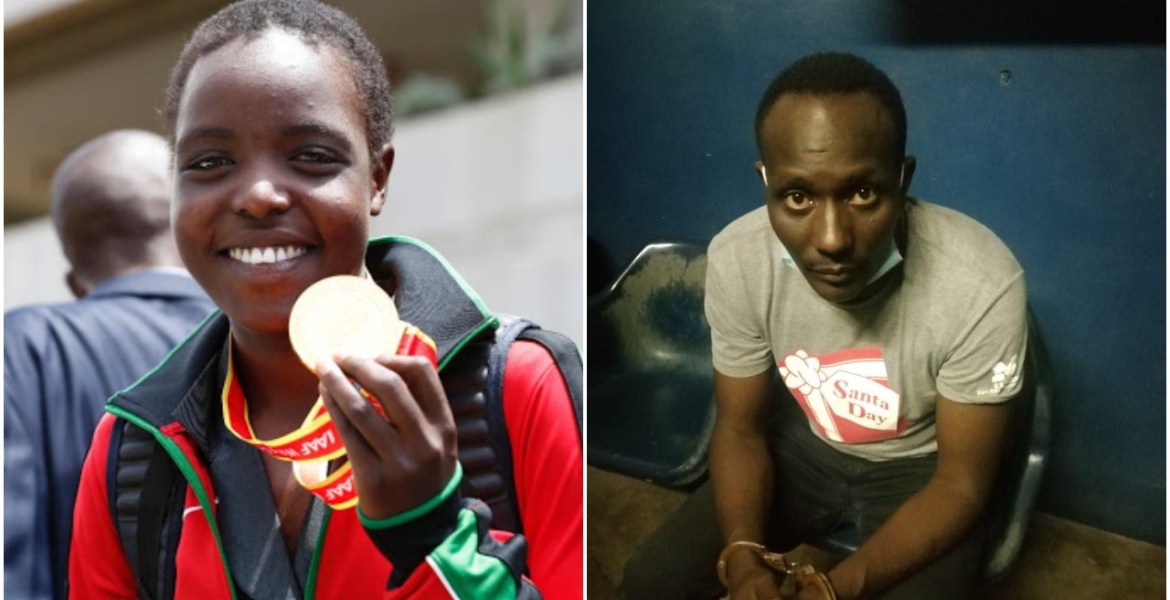 The husband of slain Kenyan long-distance athlete Agnes Tirop has been arrested in Mombasa county.

Ibrahim Rotich, who is the prime suspect in the murder of the 25-year-old runner, was apprehended in Changamwe on Thursday night as he tried to flee to a neighboring country to evade justice.

The Directorate of Criminal Investigations (DCI) said Rotich had earlier in the day rammed his getaway vehicle into a lorry at Mlolongo along Mombasa road as he escaped.

He is believed to have killed the two-time World Athletics championships bronze medallist by stabbing her before going into hiding.

The lifeless body of Tirop was found lying on her bed on Wednesday morning in her home in Iten, Elgeyo Marakwet County. The body had visible stab wounds on her abdomen.

He is being grilled by detectives at Changamwe police station before being arraigned in court to answer to murder charges.

Police had earlier urged Rotich to surrender to authorities to assist in the investigations into his wife’s murder.

Tirop represented Kenya in the 5,000 meters at the Tokyo Olympics two months ago and finished fourth in the finals. Last month, she shattered the women-only 10km world record in Germany, crossing the line in 30:01 to shed 28 seconds from the previous 19-year record held by Morocco’s Asmae Leghzaoui.

Early this month, Agnes finished second in the Giants Geneva 10K race. She won bronze medals at the 2017 and 2019 World Championships in the 10,000m, and also won the 2015 World Cross Country Championships.

This retarded should have brought in public what is happening in family before committing EVILNESS.

He was haunted by her blood. He had to give himself away by causing an accident. The parent's of Agnes said he was not married to her. So he was just apparently a boyfriend. RIP beautiful angel.

Congratulations people of Mukweya village,Bungoma for killing Sonko/muuaji Wanjala.I fail to understand why tribally appointed IG Nzioki is still heading the killer police service if Raila Wanjala can escape from Jogoo Rd police and travel to Bungoma,265 miles away.How can he dodge more than 30 roadblocks,200+ police stations and hundreds of useless patrol policemen or did he fly?

Tirop’s love ones should organize for a REVENGE immediately Rotich is released on bond/bail.They should not expect any justice from Karambu’s corrupt judiciary.WEKA TIRE.