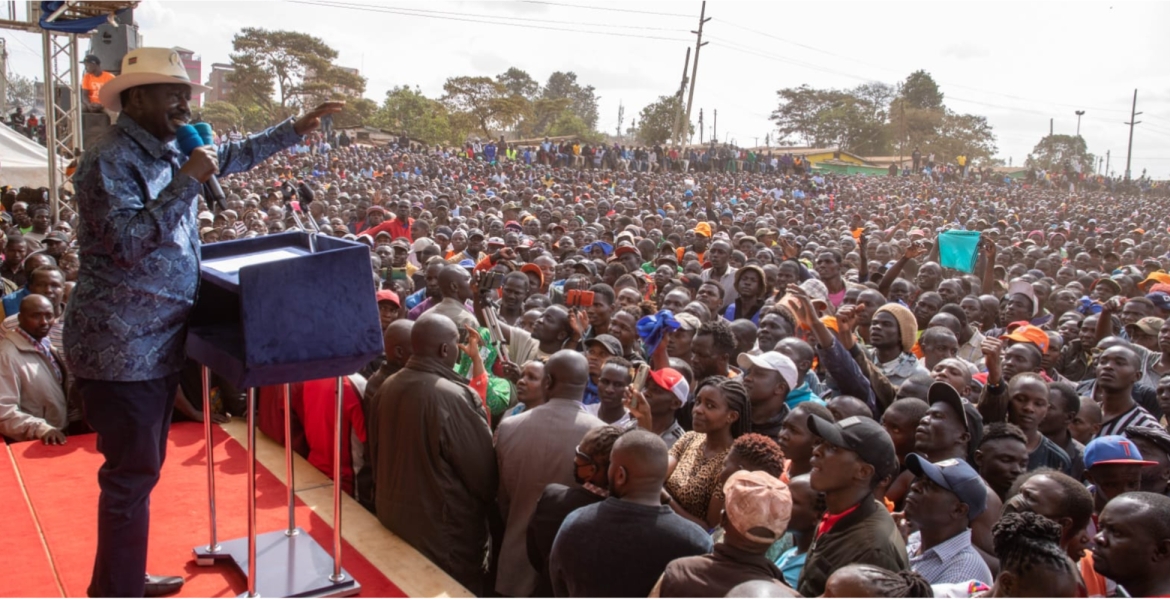 Azimio la Umoja One Kenya coalition leader Raila Odinga has called for the resignation of President Ruto and the entire Kenya Kwanza government.

Addressing a public rally at Kamkunji grounds in Nairobi on Monday, Odinga maintained that the August 2022 presidential election was rigged in favor of President Ruto, which makes the Kenya Kwanza government “illegitimate”.

“We demand that the Kenya Kwanza government resigns since it has neither the mandate nor the ability to govern the country,” said Odinga.

Odinga, who just returned to the country from a weeklong visit to South Africa, urged his supporters to oppose Ruto’s administration, adding that he does not recognize him as the president of Kenya.

Odinga spoke in the wake of the recent dossier by a purported Independent Electoral and Boundaries Commission (IEBC) whistleblower claiming that he defeated Ruto in the August 9th election.

But the whistleblower claims Odinga won the election after garnering 8,170,355 votes ahead of Ruto who reportedly managed 5,919,973 votes.

He further faulted the Supreme Court for upholding Ruto’s victory, saying the judges were equally compromised by so-called cartels.

“We know what happened next at the Supreme Court. A compromised court failed to declare the true victor, annul the elections or order a rerun because of the glaring violations of the law and the constitution by the IEBC,” said Odinga.

“The Supreme Court itself was captured by cartels that had also captured the IEBC. The two most critical institutions to elections in Kenya were central to the rigging of the 2022 elections.”

Instead of creating chaos and violence in the country, petition the court for a new trial due to new found evidence. Going for demos and telling Kenyans you are ready to die is insane. However, Raila might be planning to be a martyr. He can use Kenyans to commit suicide. Be killed in a mass demo to suffer martyrdom for the sake of history- now that he is looking for an exit as the sun sets on his life.

Which courts??? There are no trustworthy courts in Kenya. Just look at the most evil woman CJ and tell me what courts you are talking about. What Raila is doing is the right path talking the matters of election to the Public to eject Ruto out of the state house by all means possible. It is the only way to stop corruption from n Kenya.

Raila is truly a man of the people. Look at the size of that crowd that willingly showed up without incentivization through handouts in things like unga or a few coins.

Raila’s demands are fair and square! A thief cannot lead a country; and it is not alright that ruto stole Raila’s victory.

Do you suggest Raila,a violent/killer robber who controls population by killing other people is better that thug Ruto?

Is RAO serious? How can you have a president,and his full cabinet resign?Does he realize what crisis that would cause?
Now is there any recourse for the supreme court after Raila has claimed its ineffectiveness and pretty much its hand in colluding with cartels to deny him victory?Is he not in actuality disrespecting,and showing contempt of court?...Or is this freedom of speech?
When is this recrimination going to end?
Looks like the handshake peacemakers have been praying for might just turn in to shaking of fists and finger pointing,while the voters are scratching their heads wondering why they even bothered to go the ballots.

King of corruption must go

The peoples conman should go to hell and burn 🔥 for eternity!!!

Why do we have Elections in Kenya when the losers never accept the results n always want to rally the people to start a flame. Handshakes are not what we vote for so Raila wait until next Elections n if u have evidence our eyes r open, let us see not just talk.

Rao Weeks ago he was acknowledging the head state b4 Prezo Ruto 2 days visit to Western belt ..Mzee is just overreacting to rumours without solid evidence...the government already on the move!!..unless he want to exit politics with historic massive bloodshed!!..

Rao just prepare succession. Imagine you fought Moi Kibaki Uhuru who are all gone. Are you a demon that lives until judgement day?

William Ruto is destroying the reputation of educated Africans.

The man is an absolute idiot.

You’re saying WSR is destroying the reputation of uneducated people. Did they have any to begin with? And that includes you.

And you are the most idiot kale walking blindly on the face of the earth. Some bush tribe like yours should never be close to power. Ngombe wewe!

And still …. plenty of idle cows to follow the peoples conman!!!

I second @Mkiratu regarding @Ezzy comment.....but i will add something small hahahaha this MF is a legit cancer in kenya!I thought we got rid of him and there his is...popping his head up again smh. Its sad that all those people still believe in him all this eyes later. Kenyans better be smart....no one should die no soul should be lost for this foo y'all!!! say something @ mkenyahalisi lol