'Githeri Man' Languishing in Poverty as Fame Slowly Fades Away 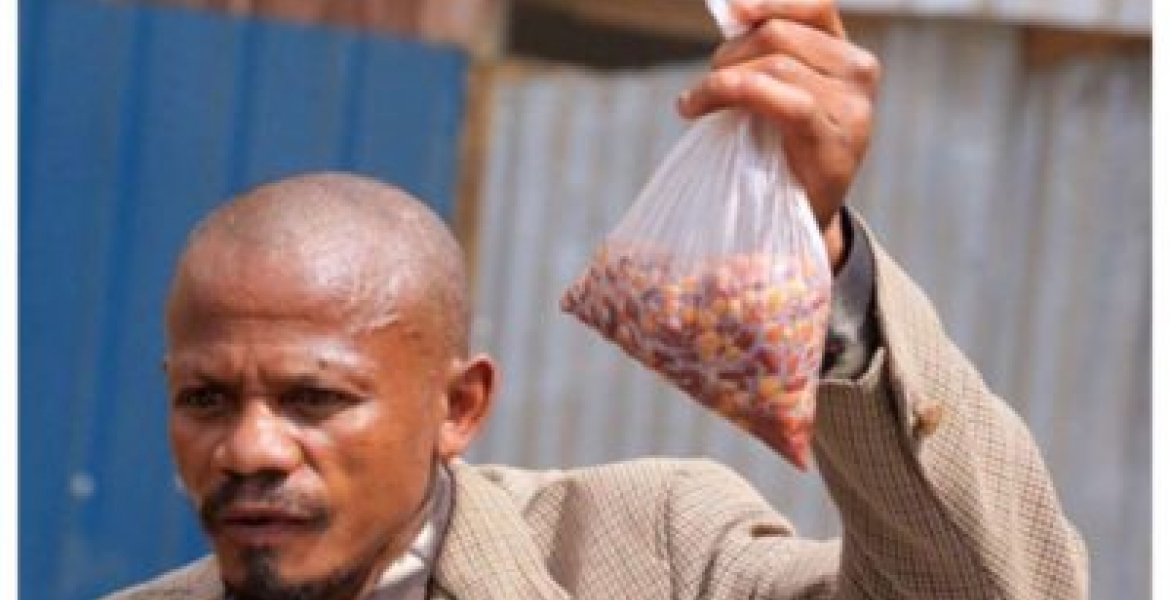 It has now emerged that Martin Kamotho alias “Githeri Man” is languishing in poverty despite receiving promises worth thousands of shillings if not millions.

Kamotho rose to fame two years ago after a photo of him enjoying a meal of “githeri” in a plastic bag while patiently queuing to cast his vote during the August 8th, 2017 election went viral on social media.

Having turned into a celebrity overnight, several corporates including Safaricom and Bonfire Adventures quickly moved in to capitalize on his fame.

He was offered all sorts gifts including parcels of land, suits, phones and many others.

The 43-year-old is currently struggling with life since most of the companies have not fulfilled their pledges to him, The Standard Digital.

The outlet says Githeri Man is currently living in a three by four rented house in Saba-saba, Kayole in Nairobi.

Kamotho received Sh100,000 token at State House in December 2017 after he was awarded a Head of State Commendation (HSC) for easing tension during the electioneering period.

The Nairobian reports that Bonfire Adventures has not fulfilled its promise of a Maasai Mara travel package to Kamotho.

However, CEO Simon Kabu says:" His trip is still available, we didn’t have his contacts but we are ready take him anytime.”

President Kenyatta’s stylist Carol Pulei also promised to dress Kamotho until August 2022 but he says this has not happened save for the one suit he was given in 2017.

Contacted, Ms. Pulei says:" Our gift for him is still valid, only that last year he had been admitted at the rehabilitation center, and I was also away in the United Kingdom.”

Kamotho is also yet to receive a plot of land promised to him by User Name Investment Limited.

Kamotho admits to misusing the more than Sh150,000 he received at the time but defends himself saying no one advised him on how to utilize the cash.

Kamotho was among 77 graduands who successfully completed a seven-month rehabilitation program at the Mama Care Rehabilitation Centre in Kiambu.

The Nairobian reports that Kamotho's wife has since walked out of the marriage.

Githeri man was better of when he was doing munjengo than this nonsense of giving money for doing nothing. He stopped working and used all the money he was given to drink himself to death. I would say do not give him even a penny. If you want to help him give him a job he will work 40 hours per week even more.

Kamotho even if you get ksh 10M you will still be poor and blaming others for your woes. You need some serious life lessons which should include financial education as well as anti-drinking classes/therapy for the rest of your life. What comes naturally to some even to Mama mboga is not natural to others.

This is a a typical tano tena story. Totally expected when tribalistic allegiances trump logic.

We must be really starving for celebrities to create one out of aman eating githeri.I dont see anything special about it. Ofcourse the man is not going to turn down the attention.Unfortunately this attention took him out of his real world and created a fantacy one for him.Atrue celeberity earns his or her status.Githeri man is back to his oldways,hopefully minus chang'aa,and lets hope that he builds himself up from there.Sorry the celebrity status was imposed on you,and it side tracked you.
The adulation that was showed upon you was fake.Where are your admirers now? This must be a heck of areality check for your Mr.Githeri.It is said that lightining never strikes the same place twice...dont know if there is an exception to this,but 2022 is not that far.I hope you still got that bag.

And Tribalists keep on making Fools of themselves.

That is what hapens when you get rich overnight! Even worse his wife walked away frm him! But what was he doing before receiving all the gifts? Anyway,he could start by selling his suits & start a githeri business! Waah! money is a very powerful tool! I've learned a lesson too, When you don't have money your wife leaves you! when you have alot of it,it comes with many wives!

@Andrew you got it all wrong. His wife of many years left him after seeing how foolish he became once he was showered with all the gifts and money. Alienda kukunyua pesa yote and who knows what else and became broke again. Alas, her eyes were opened!