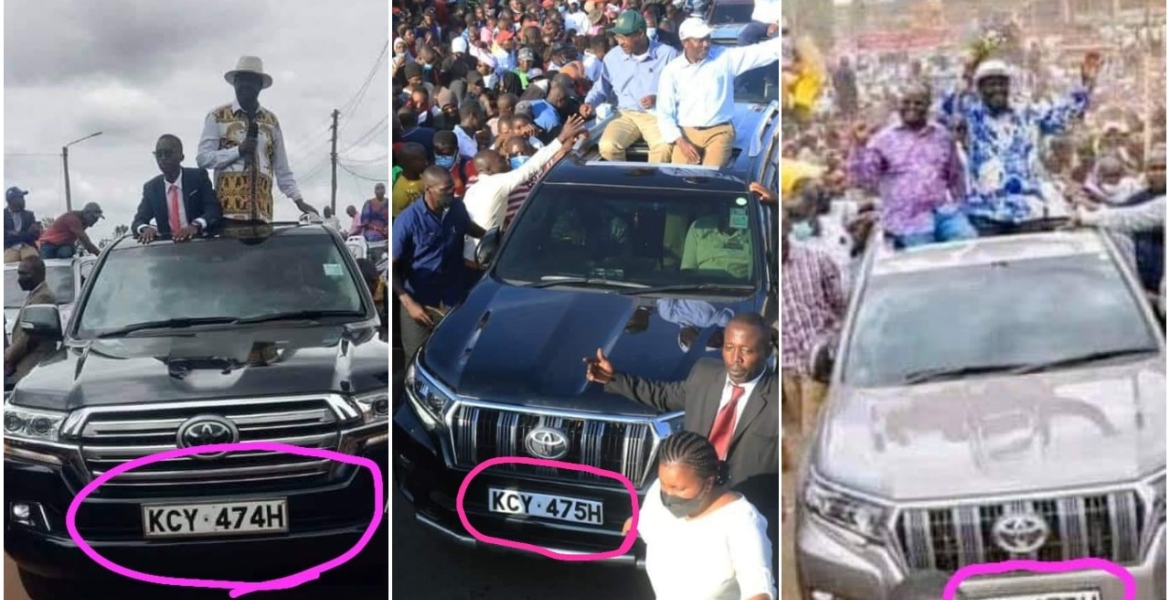 The number plates of cars being used by ODM leader Raila Odinga and One Kenya Alliance (OKA) principals has triggered a heated debate online.

On Monday, photos of the Toyota SUVs with almost-similar registration numbers emerged on social media, leaving Kenyans online in confusion.

Social media users questioned how the political leaders have vehicles with sequential number plates, with most of them saying they are government cars.

@benn_macharia posted, “They are all government projects.”

But Polycarp Hinga, a Jubilee Party member of staff, noted that Odinga, Musyoka, and Mudavadi are entitled to State cars by virtue of being former Prime Minister and Vice Presidents respectively.

“According to the Retirement Benefits Act the State is required by law to provide them with two saloon cars not exceeding 2000cc and one SUV not exceeding 3000cc every four years,” he wrote.

Odinga was also recently pictured on a campaign trail in a vehicle bearing a government number plate.

MP Kositany - first worry about DP Ruto’s stolen wealth including the helicopters bought with stolen money before you start analyzing what is not years! Umesikia Kaka mudogo??

These useless folks never do the job voters elected them to do! Unfortunately it is the voters who allow this kind of childishness to carry on for ever! They can chose better leaders but they opt for those in the bottom of the barrel! Such as Oscar Sudi, kositany, DP Ruto and so many others!

It's their understanding of responsible governance.

Outlaws like atur brothers. In case of accident u can only sue the high drunk in state house

Elections can only change Kenya if muuaji Raila is not running for presidency or even campaigning for his puppet.Mwalimu Kibwana and Mukisa Kituyi were the best candidates although both corruptly/illegally increased their salaries in early 1993 after being elected MPs in 1992.But rapist Mukisa is worse.He recently beat and raped a lady in Mombasa.