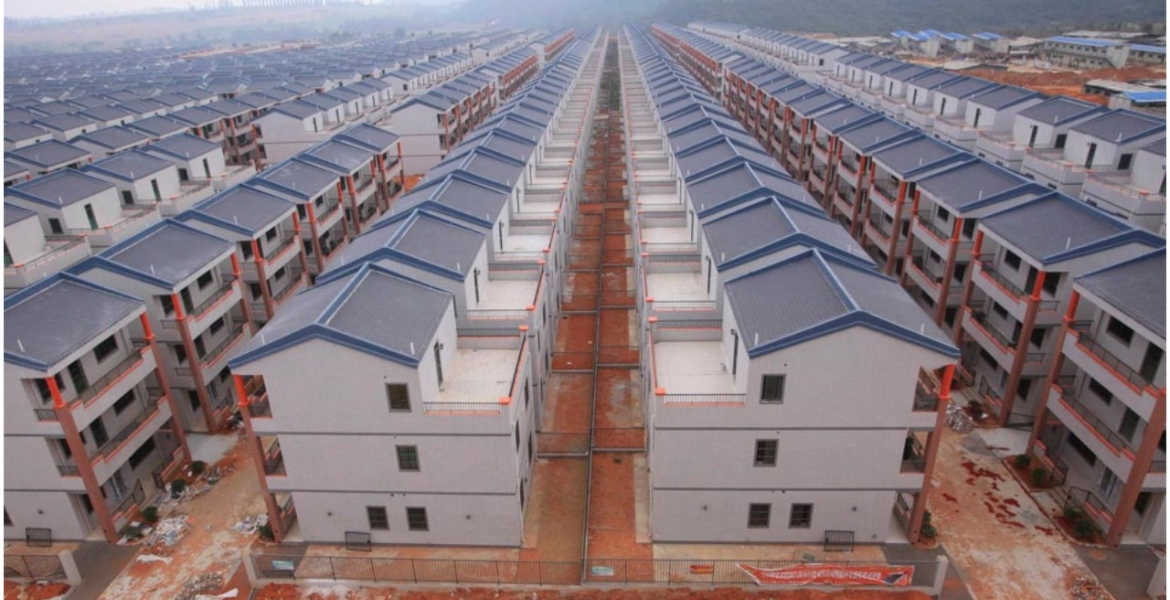 Real estate company, Clay City Developers Limited has raised Sh1.3 billion from the sale of 333 of its 5,200 affordable houses at Clay City along Thika Rd.

The developer is building the housing units on a 36-acre parcel of land through a joint venture with Housing Finance Development and Investment (HFDI).

“Clay City has an advantage because it is close to major learning institutions situated along Thika Road, which also offers convenience in accessing the city center, Industrial Area and is also a route out to the rural homes of many Kenyans,” said Wamae.

HFDI is a subsidiary of HF Group incorporated in 2013 and has developed estates like Komarock Phase 5A and 5B, Buru Buru, Precious Heights in Riruta Satellite, and Kahawa Downs on Thika Road.

I like the idea of low cost housing in Kenya. However, it seems like the developer is too ambitious in terms of the number of units they can fit on that parcel. If that photo represent the actual planned development, then it will be too CROWDED. It will be similar to the projects in the states.

Ideas and comments are good. Low cost has to come with sacrifices. Crowded makes it affordable.

This one looks like a high class refugee camp.

Surely, tell us about amenities...that sells more than one poor picture....a picture showing stacked up houses with no breathing space...congestion that almost suffocates from one mere look...

military housing I guess, who approved the plans and why would anyone want to live so close to other people you can even hear them fart.

In Europe, they have been demolishing such housing estates with many buildings so close together after a myriad of problems associated with putting people in such structures. There are no green spaces, no playgrounds, fire escape routes, and spaces for rescue services.

Great views about this project. When I first saw it, I was like this is a good deal. Now, after reading comments here, I have to re-think. All points here makes sense.

Good luck getting water in this place. Too crowded. Developers were too greedy. Townhomes would have been better.

The word affordable is relative.My interpretation would be that,it is affordable if the average working Kenyan can afford it.We should be thinking of how to do away with slums like Kibera,Mathare,and Majengo.

I see nothing wrong with these homes. People still co-exist in kibera in tight quarters.

Poor use of land. The greenhouse signature if that provided picture is the actual housing project is huge