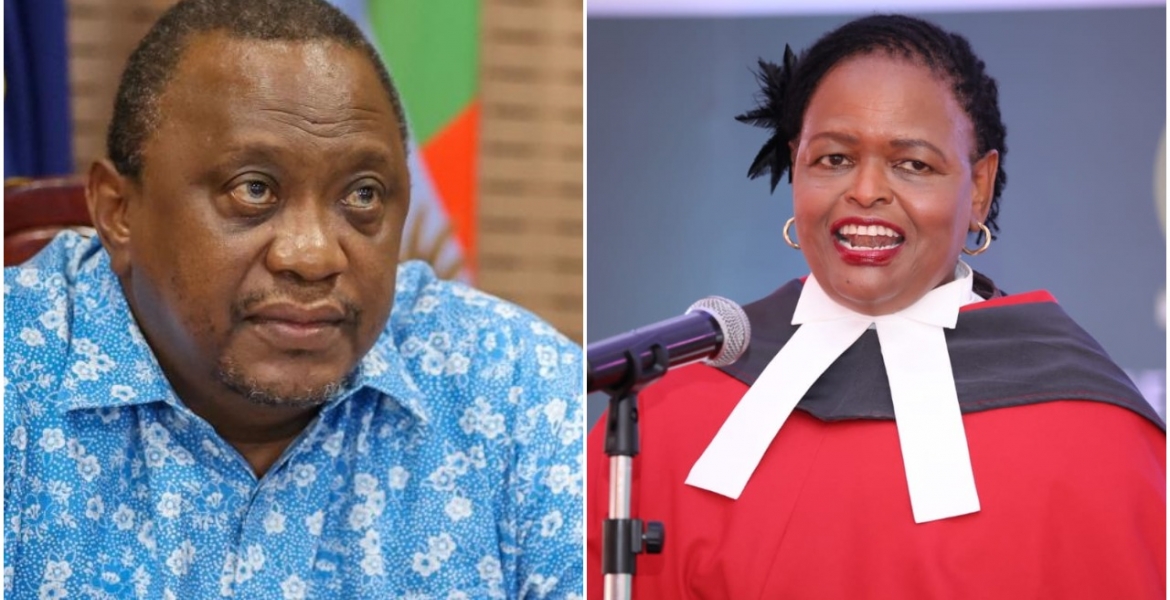 Through a statement, Koome said the president breached the Constitution by appointing 34 out of the 41 judges recommended to him by the Judicial Service Commission (JSC) in 2019.

She added that the move is tantamount to the president not respecting the rule of law and the independence of the Judiciary.

“We call upon the President to appoint the remaining 6 judges because the Judiciary is still in fire need as the backlog of cases is increasing,” said Koome.

She added: “No person or authority is allowed to direct the JSC or the Judiciary in the execution of their mandate.”

Speaking during the swearing-in ceremony for the 34 judges at State House on Friday, Kenyatta insisted that his actions are in the interest of the country.

He noted that he could not ignore available information putting into question the integrity of the affected judges.

“Just like you today, I too took the oath to both the letter and the spirit of the law and it is not open to me to turn a blind eye to reports of our state organs,” Uhuru said.

President Kenyatta had delayed the appointment of the judges since July 2019, citing integrity issues on some of the nominees.

CH Koome - the judges were rejected because they have been using wives and other family members to receive bribes for them! It is mainly the case with Ngugi and Odunga!

They are very corrupt thieves. You should be working directly with executive to eliminate all the corrupt judges and lawyers.

Karambu seems to be begging jambazi Uhuru instead of using the law to demand that he appoint the remaining judges.This confirms Ngatia’s claims that his pass marks were reduced in favour of Karambu.It is obvious that thug Uhuru or his so-called intelligence have no evidence of corruption against the four judges.Or can those supporting thug Uhuru explain why he hasn’t appointed separate commissions to investigate them?Karambu must act as a Chief Justice or resign.

If the judges are corrupt or tainted why not hire more who are less tainted or not as corrupt because when it comes to the judiciary they are all tainted.If there is such a backlog of cases as you claim help lower the unemployment rate in Kenya and hire more “qualified help”most people would care less who hears their case as long as they get their day in court and their files do not disappear.If you want to tussle with the president flex your muscle with the BBI and quash it or just delay delay and eventually deny it by that time elections will be over

We want judges who are as white as snow! There is nothing like a less corrupt judge!

Does CJ Koome understand that simple fact? I’m beginning to think she is corrupt too to ask the president to appoint thieves with all kinds of bribery scandals!

When are we going to clean our country if every time a thief is presented for approval it gets done?

This is why judges are more corrupt than the politicians! Kenya belongs to all Kenyans and not to the judges!

CJ, I support your voice, Uhuru is or has been breaking the constitution he sworn to protect, so sad but praying for you CJ for God to use you to revive the integrity of judiciary

The Supreme Court should just declare that it is not necessary for the president to officially appoint Judges, for them to become Judges. You cannot have your cake, and eat it. If he is not required to cherry pick the recommendations, then there is no need for his stamp of approval, as the choice has already been made. You cannot force a human being to make a particular personal decision, as is happening now in Kenya.

Madam Chief Justice, please also state the law which explicitly states that the president should ignore his own Conscience, when appointing Judges.

I do not think Uhuru needs any of the judges in Kenya to tell him what to do! He has a mouth to speak for himself and he could care less what any body thinks.

Uhuru must follow the law.Kenya is not his property to do whatever he wishes.The law requires he appoint a commission to receive evidence and deal with any inappropriate judge but he has none to back his rejection.Uhuru,a robber who recently bribed 2600 MCAs with shs 2m.each to pass BBI and confessed presiding over looting of shs 730b per year has no moral authority to accuse others of corruption.

Koome too little too late . next time go pronto

Cj koome knows the six judges do not belong to the judiciary! They are all corrupt!

@menye you hit nail on the head