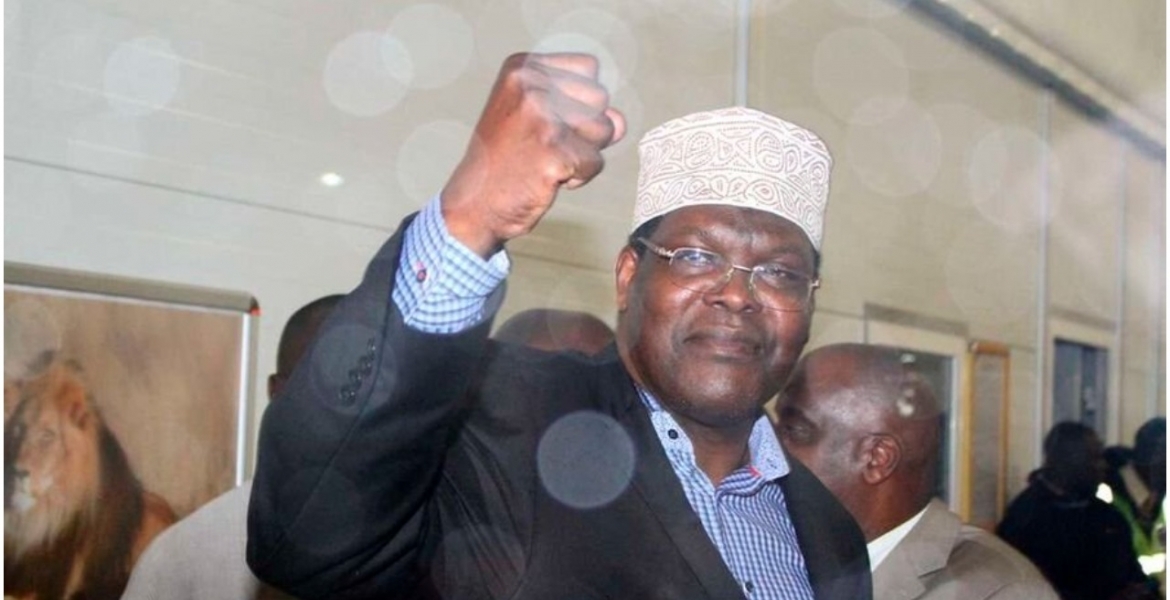 Former Chief Justice Willy Mutunga has asked the government to allow lawyer Miguna Miguna to return to the country.

Speaking on Tuesday, Mutunga stated that no person is above the law, adding that court directives must be obeyed by everyone regardless of their status or position.

“Miguna has a court order that grants him safe passage into the country. Ideally, he should be able to enter and leave the country as he pleases but that is not the case,” said Mutunga.

He added: “The government has put a red alert notice on him and as such, no airline can fly Miguna home. The regime should act in a civilized manner and lift the red alert so that the court order can be enforced.”

Mutunga further castigated the government for failing to pay the compensation package awarded to Miguna for damages made to his home when he was being forced out of the country.

“The issue is not whether people like Miguna or not. His predicament can happen to any of us.  These court orders have to be followed through. The judiciary doesn’t have the capacity to enforce them. It is the government that should do it and so it puts the judiciary in a very dangerous situation where people see it as a toothless institution,” he noted.

Miguna was forcefully removed from the country in February 2018, days after his arrest over his role in the mock swearing-in of ODM leader Raila Odinga as the ‘people’s president’ on January 30th that year.

He tried to return to the country on March 26th, 2018 but was denied entry, detained at JKIA, and later forced into an Emirates Airline flight to Dubai.

Indeed, no one is above the law.

The Kenyan Judiciary is becoming a demagogue, which thinks that it is above scrutiny. How else can you explain a situation where Judges are issuing 'orders' for other Judges not to be investigated, or prosecuted, when involved in crime? Are they not human beings, like the rest of us? And are they above the Law? And what makes Willy Mutunga, and the Kenyan Judiciary, think that they can extend Kenyan Judiciary arrogance to the international stage? The Kenyan Government does not have the power to disobey international laws of traveling, because it does not control them. And yes, they aslo apply to Miguna Miguna. And JKIA, as an International Airport, follows IATA laws. If it failed to follow these laws, for whatever reason, including Kenyan Judges 'orders', it would just be removed as an International Airport, and Airplanes coming from outside Kenya would not be allowed to land there. Kenyan Judiciary should realize that Kenya, and by extension Kenyan law, has boundaries. Kenyan law is not enforceable outside Kenya. And International Airports, just like Foreign Embassies, though physically in Kenya, are not part of Kenya.

Mutunga should have gone further and stated that ABOVE THE LAW,Raila is more dangerous to country’s security than DM(DOUBLE MIGUNA).Uhuru & Co. acted like ICC’s prosecutors who indicated watu wa Milimo,Uhuru&Ruto in the Raila sponsored,07/08 PEV but left the main actors,Kibaki&Raila.All I know is DM is calculating or “counting” billions compensation to be paid by hungry billionaire Kenyans for illegal EJECTION from Kenya by the useless president.

Jealous of Miguna for what? No body pays attention to Miguna in Canada! He is a no body! Only in Kenya crooks like Miguna, maranga and Willy mutunga think they have a voice!

But Mr Willy Mutunga,when you castigate the government of which you were part,why should we think that you are sincere?Even though you are retired, Iam sure you hold vast amount of power via you connections that can sway a decision.Let's see what you can do.

@maxiley - mutunga has no power! He is just a retire Kenya just like any other kenyan! Let’s not prop his rear end with accolades he does not have; or never earned! Mutunga is just another rebel like Miguna!

What did Mutunga do or did he know when he served as the chief justice of kenya as it pertains to legal and social injustices in Kenya? While I empathize with Miguna’s case, Mutunga should be the last person to speak matters injustice! Such a coward speaking off the throne! Why not talk when he was in power??

Willy mutunga has a deep childish angle to his naive thinking! Who cares about them damn court orders to allow a mad Miguna back! The laziest man calling himself a general to cause chaos in Kenya! Wacha akae huko Canada!

Kenya is bigger than your nonsense Miguna Miguna! Stop raising up a fist because that does not provide food on the table for ordinary Kenyans!

You and Mutunga have been fighting the system for ages. The legal system is not the only thing that exist in Kenya! Most lawyers and judges are plainly corrupt and unreliable. Most of you are worse that street crooks! Give us a damn break Miguna and Willy!

What have both of you accomplished in the past 84 years you have lived in this earth that we can talk about Miguna Miguna? This kind of selfishness must cease forthwith.

Come back to Kent but be freaking productive to make sure you leave inheritance to the youths! Other than that, you can just stay in Canada if your goal is come to Kenya to be another Covid19!

Muguna! You just look like a retard with your ugly fist in the air! Stop your arrogance and understand there are better things Kenyans are concerned about! Wacha ujinga!

Why pay Miguna Miguna for collateral damages he incurred to his house when he was acting stupid!? These old fools like Mutunga are useless! Tax payers have been paying murunga but now we have to turn around and pay another stupid fella? Nonsense! Do not pay him!