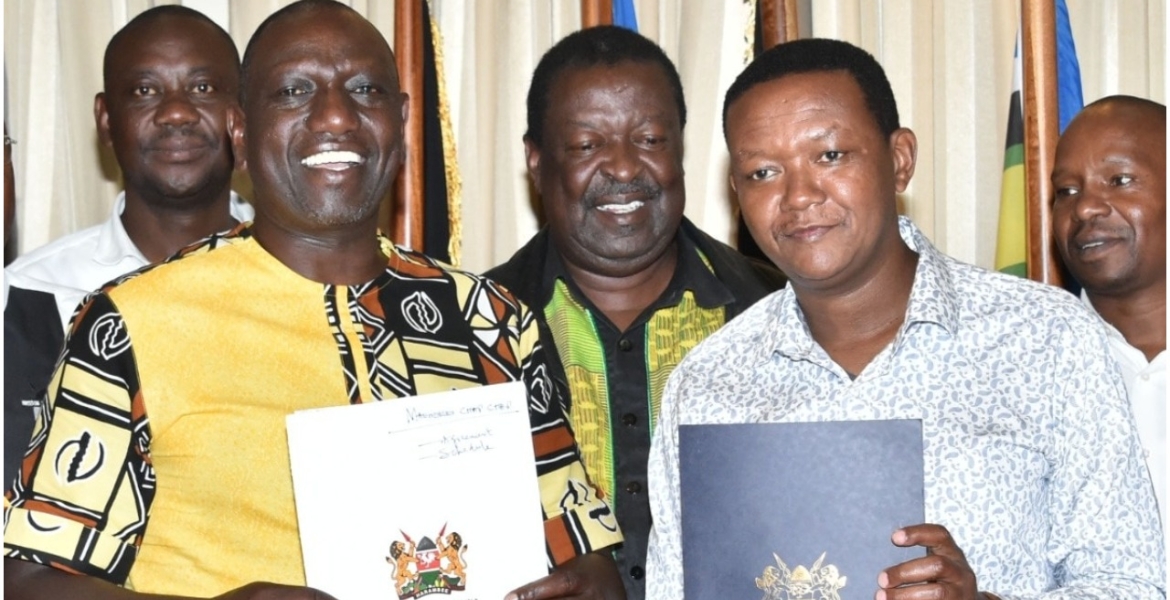 Ruto praised Mutua, who is the leader of the Maendeleo Chap Chap (MCC) party, for rejecting what he termed as politics of “blackmail, deceit, and conmanship.”

Mutua claims he was excluded from the affairs of the Raila Odinga-led outfit and could not access the agreement signed with the coalition’s affiliate parties.

The two-term governor vowed to traverse the country to drum up support for Ruto, who is eyeing the presidency on a United Democratic Alliance (UDA) ticket.

“I will transverse Kenya campaigning for William Ruto as I believe he is the best president to take Kenya forward,” Mutua told journalists at a Nairobi hotel on Monday.

Ruto said, “watajua Hawajui” on the same day he burned 37 kikuyu women and children inside the Kiambaa church in 2007. Ruto is indirectly using coded language to warn the Kikuyus.

So every kikuyu traitor in UDAku fully comprehend what Ruto’s intentions are but they are all bewitched to be killed on the same hill by Ruto. Mutua and Kalonzo has nothing to loose. Beware folks.

@ Mathenge, thank you very much for remembering those innocent Kikuyus- children, women and men that were burnt alive in a house of God. Some of the victims of that most horrific crime; the work of deranged and mentally sick Raila and Ruto, (it must be remembered that Ruto was not running for president in 2007-it was Raila's program. The buck stops with Raila!), were not old enough to vote, yet they suffered a most painful death because of the vote!

Did you study in Russia like Huyu Mzee? That Mzee is as guilty and more when it come to murder.

Mutua just lost his chances to ever been a respected National leader. The kind of dirty politics being played by these thugs have no ordinary kenya citizens in sight. It’s all about a few brats who have been stealing from our country from time immemorial. Mutua is a big coward to betray the Kenyan people. How is he going to travel across the country to sell a guy he has referred to as a thief?

Mutua looks ashamed of what he is doing. He should be ashamed.

And what Mutua does not know is that Kenyans and not voting for parties but for individuals . Hence joining UDA is only for him personally but not for Wakambas . shame to Mutua no wonder Lilian left him and he has been told he has to pay her her shares he transferred to his sister

Fake Loise speak for yourself.

Lillian deserves every share she can get. Mutua is a thief like Ruto stealing Mzee Muteshi farm. Birds of a feather flock together. Mutua wanted RAO to bribe him to stay in Azimio. Mutua only cares about his fat stomach. Lillian should not take a share less of all the shares she got in the hotel, and she should keep them there so they can grow at Mutua’s sweat.

What is in it for the average Kenyans except the big players selling Kenyans for political greed? Does Mutua have any pride left in his belly?

Mutua, I am sorry you are transversing on a road to nowhere. You seem not to be smart as I originally thought. If you cared about Kenya you shouldn't have joined a coalition of losers whose ego is beyond limits. You have joined the likes of Watengula and Mudavadi whose Luyha tribe consist only 2.7% yet the master of corruption and deception has promised them 30% of the national cake(and ironically they believe it). Mutua, what % of Kenya's national cake do you want for the Kamba tribe? 20%, 30%, or 60%?. You, Watengula and Mudavadi are delusional!!. You are not thinking right!!!. Uhuru should NOT hand over the button of leadership to your like minded people. Leaders like you are extremely dangerous for Kenya!!!

Uhuru keeps weakening Raila. I bet he's got nothing to lose as both R's will protect trillions of dollars he has.

Mutua has been a Ruto mole in Azimio. He was kept in the darkness once Azimio realized a traitor was consuming them from inside. You would think Mutua cared about the country in the hands of Ruto.

Mutua has been a Ruto mole in Azimio. He was kept in the darkness once Azimio realized a traitor was consuming them from inside. You would think Mutua cared about the country in the hands of Ruto…

Mutua and Mudavadi both knew all along they had no significant future positions in Azimio because they have presidential ambitions and that will not sit well with Baba and Uhuru. After what Uhuru has been going through with an ambitious and defiant DP, no presidential candidate with an iota of sense would want to have the likes of Mutua, Peter Kenneth, Karua, Kabogo etc in visible positions. Who wants someone who would have a parallel office and undermine the boss.

If Mutua had seen coalition agreement then Raila was the best to move Kenya forward. Now that he hasn't seen the agreement as he claims then Ruto is best to move the country forward. All political prostitute.

Hyenas at the top of their game.
That's the reason why UHURU and RAILA were pushing for BBI. Several PMS, SEVERAL VPS, and CRAP. But thanks to JUDICIAL SYSTEM, BBI was scrapped.
It would have to a great power sharing tool the HYENAS. Now POLITICIANS will show their true colors.
But, NYASAE doesn't feed on UGALI.
Kenya belongs to the MASSES.
Please let's get these HYENAS once and for all.

Well, it’s now coming out that Mutua has several corruption cases pending with the DCI and KRA. He has now joined his corrupt buddies in the UDAku wing. All the corrupt politicians seem to find a home in UDAku. Kenyans beware.

They are being bought left right with stolen Euro bond proceeds and those earmarked for Arror and kimwarer. This mega thief is so blatant but the silent majority will speak on 08/09/2022. Let this UDAku maggots keep up the dream. They’ll be shocked!!

I saw those words last week on the list of banned word.

csn we forget from Moi era when Ruto started taking Legally bought land from non Kalenjins the brutal murders of innocent Kenyans, disappearances and theft including that Weston hotel is standing on stolen land . what if he becomes president Kenya will suffer suffer suffer . He is no friend of anyone outside his clan . so support him at your peril . prayer is not enough vote against him is the only answer to our problem facing us

In 1992 Ruto conducted mass killing of Kikuyus in Nakuru town under YK92. Ruto is a seasoned murderer and he will kill more Kikuyus should be become president by accident. All the signs are up that Ruto will kill madoadoa as he call kikuyus. Linturi was paid to inform all the kikuyus that Ruto is after their tabloid and land. Stop being deceived by Susan kihika, Moses Kuria, Waiguru, Nyoro, Kihara, Alice Wahome, etc. they are all paid to confuse the kikuyus. And they are doing a good job confusing the greedy kikuyus.

In 1992 Ruto conducted mass killing of Kikuyus in Nakuru town under YK92. Ruto is a seasoned murderer and he will kill more Kikuyus should be become president by accident. All the signs are up that Ruto will kill madoadoa as he call kikuyus. Linturi was paid to inform all the kikuyus that Ruto is after their tabloid and land. Stop being deceived by Susan kihika, Moses Kuria, Waiguru, Nyoro, Kihara, Alice Wahome, etc. they are all paid to confuse the kikuyus. And they are doing a good job confusing the greedy kikuyus…

Mutua PHD is from school of IDIOTS he is an imbecile fool. what is he thinking he will know soon that he will come empty handed

The faces of thieves of Kenya’s coffers have been posted here for all to see. The chief thief is working hard to get all the most corrupt graft oriented crooks in UDAku. Now you can see them all and don’t say you didn’t know when you vote for Ruto. The dude is terribly unfit to be the president of Kenya.

There is nothing to smile about Mutua. You are simply a snitch; bottom line. Kalonzo may have let you borrow his watermelon tag. You are now the new watermelon as you have badly bungled your political career because of greed.