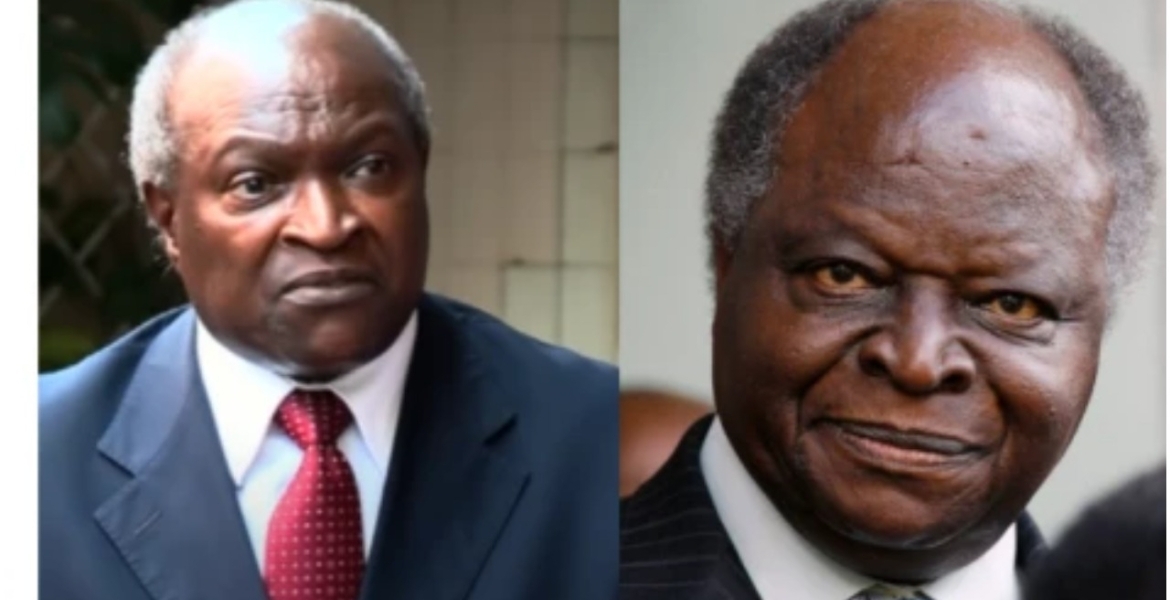 The High Court in Nyeri has dismissed an application filed by a man claiming to be the biological son of the late former President Mwai Kibaki.

Jacob Ocholla, 62, wanted the court to compel Kibaki’s children Judy Kibaki, David Kagai, Jimmy Kibaki and Anthony Githinji to reveal whether his name was included in a will he alleges was drafted by their father before his death. He also wanted the family compelled to recognize him as the firstborn son of Kibaki and give him an equal share of the former president’s wealth.

He also wanted the court to determine who will be appointed as administrator of Kibaki's estate, expressing fears that he may be excluded from the distribution process as he was ignored by the former president’s family when he attempted to reach out to them on the same.

On Monday, judge Florence Muchemi dismissed the application, stating that Ocholla’s plea had been overtaken by events since Kibaki’s children have accepted probate by filing a succession suit at the High Court’s Family Division in Milimani, Nairobi.

“Currently, the citees in the suit–Judy Kibaki, Jimmy Kibaki, David Kagai and Anthony Githinji–have done what Ocholla wanted them to do,” judge Muchemi ruled as quoted by Nation.

The judge further directed that the matter is heard at the High Court in Nairobi as Ocholla has already filed a response to the succession suit in Nairobi.

Through lawyer Omoke Morara, Ocholla requested to have the matter moved from Nairobi to Nyeri, but Justice Muchemi ruled that even if this was done, it would still be enjoined with his succession suit.

“Therefore, staying the matter by giving it another mention date will not serve any useful purpose as it is already before another court,” said the judge.

Ocholla says he was born in Nairobi’s Kaloleni estate in 1960 and grew up not knowing that Kibaki was his father until his mother made the disclosure in 1982, a year after his adoptive father, who hailed from the Luo community, passed away.

“When I turned 21, the person I knew as my father died. A year later, my mom disclosed to me that the man who had raised me was not my biological father. She told me she was going to talk to my father and introduce me to him, which she did after a month or so,” Ocholla told Standard Digital in a past interview.

“I never expected it to be the late president [Kibaki]. It’s not been easy for me having grown up speaking and thinking that I was Luo only to realize 22 years later that I was not from the lakeside tribe. I wish to state clearly that I am not the brother to the late president, I am his biological son.”

From then on, Ocholla claims he remained in constant touch with Kibaki and would occasionally visit his Muthaiga residence and official office in Nyari to exchange pleasantries.

This man was going around town telling anyone who was willing to listen that Githeri Man is his brother.

He's always running to the media to tell his story, with very little facts. He should make public his birth certificate. Not only might the certificate include name of his father, it would also indicate his place of birth. And we are still waiting for him to explain his inheritance from his other "fathers".

I have talked about deals that are made when one president leaves office. This is one of them. All they needed was a simple DNA test.
But based on the kind of deals cut , this will never happen.
Think about what Kenyans went through Moi, did anyone see the inside of jail?
Think about the political assassinations that have happened since independence, how many have been convicted?
Think about the purge after independence, Kenyatta ended up terming Maumaus as terrorists to appease this foreign masters.
It's time we started from within and start healing.

DNA or DNA you can't force yourself in inheritance no matter what. Kibaki had already prepared his will. Even your own father can deny you inheritance. It all depends with how you treat him.

@Bmore, you are right.Inheritance is not a right,but a privilege.If your parents raised you till you moved out of"the nest",interms of responsibility, there work ended there.You can dole out your prodigious wealth to whomever you want to.I See a good number of Americans bequeath a good portion of their wealth to organizations such as those that rescue animals; to the chagrin of their blood relatives.In Kenya these relatives would cause a revolution...

@ JustMe, I dont believe that Kibaki's family is denying blood relationship. The contention is whether Qchollakibaki should get a piece of the pie left behind by Kibaki.Seems like the court says NO.My opinion is that if Kibaki truly recognized Ochola as his son and their is evidence to that he should get something.I believe any man with a sound mind would do that.
Unfortunately, sometimes greed drives people to contest a WILL that stipulates the wishes of the deceased simply because they want more or want to replace it with their own WILL that would dis inherite some.

what if President Kibaki was a peasant would you run around looking for his wealth. Furthermore why did he not include you in his will before he died. Money hungry kenyan .

Kalibaki just like Nyeri men alikaliwa chapati. What makes men not settle such easy stuff early in life and leave useless silver and gold to bio kids. Money is just a tool..the wife who sat on him is long dead, money didn't save her life.

The way I read this ruling is that it’s just a continuance of this matter by a higher court not necessarily a dismissal on the merits of the case!

Yes, Kibaki kept it secret for political reasons and his rejection son did the same to protect his father politically, but that does not negate that Kibaki had a son with another woman!

In addition, probably Wambui could have killed Kibaki if she ever learnt the truth! Remember that forced presser under the gun of his wife — I only have one wife, Lucy?!?

The family needs to grow up and acknowledge the fact that they have a brother by another mother!

I don't know why people are vilifying this man. He is Kibaki's son and has a right to his heritage. Mpende msipende. AlA!