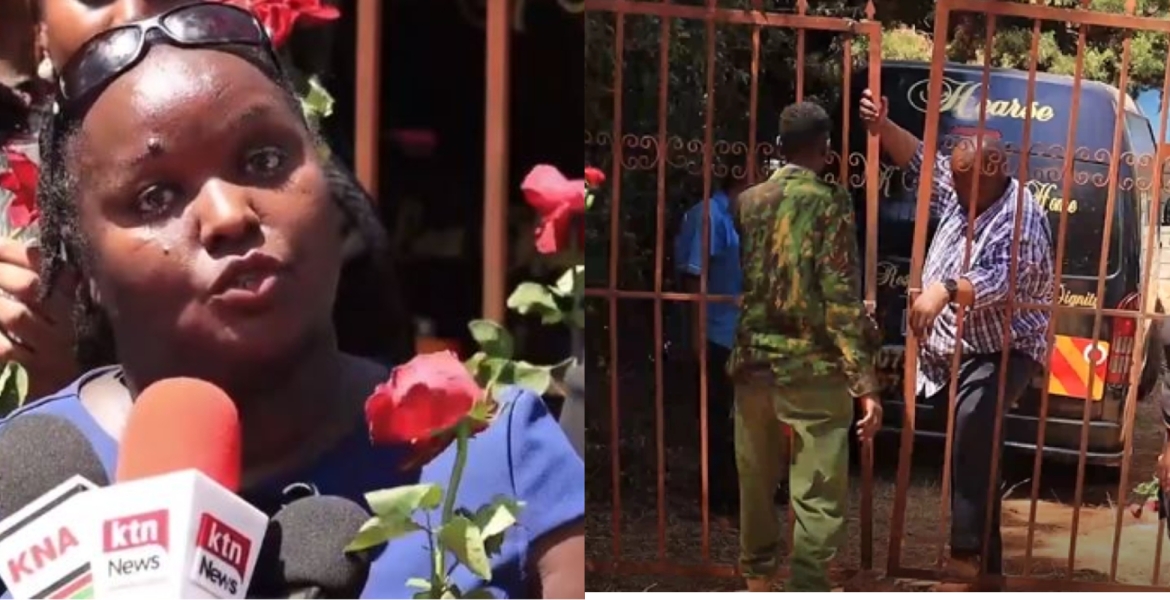 Drama unfolded at St. Mary's village in Kiharu, Murang'a County on Saturday after a woman who traveled from the United Kingdom was blocked from attending the funeral of a man she claimed was her husband.

Jane Kasunta arrived at the home of the late George Karanja in the company of her two children aged 12 and 2, close family members and friends but they were not allowed to get into the compound.

Though she admits she was not legally married to the deceased, Kasunta said she has lived with him in the UK for the past 17 years and that he is the biological father of her kids.

She added that Karanja died from cancer and wished to be buried in the UK but his family insisted that his body be repatriated.

"He had told me he would wish to be buried in the UK but his family was of a different opinion which I did not object," Kasunta told reporters outside Karanja’s home.

“When my partner died, we did not have any issues. In fact, he held and squeezed my hand and told me ‘look after my children’”.

"I don't know why I was barred from attending the funeral of my partner and father to my children, but maybe his family has reasons best known to them," she said. "I have friends who had paid for air tickets to come for the burial but they were also locked outside.”

After a tussle, Kasunta's 12-year-old son was allowed to attend the burial. "My other son is two years old and he could not go by himself so he stayed with me," she added.

All that so that they can rob the dead man whatever he had to his name before death! It’s egregiously preposterous!

This tbing of:
"He had told me he would wish to be buried in the UK but his family was of a different opinion which I did not object," is Bullshit!
Men!!! If you Wish to be Interned abroad, make SURE you Put it in WRITING (a Will). And if Your wife Mistreated or Abandoned you During ILLiness, also Put it in Writing for People to Know after You die😩.

They blocked you because they do not want you to claim and form of inheritance! It’s always money/property driven!

Hii masamba makes people thought to be intelligent act strangely.Maybe the brother thought Kasunta will cannibalize his dead brother.How can you allow the children to attend the burial but ban their mother?But pole.

Sounds like Jane was not legally married to Karanja either through customary law or church wedding. They should have allowed her to attend as the mother of his children though.

To fully understand why Jane was treated like that by Karanja's people, listen to a 70s song by the O'jays called "For The Love of Money".

The burial had nothing to do with this kind of treatment.
It purely based on GREED. Let's focus on what Kenyans in diaspora do, we send a lot of money back home for our personal developments, Buying Plots, building Rental properties, personal homes, cars, etc, I bet this family knows that Jane Kasunta was part and puzzle of what George Karanja was involved in and knew he was married, but now, they just saw an opportunity of keeping all to themselves.
I truly believe Kasunta contributed alot.
This is purely GREED.
RIP George Karanja, RIP.

He did not marry for a good reason.

May God give then grace both families

But why didn't he marry her and make everything official. Woman blame your baby daddy not his people. Lakini some Kenyan men can be so stupid and when they die they leave so much MESS behind. Nkt! Stop dilly dallying and marry that woman who bore your children and is hoping and praying for the day your balls grow big enough to take the next step with her if you're one of those stupid men. There is no perfect time nor perfect condition before you can officiate things... It's just your selfishness that's stagnating you.

Is the fat man at the gate the brother? Say no more, he looks like corruption and greed personified.