Kalonzo Will Go it Alone unless He is Named NASA Presidential Candidate, Insists Francis Nyenze 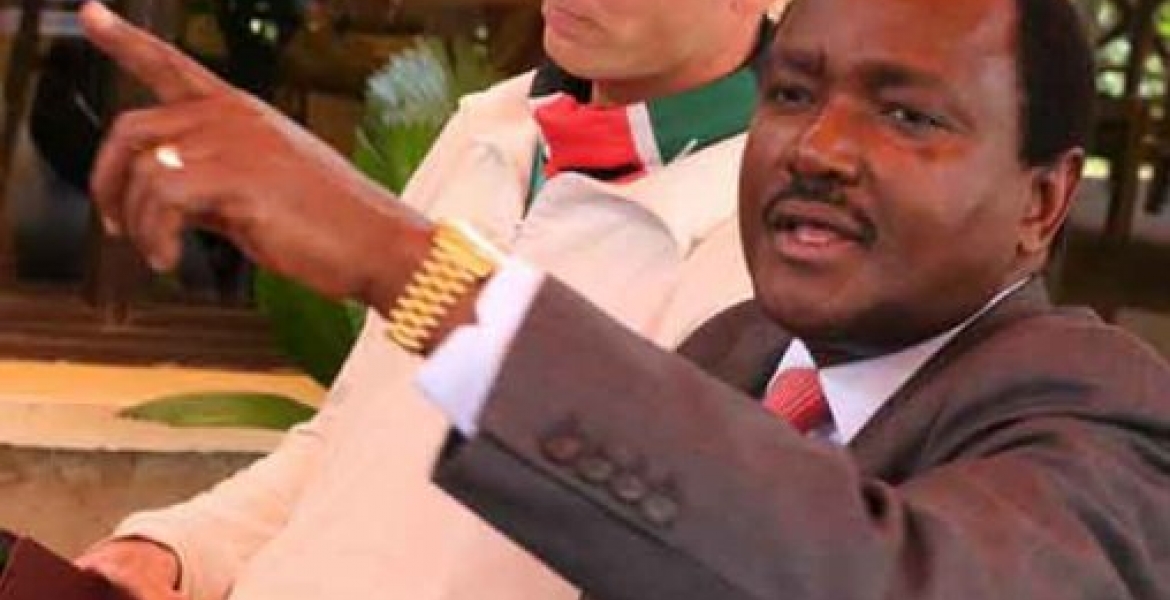 National Assembly Minority Leader Francis Nyenze has again said Wiper Party will only support NASA if Kalonzo Musyoka is named the presidential flag bearer.  Nyenze clarified that the decision to walk away unless Kalonzo is not the flag bearer was not his or that of Wiper alone, but has been made by the people of Ukambani.

“This is no longer a request. We are not begging, it is a demand we are making. It is either Kalonzo or there will be no NASA, at least not including the Wiper party…When you hear me saying this, do not think it is the position of Nyenze, or even that of Kalonzo. This is what the Kamba nation has decided,” said Nyenze.

Nyenze urged Raila Odinga to honor the 2013 Memorandum of Understanding (MoU) signed between the ODM leader and Kalonzo, which stipulates that Kalonzo will be the flag bearer in 2017. “We cannot keep trusting people who are running away from the agreement they made, just so that we can appear to be gentlemen…“The agreement was as simple as Wiper supporting Orange Democratic Movement (ODM) leader Raila (Odinga) in 2013, and a similar gesture being made in 2017 to Kalonzo, irrespective of the outcome of the last polls,” Nyenze added.

Here comes again Honorable Kalanzo. As stated previously this is not a man to be believed or trusted. He is a serial Flip-Flopper and also highly unpredictable. Nobody knows what his agenda is or what he want. Like Charity Ngillu and other Kamba politicians his Flip-flopping is part of wide Kamba culture that pre-dates 15th Century. It is embedded in his DNA. Those that claim Kalonzo want this or that are just misleading people because even the man himself does not know what he want. His case is not like that of Raila Oginga. Raila has an agenda. it is a known factor that Raila is a socialist who was educated in the former communist Soviet Union and East Germany and whose agenda has always to turn the clock on what he alleges to be ill gotten gains obtained by a section of Kenyan society.

Joni hanene lord of poverty raila only did one year of school in Germany as a lab technician n u dare say he has an agenda!?Raiya agenda has bin chaos killings n impoverishing pple n to me that's not an agenda.Raila schooling should b probed too.This time I hope kalonzo is well serious,there was a mou which was signed btw them so raiya should honor it.Kalonzo Kamba nation is already divided n trust me jubilee has 45% of yr votes n u can see u have lost big chunk of mpigs too so play yr games light juu the lord of poverty won't achia youu.

@Mkenya halisi. I agree with you.I think that if Kalonzo is going to allow himself to be treated as a second fiddle fool and idiot by Raila. Now for the last 4 years.Then he does not deserve to lead the Kamba Nation.He is too intellectually weak.The Kamba Nation should decamp to Jubilee.Where they will be a part and parcel of the Jubilee Government.Jubilee Politics is all about Peace and Development.So I know that Kamba People will be attracted to the Jubilee Government development agenda;all over the country and within Kamba Land.

KIM. I can tell you now that you're calling Raila an idiot out of your hatree of him.Anway: Why did'my Kibaki support Uhuru for President instead of His VP Kalonzo? Ama ni kwa ajili Nyani Haoni Mundu-le?

Guest1.I just don't believe Raila is good for the country.Period.and it is not about tribe. Raila has been responsible for a lot of the killings and chaos in the country.He sets the fires and other people end up putting out the fires after him.Kenyans should not vote for him.Even the Luo People deserve a better Leader than Raila. Even Luo's should consider being a part and parcel of the Jubilee Government come the election.

Kenyans this is not new, I grew up with Kamba's and worked with them in Industrial area in Indians factories.NEVER trust a kamba it is in their DNA historically,I feel bad for RAO who has struggled for second and third liberation in kenya.RAO has suffered a lot under president Moi torture for many years.Kalonzo is a spoiler and RAO would have learnt for the first time when he sneaked and joined kibaki and this is the problem with RAO he never learn.Don't be surprised Kalonzo will end up in jubilee.

I agree with you a MILLION times.

You are right. There is something unique about Kamba's culture. Almost every household in Mt Kenya region and Central Rift has been affected by a bad omen that they associate with a kamuti that they claim to have an origin from Ukambani., especially Kitui region. Occasionally, we read stories in reputable Newspapers such as Daily Nation of mysterious and unnatural occurrences taking place in Kamba land where it is reported that Kenya Police had been deployed to protect civilians from stone throwing forces that cannot be seen with naked eyes.

@Dr Koni Hanene, you are a dr and still believe in such primitive stuff like kamuti. Kweli you can remove the man out of the ghetto but you can not remove the ghetto out of the man. This is not the first time you have written about uchawi/kamuti etc. Bad & good things will happen you as long as you are alive but if you believe in witchcraft you will always say hi ni uchawi

@Oku, Raila tried to overthrow President Moi in the 1982 attempted coup. So, did you and other Luos expect Moi to thank Raila by kissing his butt? The two worst cases of post-independence violence and atrocious bloodshed in 1982 and 2007/08 were caused by this power thirsty monster Raila. He and his blind followers falsely claim he led second and third liberations. But the real fact is that he led the two worst atrocities in independent Kenya. Furthermore, were it not for his misguided power hungry actions to lead coup in 1982, Moi would probably not have become the ruthless dictator he turned into -- and there would have been no second and third liberations.

@Hon Kenjuu.You are right.Raila is a Narcissist.It is all about trying to achieve Power for himself.He lacks an understanding/concern of the atrocious effects of his own actions.And when he causes chaos.He usually will blame other people.For him, the violence and bloodshed that he has caused is never his fault.It is always the fault of other people.His Blind followers also never hold him accountable for his actions.Kenyans should never allow him to be president. Raila and His blind followers do not know anything about Establishment Politics.Establishment Politics is all about Peace,Law and Order, Stability, Inclusivity/Social Harmony and Development.These are qualities that Raila and His Blind Followers just don't posses.

ALL YOUR COMMENTS ARE BAD MANURE, MEANT TO DISRUPT NASA. REST ASSURED KALONZO WILL NOT BE THE FLAG BEARER FOR NASA AND HE IS NOT LEAVING NASA EITHER. SO YOU AND YOUR CORRUPT JUBILEE KEEP ON WISHING AND GET READY TO GO HOME COME AUGUST

Jon kenju very good thinking.U spoke like 10 kikuyu men.He deserved it n probably moi could have deleted him completely juu watu hawangekufa in 2007/8 n we won't b having problems in our economy every time we have elections coz of the threats he coughs but trust me round hii wr very ready if he starts any nyokonyoko?We won't watch our biz n country burning.You can take that to the bank.If they won't to burn kisumu we have no issues juu huko ni kwao.

Kim I think you need to look thoroughly kenyan politics.I cannot believe you are saying that UHURUTO are practicing peace,Law and order,stability,inclusivity/social Harmony .My brother you are forgetting that kenya is ranked as one of the most corrupt and tribalistic Nation in the world.Actually it is the third most corrupt Nation in the whole world and that's why you see us going backwards.check this out DP Ruto acquires the Iconic 680 hotel for sh 3 Billions and you say this is stability,inclusivity and social harmony.Yo mean to tell that RUTO has saved that kind of money for a period of 4 years People like waiguru still around.Stealing money left and right and that's what you call development.Not paying Doctors and Academics is what you call developments,promoting tribalism,nepotism and every day corruption looting money through dubious means is development

@OKL.You have to remember that it was not very long ago that Raila called for politics of 41-1.This is the type of Politics that is capable of destroying Kenya.Once one group of people is targetted. The society very easily degenerates to fighting and counter fighting.This is why I say, UHURUTO have been able to maintain peace in Kenya.By calling for peace and fighting back against the politics of chaos and lawlessness.As far as Development is concerned, the development record of Jubilee speaks for itself.Yes corruption is a problem,however even on that score,I do not believe that the Nasa brigade would do a better Job than Jubilee.Just take a look at all the Corruption we have seen in opposition led counties, that the opposition leaders have said nothing about.It follows logic that if the opposition were in Power they would only loot even more.I say stick with Jubilee.We have more of a chance for peace and development with them.