Miguna Miguna Blocked from Boarding a Flight to Nairobi 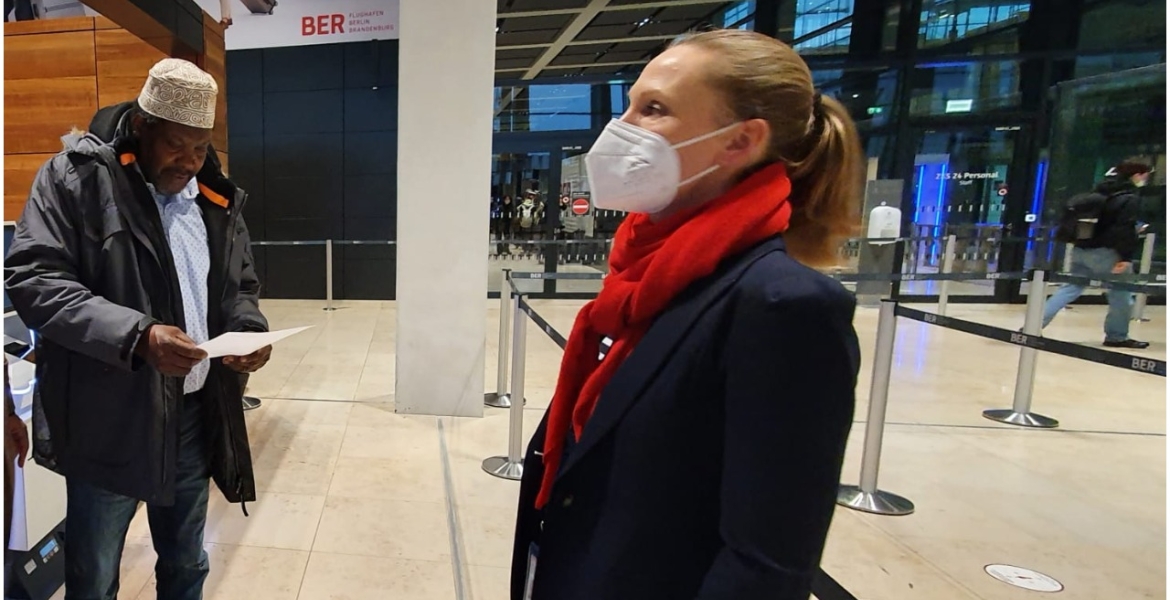 Kenyan-Canadian lawyer Miguna Miguna’s bid to return to Kenya has hit a snag after he was barred from boarding a Nairobi-bound flight.

Through Twitter on Monday, Miguna said Air France officials at the Berlin Brandenburg Airport in Germany said they cannot fly him to Kenya after the government allegedly issued a fresh red alert.

"This is to inform Kenyans and the world that @airfrance officials at the check-in counter at the Berlin Brandenburg Airport have just informed me that the Government of Kenya sent them a "red alert" this morning that they cannot fly me to Nairobi. I'm waiting for a copy," Miguna wrote on Twitter.

"They have refused to state "Red Alert." But they have indicated that it is obvious and they empathize with me but that there is nothing they can do. Let our legal team get to work. Thanks, everyone for the support. Aluta Continua," he added.

Miguna had on Friday said he would proceed with the trip despite the court declining to lift the red alerts prohibiting Lufthansa and Air France from carrying him to Nairobi.

“If I am blocked again, the matter will return to court,” Miguna said.

Miguna was deported to Canada in February 2018 after taking part in the swearing-in of ODM leader Raila as the 'People's President'. The government has previously ignored courts directing it to allow Miguna back to the country.

Why is this government so afraid of one man? Shame on you Uhuru and Raila!

Wait for next govt or change names and get a new passport. Wisdom is key. Not brawn. Doing same thing same results again.

Plastic surgery can do miracles

I thought willy Mutunga and Nelson Havi were to accompany him and the journey streamed live. There are some people who are good academically but lack wisdom

The two other clown lawyers talk too much! They incited stupid Miguna well knowing he won’t make it to Kenya! Would you trust Havi or Mutunga? They are more useless the Miguna njuguna!

@Ciro Mutunga and Havi would not have influenced the immigration office at JKA even if he landed. I don't know why they were shouting they know the law . However they did not ask Miguna to go to Kenya . He said he was returning and that is when they started to say they will go and accompany him . what about if they were refused visss by either canada or germany . Let them tell us how they would have made it happen maybe using firearms on arrival but that is not allowed on flight

They all got a big mouth and talk too much without actions!

Please someone educate me on why the KENYAN government is scared of Miguna.
He's not a terrorist for all I know.

No one is scared of the coward Miguna Miguna! He knew this was going to happen to him! His mouth is the terrorist in him! He needs to tame that dirty mouth. Glad someone is teaching him a huge lesson!

He has publicly said he will organize an uprising against the sitting government of Kenya.

Well this guy keeps announcing to the world he’s traveling back to Kenya. Maybe you should travel low key next time.

Let the drama unfold. MM should just enjoy Paris and forget about proceeding to Jamhuri. Nothing else left to do but to go back to the arctic cold. I empathize with you dude. Just hope to make next regime or if not the next after that. Wish you all the best in your quest for what is rightfully your right to go back to your motherland.

His young girls need him in the attic cold! They are all crying under the bed watching a foolish father mock himself! Even the next government will not allow Miguna Miguna to enter Kenya! Let him enjoy the white people’s countries of Germany and France! He can try to fly thru Cuba!

These two handshake flower girls are trying to create an issue out of a non-issue, no wonder the tag banana republic and being a laughing stock this part of the continent. Breaking laws and bending the constitution at anytime for their convenience has become the order of the day.

Don’t get emotional about a thug! Which laws were broken? Would allow a mortar mouth to enter your house? We do my t need drama in Kenya under the disguise of the law! These lawyers think they are above the law! It’s about time we start fighting them back!

He might be good in books but low in wisdom. Try your luck in the coming government of Ruto. You will make it.

Uhuru and Raila are behaving like spoilt brats.So what the guy likes to run his mouth but denying him the right to go home when he is not a terrorist threat while the likes of Babu Owino , Waiguru and even Ruto who have been accused of much worse are free to roam speaks of injustice.Uhuru was even called a monkey by some Chinese dude and Raila is pretending he is hurt when he knows the guy is no threat to him politically.Do these two know that Kenya will survive without either them or their corrupt offspring at the helm.Retire and take the thug Ruto with you Kenyan will survive

Miguna persona non grata but RAILA Who was sworn is being supported to be the next Kenya president. Maybe miguna has to wait a bit longer and snd find out if raila will win then all doors will be open . for now he can fly to uganda or TZ and go by road he can cross. In Namanga their is no wall no gate he can just walk out otherwise he will keep wssting money via berlin or europe as a whole

TRUST RAILA AT YOUR OWN PERIL. MAN RISKS HIS LIFE TO SWEAR YOU IN, UKO NDANI NA UNAFUNGIA WENGINE NJE PERMANENTLY. THIS IS WHY I WILL VOTE FOR ANYONE ELSE OTHER THAN RAILA AMOLO ODINGA. WAKO NA UPUZI MWIMGI SANA WAKIWA NA UHURU. A DECADE OR TWO DOWN THE LINE WHEN A MAJORITY OF KENYANS WILL BE DUAL CITIZENS MIGUNA WILL BE THE HERO YOUR CHILDREN READ IN THEIR HISTORY BOOKS. SASA I DON'T EVEN LIKE MIGUNA, BUT WHY WOULD YOU MAKE SUCH A SCUMBAG'S NAME BE READ SYNONYMOUSLY ALONGSIDE YOURS IN YOUR SO CALLED LEGACY. MUTAZEEKA VIBAYA SANA, DENYING CITIZENS THEIR BIRTH RIGHTS, WHO THE HELL DO YOU THINK YOU ARE?