Meet Alex and Alan, Kenyan Identical Twins Working as Pilots for the Same US Airline 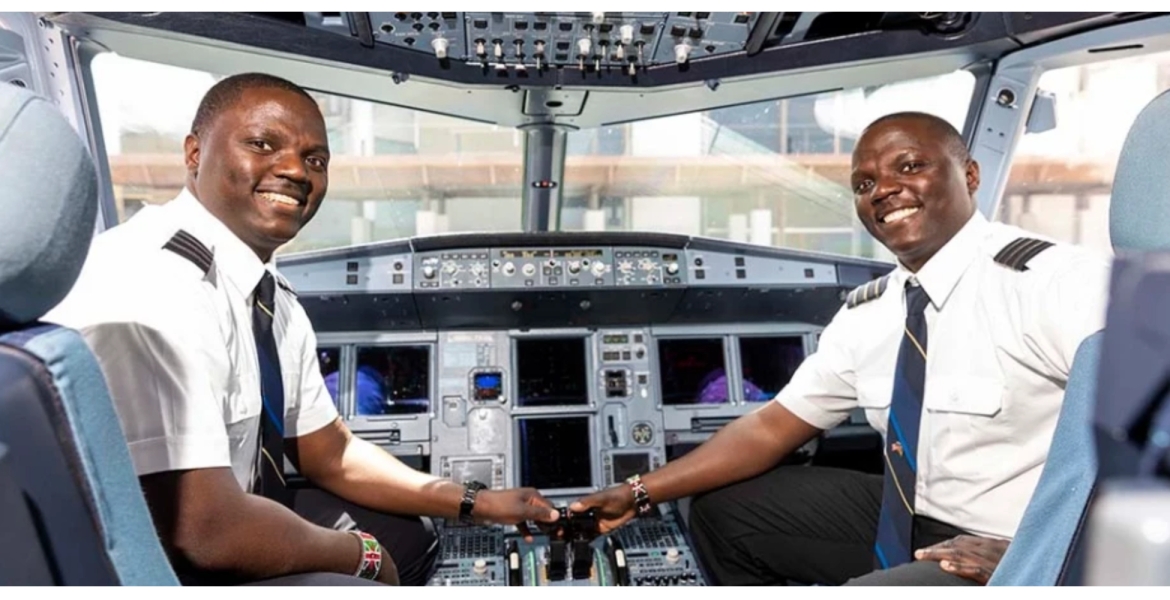 On Monday, the airline said Alan was hired shortly after finishing his simulator training and will be based in San Francisco, while his brother Alex will be flying out of Los Angeles.

The two are believed to be the first set of identical twin pilots to work for the airline which is headquartered in SeaTac, Washington.

Alan and Alex, who grew up in Kenya before relocating to California at the age of 13, say their love for aviation goes back to when they were three years old.

As such, the two brothers had frequent plane-spotting excursions with their dad every Sunday after church and also accompanied their mother on every business trip. Alan also recounted a childhood memory of their mom buying them a Microsoft Flight Simulator to help support their passion.

“After I started playing with the program, that was it. I knew I wanted to do that [fly] for a job,” said Alan.

The brothers say their dream is to fly together as they have been unable to accomplish this due to the complexity of operations in the field.

“We’ve never flown together professionally because we’ve always been on different aircraft. The goal is to have one of us upgrade to captain and be operating the same aircraft so we can fly together,” said Alex, who is a first officer.

When they are finally able to fly with each other, they want their mom whom they credit as instrumental in fostering their love of aviation, to be in the cabin. The mother has never flown with any of her sons.

“We have to get her on one of our flights,” said Alex.

Alaska Airlines is the sixth-largest airline in North America when measured by fleet size, scheduled passengers carried, and the number of destinations served.

Is this comment an example of that Western "positivity" you are talking about?

So why put down Mūmbi's children?

What the luos going to do to other Kenyans once we vote for Raila to be the next president? Give me a damn break! @Na arrogance speaks volumes. I just changed my mind about voting for Raila.

And your negative comments (thumbs down) about the Kikuyus here is part of the many other reasons the Kikuyus are hesitant to vote for RAO because of your blind arrogance and childishness. Kenya is a Nation of many tribes and as a matter of fact Kikuyus are the most educated and wealthy in Kenya. We also don't take to the streets to throw stones every chance we get. We also do not sleep with corpses after a relative dies.

Did you have to cut down on the kikuyus while we are working so hard to have Raila scale the Mountain @Na? Shenzi wewe.

Hallelujah, soar high with eagles brothers and stay hydrated. It is too hot here in Oklahoma.

Hence my relocation to a somewhat cooler mountain climate. Can't ever leave the mountains completely.

There is something silly about the luos that I do not like - empty pride while demeaning others. Kujipamba kama mashetani. You will defecate on our heads once the kikuyus make Raila president.

Too bad they don't know how to jipanga with a plot, some chickens and a couple of cows and a few mabati rentals. They could be making 418000 phantom shillings a month in a few years. Compare that with making $78k to over $200k annually. This airline pilot gig only lasts till age 65🤔. Guys don't listen to the inevitable naysayers, congratulations 👏

Luo names get upgraded to those of white people based on the level of achievement. Oh, they have arrived and no other Kenyan has ever been there. Ask @Na what is the next level to climb.

Congrats and well done I am sure it will be a great moment the brothers fly together and have their family flying onboard.

Congratulations, twin brothers. You make Kenyans proud. Keep up the good job. You are extraordinary.

Keep up the good job!