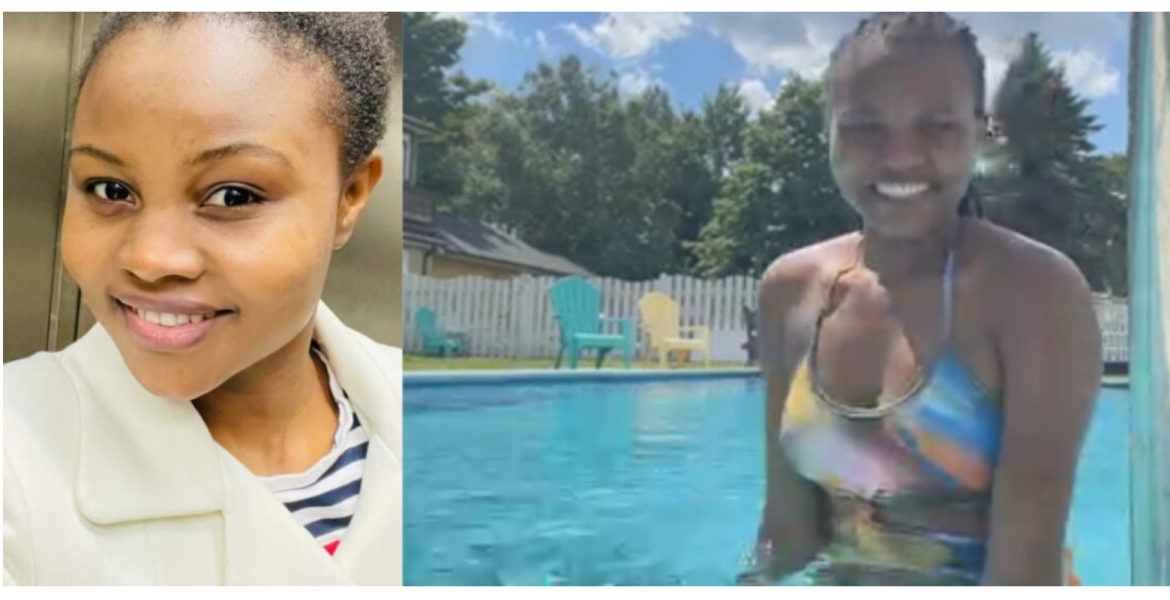 A Canada-based Kenyan nurse identified as Hellen Wendy supposedly drowned in a swimming pool while live on Facebook.

In the shocking incident that happened on Thursday, the lady was enjoying her off hours in the swimming pool as her audience watched on Facebook.

At the beginning of the live video, Wendy informed her followers that she was just from work and decided to spend her afternoon in the pool.

“It’s two o’clock here…nimetoka job, niko pool, just having some fun…maji ni baridi…” Wendy, who appears to be alone at the pool, says.

But 10 minutes into the video, she is heard screaming for help before she goes silent.

Her live video continues running for over three hours before a man emerges and is heard talking to a second person in the background before the video ends.

“It looks like a real person…,” the second man is heard saying.

Wendy's bio on Facebook indicates she studied nursing at Toronto Metropolitan University and lives in Ontario.

This generation ...They'll do anything for strangers then an employer or coworker discovers the posts and blackmails them. That's why monkeypox is spreading so fast. She perished for likes.

But know that MonkeyPox Originates with Male Homosexuals; those Upside down Honchos.

Well, it doesn’t appear that there was an alligator 🐊 in the pool cause she didn’t get swallowed! It wasn’t a heart attack either cause she had time to scream!

It must have been hypothermia, she complained about cold water, her muscles probably locked up and she went down quickly!

Pole kwa waliofiwa! Hope she didn’t get distracted filming, overdid the swimming beyond her level to impress her audience resulting to drowning.

Dangers of social media are real!

I can only imagine the pain and agony her family members and friends will go through dealing with the death of a loved one overseas.

Some of the Comments you Guys make here Make me Want to Laugh (instead of Mourn😭 this Lady). It's like You be Drinking something.

Laakini, so in her audience, no one thought of pinging Ontario police or any of that. These numbers are always online! I know because I have once called London cops while in Chicago, by googling their number online...to have them check on what turned out to be a Nigerian scam. And they checked too!
If I may say. I have always been better than most in intelligence.

I thought the same.....to make it sad...3 plus full hrs. But again it depends on which "friends" or strangers who were watching. Maybe it was someone in Kenya or else where......who didn't know her exact location. Toronto is huge.
My other quiz is since most pools have surveillance cameras.recording 24/7...how come security or concierge didn't notice any of this? Sad. RIP.

I thought the same.....to make it sad...3 plus full hrs. But again it depends on which "friends" or strangers who were watching. Maybe it was someone in Kenya or else where......who didn't know her exact location. Toronto is huge.
My other quiz is since most pools have surveillance cameras.recording 24/7...how come security or concierge didn't notice any of this? Sad. RIP.

Very sad, kumpoteza a young lady like her. May her soul rest in peace. My condolences to her family.

Having done swimming classes then told I'm too muscular to swim, fat floats better. Is that a black issue thing or just personal?. I don't play in waters and I am fast in showering too. Someone explain. Thanks.
RIP to the departed. Young folk impress those that matter: mom and dad and God.

Black men have heavy bones and sink quicker. I recall one black muscular gent who tried so hard to learn and after 3 months, there was only one style he could use to float, if he was ever in that situation.

Thanks Seneca. I'm happy to be out of water all my life. Life jacket okay for safety

This is a lesson we should learn. There has been several cases of you Kenyans drowning in pools and lakes. A simple swimminglesson can prevent you from drowning in a poool. You may not be a pro swimmer but you atleat you can learn a few techniques to stay afloat. Anyway, yakimwagika hayazoleki. May God rest her soul

You are one of the few well informed people here. She clearly couldn't swim in the deep end! She freaked out when she found herself drifting deeper. I wish there was a lifeguard on duty. May she rest in peace.

How can one video take while in the weater? or did she have laptop anexed at some place ? very strange . may she rest in eternal peace

MsonoBari, what does monkeypox and homosexuality have to do with the drowning of a nurse, you are a pathetic demented small, closeted homosexual. Shame on you, with an IQ in the single digit can't comprehend and contribute like a sane human being go back to Kayole and eat matumbo

MsonoBari, what does monkeypox and homosexuality have to do with the drowning of a nurse. You are a small, demented juvenile closeted homosexual, not sure your fantasy is welcome here.