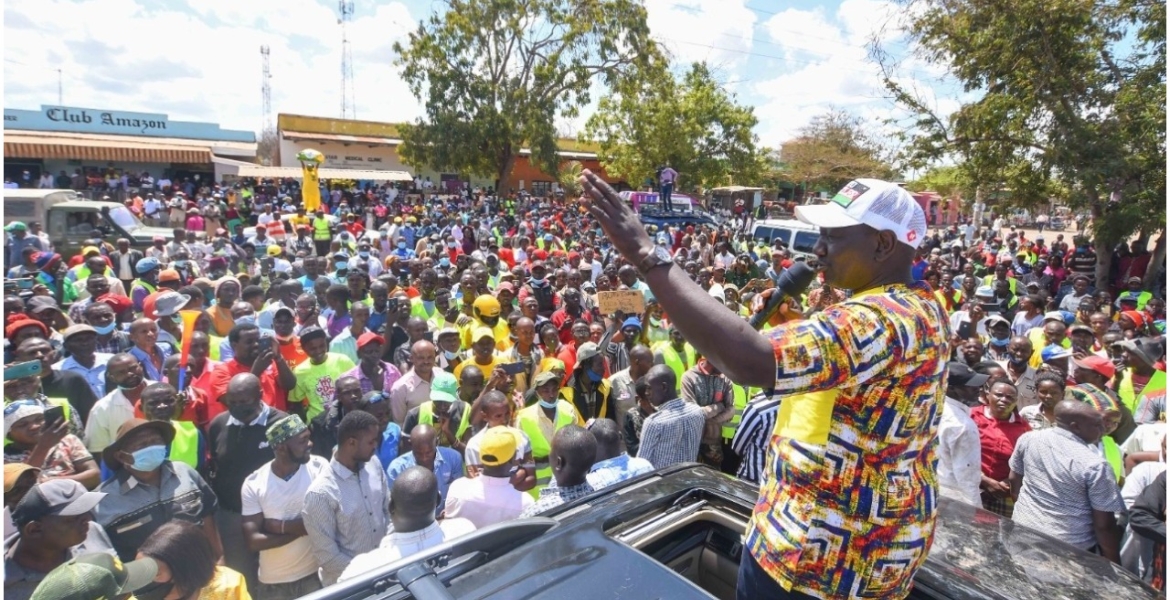 Deputy President William Ruto has pledged to support and empower commercial sex workers in the country.

Ruto announced the move on Monday during his tour of Machakos County, where he drummed up support for his 2022 presidential bid.

At a stopover in Mtito Andei, the deputy president asked a group of sex workers to organize themselves into a Sacco and promised to boost them with Sh1 million capital.

Ruto said the money would enable them to start legit businesses, transform their lives and support their families.

The sex workers had sent an appeal to Ruto to provide them with empowerment funds that would see them switch their careers and pursue better jobs.

He promised to follow up on the money to ensure the sex workers realize their dreams in the new ventures.

Ruto told residents of Mtito Andei that his Bottom-Up Economic Development plan will deliver Kenyans from the yoke of selfish political leaders. Under the model, he said, the government’s focus will be the needs of the ordinary people as opposed to those of leaders.

“Kenya cannot be built by stipends. We need jobs and business opportunities that will make them economically independent. It is only by changing the economy that we will be able to employ more youth, and empower small businesses,” Ruto said.

Wow,wow, where are your christian values DP Ruto? Besides that, I thought that prostitution is illegal in Kenya...I bet those men of the cloth you dole your largess on them will be silent or give you tacit support on this issue.
How about encouraging proven businesses to expand by employing prostitutes who want to switch.That way your millions will help expand genuine business.
Anyway, I have always wondered, is sex really work?Are men taking advantage of desperate women?How about the few who willingly engage in this sex trade?Who is exploiting who?Or is there exploitation between what is deemed fair commerce,albeit illegal? So many questions,few answers... Let's hear from the Moral Police.

@Maxiley, Ruto is simply putting his money where his mouth is...in the brothels. No surprise there.

Another mundu wa nyumba not reading the article fully jumping into conclusions. Kwani what’s the purpose of commenting while not being partisan?

Maxiley, these women are are your sisters. They need attention like the rest of us. Most of them do what they do for survival. Am glad someone has seen their plight and wants to help them . It’s indeed Christian to do so. Even Jesus did it. Not giving a million but forgiving and showing humanity. Read Romans 8:1 John8:10-11

@ Asista, Iam well aware of who they are,and I emphathize with their situation.But prostitution is a crime in Kenya.Do you know that? Just like stealing is a crime. Obviously you have not paid attention to what I wrote. I said Ruto could have them employed by proven companies that want to expand,and he sudsidizes their pay.
You also left a very important factor in the equation -MEN.You ask these prostitutes if they would be happy if men did not patronize them.The men are your brothers, husbands,uncles,and boyfriends. What do you have to say to them?
Iam also mindful that,the matter of prostitution in any society is a very complicated one.I do not believe that their is any society that has totally gotten ride of it.Because some argue that their are pros and cons on both sides.Not only that. Some also argue that sugar dadies and sugar babies is prostitution.Some even go as far as saying that marriage is prostitution.So where do we draw the line on who to help? The street prostitutes?
True as you said, most prostitutes do what they do for survival.But they are not the only ones that need money for survival? Obviously we cannot encourage members of our society to commit crimes for survival.These women are breaking the law by selling sex.And of course the Johns are breaking the law for buying sex.
Now prostitution being illegal,thus with unregistered participants, how will Ruto's plan determine the bonifide prostitutes for the funding? How about those that will come after...
We need to confront prostitution on legal,and moral grounds.Particularly by shaming the Johns,and jailing them.Then once they are all jailed,and ashamed,then Ruto's plan can be put into effect to replaced income lost from the Johns.

Read between the lines @ Max.

Quote, “Ruto said the money would enable them to start legit businesses, transform their lives and support their families”.

The above statement doesn’t means he condones commercial sex. Note that Kenyan women don’t choose commercial sex as their primary & most desired career; they are miserably and desperately choosing to do so for survival due to lack of jobs in Kenya. I am in Kenya now & countable companies are hiring including hospitals! You MUST know someone or Pay up to get hired even to be a janitor! So, don’t judge, have some empathy & compassion for them.

@I hear your GG.But as much as I emphathize,I cannot forget or ignore the fact that Prostitution is illegal in Kenya.Some may argue that it is a victimless if both parties consent.Non the less its illegal.Right?
Ruto is a politician.He will send sound bites that are pleasant to the ears.How many promises to politicians make that the never fulfill.This promise is purely to garner points.If he really wanted to help this prostitutes,he could have done it long time ago.He does not have to wait till he becomes the president.
By the way, why you emphathize with the prostitutes, what is your take on the Johns?Are they helping the prostitutes...if so should they be encouraged? What say you.

Prostitution is not illegal in Kenya, umekuwa wapi. They are now called commecial sex workers!
Read the article Ruto said he will help them start a business. WAJIPANGE KWA SACCO. At least he wants to help. To be honest, Ilove his ideas... everyone must hustle, sio ukae ungojee pesa ya MAXILEY kutoka majuu.. kwani ni manaa.
Even the Israelites had to comply to get mana.

I always read and regard your comments highly, if that’s a word, but I disagree with you on this one. You didn’t quite read the article in completion. I quote “ Ruto said the money would enable them to start legit businesses, transform their lives and support their families.” Seems that flew over you. Literally he meant to empower them to start legit and legal means of supporting their families. That doesn’t mean he’s trying to legitimize what these women do. I am sure none of the other leaders thought of DP’s idea and they will come sprawling out negatively on his ideas. Anyway let the better man win eventually. My two cents as well.

Prostitution is illegal in Kenya. The way I look at it is this; If agoup of petty thieves( law breakers) gathered like these prostitutes did,according to your reasoning, Ruto should avail them the same opportunity-Right?Give them money for startup businesses.May be they should come out.They need help too to survive.

@ Ezzy,I guess on this one I flopped. Anyway, the problem I have with Ruto's proposal,morals,and ethics aside is that,it only addresses one side.As you know prostitution usually involves two participants. So long as the Johns side is not tackled, Ruto is not making adent.Those that start legal business with his support will be replaced by others to safisfy Johns' sexual drives.What say you?

@Maxiley while I don't much care for Ruto, I believe he said he would contribute 1 million shillings to a sacco the sex workers start in order that they launch legitimate businesses. If we are are honest, we know that sex work, though illegal, will continue because sex will always be in demand. Kenya can't lock up every prostitute so I suppose the next best thing is to help them out of this dangerous job. My only quibble is the money. If he is a dollar millionaire in multiples of 100, then giving out less than $10k is like me giving $20. I'm sure he knows of verses in the book he professes to follow that address this.

@ Mundumugo,you go my point.And yes we know prostitution will continue even if laws are toughened.And as I commented elsewhere on this topic, rescuing the current crop of prostitutes will only give room to new ones.And who will fund of rescue them?In line with what you said-sex will always be in demand,some how.But also note that the sex that is illegal is the one where there is commercial transaction-something of value mainly cash for sex.Other sexual exchanges are shrouded in customs,traditions,and laws where sex is indirectly commercialized.But why do men pay for sex?Worse get in trouble for it.We see that all the time.
I conclude with the words of wisdom from one of the great minds,Arbert Einstein; A clever person solves a problem,a wise person avoids it.Women should learn to avoid prostitution.Dont ask me how Iam not that wise.What say you?

The women at the well deserve decent life. Women representatives napping on the chamber

Now, this is the same guy who goes around dishing out monies to Church kitties. There you have it. Hopefully, folks can see the decency in the likes of Mdvd, Kibwana vs the disgrace brought about by some of these 'leaders', and vote carefully.

If this is the kind of reasoning he's been bringing to the table, then it's easy to understand now why the Pres. had to give up on him.

“Kenya cannot be built by stipends. We need jobs and business opportunities that will make them economically independent. It is only by changing the economy that we will be able to employ more youth, and empower small businesses,” Ruto said.

At a stopover in Mtito Andei, the deputy president asked a group of sex workers to organize themselves into a Sacco and promised to boost them with Sh1 million capital.

Is the Ksh 1 million a loan or a stipend? How many are they? Lets say 50...each gets Ksh 20,000. What businesses are they starting? Any advice or support to these ladies on how to invest?

This guy is a joke. I dont even think he understands what "Bottom up economic model" is!

Seems like the DP has some good intentions. It looks like he is albeit trying to fight the world’s oldest profession. However we’ll intended his approach is some of the scarlet women may be irredeemable from the vice of prostitution given the high rates of drug abuse and debauchery. Some might transform their lives for the better and in the end they may vote for DP. The DP merely made a promise and the sex workers may be or not able to form a SACO depending on United and scrupulous they will be regarding the matter in question.

That is a really bottom up with these workers..pun intended?

" A people who elect corrupt politicians, impostors, thieves, and traitors are not victims …But accomplices."