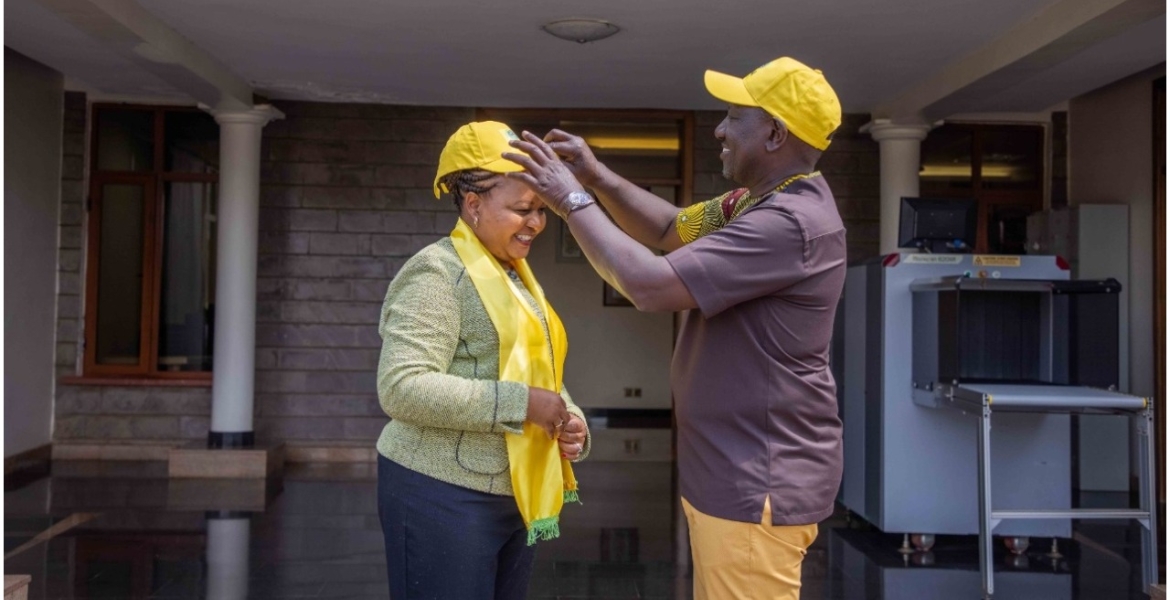 Ruto welcomed Waiguru to the ‘hustler movement’ following a meeting at his State residence in Karen, Nairobi on Tuesday.

Waiguru, who is keen to defend her seat in the next year’s election, was accompanied to Karen by more than 20 Kirinyaga Members of the County Assembly.

She said her decision to decamp to UDA was informed by the political atmosphere in her county, where Ruto enjoys solid support.

She added: “It is only a fool who can continue being in the same political path with the kind of pressure that I have been facing. Never imagine as a leader that you are the one who tells the people. The people are the ones who tell you (where to go). They decide who they are going to elect very early in advance. You cannot dictate to them.”

On his part, Ruto lauded Governor Waiguru for the difficult but bold decision, saying it will “shape the future of our country.”

He noted that the country will be transformed when leaders work together, adding that UDA is keen on having more women in leadership.

“We do not have a luxury of hate and division. We need everyone on board to confront our challenges. We will ensure that there is a conducive environment for women to seek leadership in our country,” he argued.

“There is space to accommodate everyone in UDA. Let us embrace competition because it brings the best in us.”

Ruto and Waiguru do not qualify to manage a local kiosk! Ruto shouldn’t be allow to be the next president even if he wins with a land slide!

You cant give your child to a wolf! Ruto is a hyena that will devour Kenya! Just look at this ugly looking shithead of a woman shameless joining a know thief and a murderer! Every body in uda has a checkered past! They are criminals!

Is this how low politics have sunk in Kenya? These two animals have stolen enough! And the only reason they are joining hands is purely to steal some more! The people of Kirinyaga are not the sharpest people in Kenya if they told Waiguru to join the UDA party of thieves! This is doomed to fail big times!

You got it right @Imara, Chama Cha Matapeli sounds appropriate.
It should also be noted that Waiguru defected for political survival. Having been rigged in by Ruto she knows all too well that being becoming the Kirinyaga governor again is next to impossible.

Waiguru is a cooked goose, whether with Ruto or with any other party! She is just lying that people told her to join uda! I can’t wait for a time Waiguru is in jail for corruption! She is a thief of similar size with Ruto! Kenya can’t be this desperate to have tainted leaders!

Thieves have a comfortable hone in UDA. They are looking forward to win and steal even more. God forbid that that happens. We are in very dangerous territory here.

It is more than dangerous for Kenyans to vote for thieves and murderers! Have Kenyans really lost their mind? I cry the beloved country of Kenya if these are the type of leaders to lead Kenya after 2022.

William Ruto must really hate Uhuru Kenyatta to organize the defection of Waiguru on his birthday.
There were allegations that Anne Waiguru used to be Uhuru Kenyatta girlfriend.

They will all start fighting for greedy positions very soon! UDA will fall apart in less than one year time!

Ruto should not cerebrate much as it might turn out to be in RAO and Karua favor. Ngirici was UDA point person in Kirinyaga from day one and here comes Waiguru and is treated like a prodigal son. The net effect is splitting the vote. If Ruto changes the tactic and choose Waiguru as running mate the likes of Gachagua will not appreciate that much considering he has vigorously campaigned for Ruto hopping to be a DP. In my own thinking whatever Ruto has built from Mt. Kenya will crumble once he name his runningmate.

Everything you see in uda is fake! They are all finding a place to hide their corrupt nature!

Thieves have a home in UDA! They will steal Kenya bind! It is quite sad that Kenyans are cheering thieves in UDA!

Ruto will kill Kenyans on the streets with bowls and poisoned arrows! Kenya can’t afford a Ruto presidency! There is no God in Ruto! He is a demon possessed idiot who is too greedy for power!

In whose HANDs are Kenyans safe after 2022? That is a talk question Kenyans need to ask their brains and ponder! It is a very sad snd dark day in Kenya to see two pronounced cons join hands and the people cheer and clap hands!

Jambazi Mumbi is searching for a minister’s seat since she also knows she will be beaten by thug Wangui In nomination.Mara hii atakosha yote.

It is very strange how the thieves in UDA use the name of God in vain to justify everything that is wrong!

Even Waiguru who can’t account for 7/8 of her ill gotten wealth had to quote James 5:———— as her source of spiritual guidance and strength!

She also quoted some kikuyu saying about, “charity beginning at home ———“! You tend to wonder what charity she is talking about! She even praised Ruto fir being a comrade in corruption, graft and stealing - funny enough those present clapped!

Are Kenyans not really confused about the kind of weird politicians we have today???

"Birds of a feather flock together" MEAMS= People like to spend time with others who are similar to them.

Let her go where her fellow thieves are.Two tribes alone cannot continue to determine elections.Tukutane kwa debe where you will be retired for good.

ODM thugs/murderers and muchawi Raila wives now describe the JEFF St.trader,Mumbi as a thief.The same gangster was a saint for the two years she shared Raila’s penis with them.The same awaits jambazi Uhuru who will dump muuaji Raila in a few months time.Kibet,Jambazi Ruto’s PA should purchase an extra CD briefcase for his boss.

The most lethal combination in State House. HE Dr president and HE Dr Deputy president. Go big or go home!! A booster shot for UDA.

RUTO THE 5tH PRESIDENT OF KENYA COME 2022.WAIT UNTIL JANUARY THE ONES WHO ARE LEFT WILL JOIN UDA N LEAVE THE CRYING BIG BABY ALONE.Dynasties Must Fall Go Home 2022 Waachie wengine