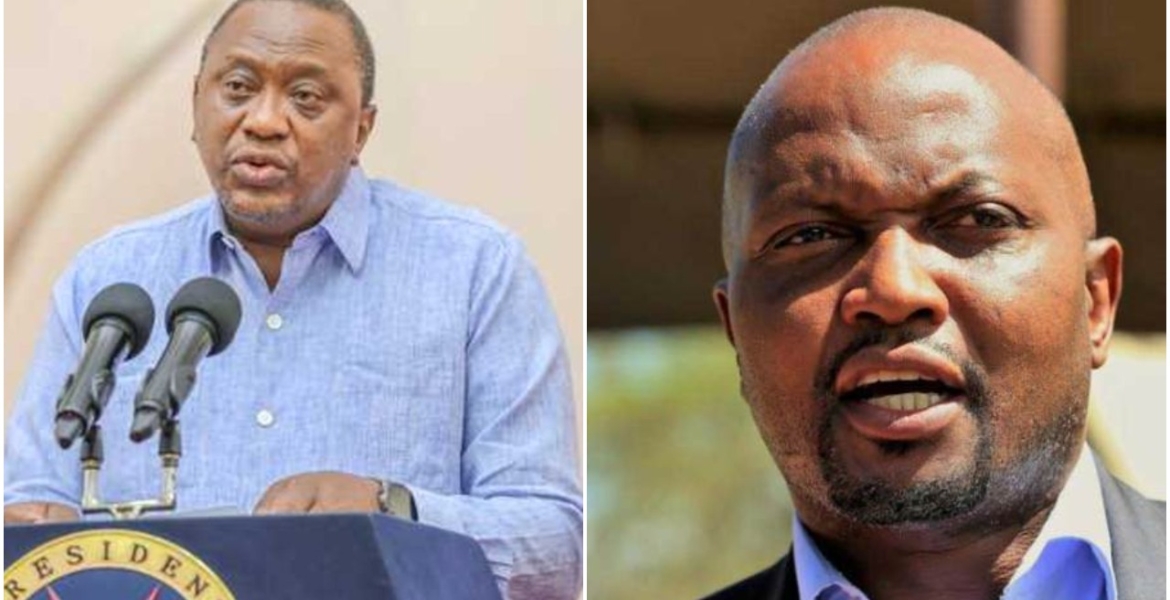 Through Facebook, Kuria accused the president of turning a blind eye to future political leadership of the Mt. Kenya region.

The outspoken MP cited the sacking of former Agriculture Cabinet Secretary Mwangi Kiunjuri, who was once touted as Uhuru’s successor in the region.

“One of the only two Cabinet Ministers Uhuru Kenyatta had the guts to fire throughout his 10 years in power, the self-made Kiunjuri is back to the Laikipia ashes where he rose from,” Kuria writes.

Kuria says the Mt. Kenya region has become an altar where political careers are sacrificed, arguing that several politicians have seen their careers come to an end prematurely. He gives Kiunjuri, former MP Gitobu Imanyara, Narc-Kenya leader Martha Karua and Senior Counsel Paul Muite as some of the examples.

“Gitobu Imanyara has been in and out of hospital bed out of complications arising from Nyayo torture Chambers,” Kuria said.

He adds: “Martha Karua is struggling to raise her head in a crowded crowd. Paul Muite's political career withered like a failed crop before harvest.”

Kuria compared Uhuru’s leadership to that of ODM leader Raila Odinga, saying the latter has never allowed his political lieutenants to fade into oblivion.

“Anyang Nyong’o and James Orengo are still going strong even when Raila Odinga had all the powers he needed to vanquish them into smithereens. They now co-exist in leadership alongside youthful leaders like John Mbadi and Edwin Sifuna,” Kuria says.

Kuria argues that other than Jomo Kenyatta, the only other Mt. Kenya leader who let leaders grow was retired president Mwai Kibaki.

“He [Kibaki] prepared Uhuru Kenyatta for leadership first by appointing him Deputy Prime Minister then Minister for Finance in quick succession,” Kuria states.

Why can’t those miguu burn again so this idiot shuts up.

He is telling the true. Joho is doing the same here in the Coast. Your leg need to burn Ayatollah Komen!!!. What he is saying is what everyone in Mt Kenya says. Uhuru did not want to groom anyone in Mt Kenya area because he was planning to continue being the kingpin of the area if his plan of Raila Odinga suceeding him worked. However, events are now overtaking him and he may end up being the biggest loser in Kenya's history

@Komen Somebody was able to control his pain. Now he is thinking beyond his legs. Hopefully he heals soon enough to continue his parroting.

I beg to disagree with you on this one. Both Orengo and professor Nyong'o had their own party but they quickly realized the only way is to support Raila for them to grow politically. Uhuru was in KANU but he also realized the only way is to support Kibaki and he became president. Guys like Paul Muite had Safina party but he kept on trying presidency by himself instead of quickly joining team uhuru. Same thing happened to Martha Karua. She should have joined team after uhuru after 2013 and right now she would be very strong politically. As for Mwangi Kiunjuri he deviated from from uhuru thinking Ruto will make him his running mate. So all the people you mentioned made their own mistakes you can't blame uhuru. The other problem with people from the mountain is selfishness especially the young upcoming politician.

I like politicians, who made Moses Kuria the spokesperson? Why not simply state that Uhuru has failed "Moses Kuria"? When pocketing the bribes, that's their money; and when EACC goes after them, it's the tribe under attack.

The problem with Kuria and other politician is stupid! They like to blame others while they have done nothing for the voters! What a shame!

This Kuria need to have a more severe burn to shut his damn mouth! What have you done yourself Kuria!? Uhuru can’t be your father and every body else’s!

Kuria has turned out to be a huge whinny like a little mentally sick school girl! The very simple question is, what has this feet fried dude for his constitutes before he can lay the blame on Uhuru! Gati gaka! Useless shithead with some broken damn chicken feet! Hope your hands get burned too so you can be confined to a wheelchair!

Isn’t grooming others the job of MPs? You are one useless most to a point you don’t know your job! What good has come out you after Uhuru wasted time grooming you silly ass? No one you are not running again because you know you will loose! Go sit around with that foolish WSR so both of you can take Kenya to hell! Useless fool!

You sound somewhat intelligent but yet you are the dymmiest MP in the Mount Kenya region! I blame your Gatundu people for voting for a thief! Where is our CDF money? No wonder your feet are getting burned by electric blankets! Maybe Wairuguru was right to laugh at you Kuria!