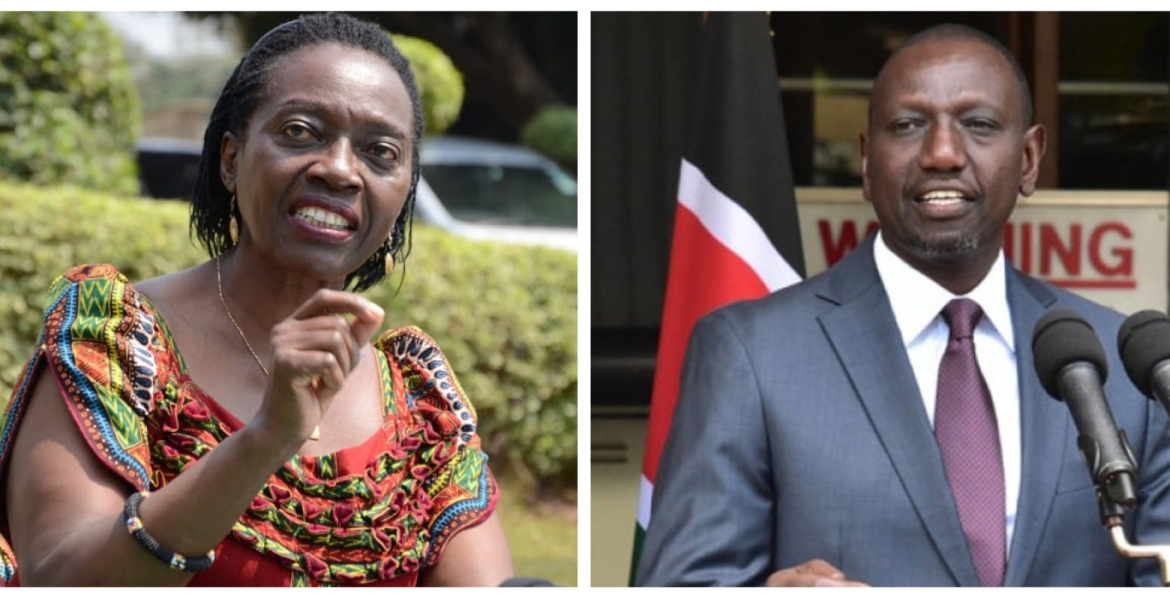 Azimio La Umoja-One Kenya coalition presidential running mate Martha Karua has told off Deputy President William Ruto over claims that his life and those of his family are in danger.

Karua, who spoke on Sunday after a service at Nandi Hills Catholic church, asked Ruto to stop peddling lies about his security, stating that the deputy president has one of the strongest security details in the country.

“You have been insulting your boss for so long while still in government, attending cabinet meetings, receiving dignitaries at the airport, but want to make Kenyans believe you are not safe? Who then is safe? Stop spreading lies because of politics,” Karua posed.

She further urged Ruto to use some of the security officers assigned to him by the government to protect those close to him or file formal complaints with the government instead of causing tension over unsubstantiated claims.

“The current deputy president has a very heavy security detail, and I urge the DP if he is wary of any of his family member’s security to use his security officers to protect them, or ask for more. But stop putting the whole country into a state of panic over allegations that your life is in danger,” Karua added.

Karua spoke hours after President Kenyatta made it clear that he has no intention of harming Ruto, his family or allies.

“There is no need of telling people that I want to kill you. Haven’t you insulted me for three years? Haven’t I been the holder of this office for those three years? I had the power to do so. Now, when I am getting ready to hand over, and have limited powers, do you think I have the time to look for you?” Uhuru posed.

Kenyatta was responding to Ruto, who accused the president of threatening him and his allies in the Kenya Kwanza Alliance.

“As long as you don’t kill my children, I am ready to face you in this election with your project. Mr. President, you shouldn’t be the source of a threat in Kenya. Stop threatening Kenyans. Your work is to ensure that all Kenyans are safe. Stop telling us that we will know that you’re the President,” Ruto stated on Thursday.

Ruto is using reserve psychology to lie to Kenyans that his life is in danger. He still wishes he could have assassinated the president in the last two times he made the attempts ro harm the president. The UDAku group of thieves have a lot if issues. Ruto has killed many times before, he has stolen the poor peoples money, etc. If ruto had just a little power, he could have killed a lot more Kenyans.

Bw. Mbiuki, that is very dangerous propaganda. Please stop it. You don't have any evidence there was ever an attempt on the life of the President of Kenya. Please stop that.

The Kiambaa church murders where Ruto burned women and children to death are still fresh in our minds. .Go ask your mother for evidence you fool. You must be a very stupid kid if your mother never informed you about the ruto massacre in Eldoret. Stop thumbing us in our eyes!

Stick to the subject. Where is the evidence he was assassinating Uhuru?

Stick to the point. W her is the evidence of attempted assassination of the President?

Continue to live in your ignorant cocoon! You are a solly piece of dudu. An idiot for that matter.

Jasper. It could be True that Ruto is using Reserve Psychology (to Preserve himself and his Votes). He could be Employing what I would call: His Fear AgeNDA; Fear PropagaNDA. Which equals to Fear MONGERING for Sympathy Votes; the Nicholas Biwott Syndrome.

Ruto’s plan was to murder and get sympathy votes. He was thwarted and is not very impressed

This is a very sad trend, but unfortunately it could be true.
Isn't this the same government that has killed since independence?
Party changing names,but the same people still in POWER.
So, who killed, Pio,Mboya,JM Kariuki, Muge, Saitoti, ouko, The last of Mau mau warriors, Osando, etc ?
Why has the government kept quite with some inquiries that yielded no results?
How comes the government has never solved non of them?

Ruto has his security that is sourced out of the partisan state capture police commissioner, DCI, the already politically infiltrated army force and to boot with their political state ministers. Can someone tell me what’s it can can go wrong here? I have always thought this woman was among the exceptionally principled women!
She was one of the diehards opposed to bbi and many others but now she is in bed with the makers of the same. They are promising bbi back with Karua as deputy president and a lower cadre of justice minister to make sure all that goes through.
What a mockery?

Says the man who lives in a palace larger than the president’s residence!
If Uhuru wanted to take him out, he would commission a drone attack to wipe out that palace at Karen, or even have one of the loud party goers there poison him!
Ruto, you won’t live in the palace soon, and I think Karua is too modest to live there!
It would fetch the taxpayers a hefty sum if sold in the open market!
Or turned into a museum of corruption!