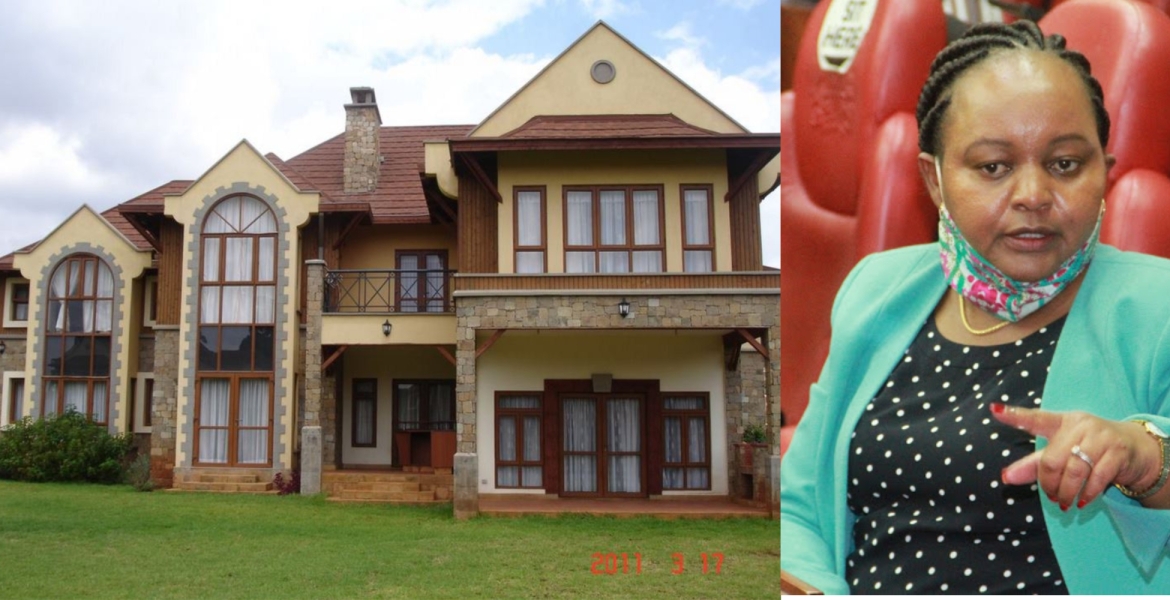 Kirinyaga Governor Anne Waiguru is embroiled in a court battle that could see her lose a Sh200 million mansion in Nairobi’s upmarket estate of Kitisuru.

This comes after lawyer Chris Kabiro moved to court claiming ownership of the multi-million-shilling home, which Waiguru bought at Sh80.6 million from Kihingo Village Limited in September 2015 and paid Sh40.6 million, leaving a balance of Sh40 million that was to be cleared through a mortgage.

Kabiro says at the time Waiguru purchased the house situated at Waridi Gardens, it had been allocated to him and wants the court to order the governor to vacate the property.

Kabiro argues that the house was not available for sale or alienation and wants the court to dismiss a case filed by Waiguru seeking to compel Kihingo to complete the sale transaction.

On its part, Kihingo says completing the transaction would amount to contempt of the court order forbidding the sale of the suit property.

Kabiro adds that Kihingo was aware of the existence of the court order, which was issued in the presence of its advocates after a protracted hearing. He also says the initial court orders restraining the sale of the house were known to Waiguru.

“Ms. Waiguru’s action as filed discloses no reasonable cause of action against Kihingo. Ms Waiguru is a victim of an illegal transaction but a court of law cannot give cover to such victims of illegal transactions,” Kabiro says in cout papers.

“Ms. Waiguru is presumed to have known of the existence of the court order since the ruling from which it emanated was reported in the website www.kenyalaw.org.”

Kabiro was allocated House Number 1D in compensation for legal fees since he was the attorney for the development project in 2007.

“The cause of action upon which the Waiguru case is founded arises out of an illegal transaction not enforceable by a court of law and further proceedings will not only be an exercise in futility but vexatious,” Kabiro adds.

Kihingo, in a counterclaim, says Governor Waiguru is an unlawful tenant and is demanding Sh331 million from her for the stand-by premium and interest accrued. It also wants Waiguru to vacate the house and pay Sh57.6 million for the rent due and owing.

The company claims Waiguru unlawfully took possession of the property in April 2015 and has been in occupation to date.

“This is despite an existing court order barring the sale of the property, to begin with. Ms Waiguru is making reference to an agreement dated September 25, 2015, as justification for her occupation of the suit property. The agreement was void ab initio (from the beginning) given that it would be in contempt of court orders for the suit property to be sold,” Kihingo says.

“Ms Waiguru has no legitimate claim to the property and has in fact been an unlawful and illegal tenant in the suit property.”

The house is currently valued at about Sh200 million and is part of the 55 houses developed by Kihingo on the 37-acre piece of land in Kitisuru.

The case will be heard on November 22nd.

Waiguru bought the house from a legit house builders company- Kihingo Ltd, on a willing seller willing buyer basis. She did not buy a stolen property. While Kabiro claims to have been allocated the house in lieu of his lawyering compensation, Waiguru; a bonafide buyer, came in with Sh40.6Mmillion. Kabiro should bring suit against Kihingo Ltd so they can allocate him another house or pay his lawyer fees. He should stop harassing Waiguru to court looking for political noise.If anybody is in contempt of court here, it is Kihingo Ltd not Waiguru.

Stop robbing kasweetie!!! You can’t have her house and her money at the same time! Wild

Of course she stole the house .They should evict her ASAP she is an embarrassment having stolen from the youth fund and leaving her minions to pay for her mistakes .Her BFF is a nobody now and Kamiti has a plate of cold undercooked ugali garnished with weevils waiting for her.

I do not feel for her. That is our NYS money.

That is exactly what came up in my mind. Our leaders are stealing from us day and night to live in insane luxury at the humble expense of the commoner. That money could have gone to fixing the public health institutions, as well as schools.

If you read these cases, it's an open book on total corruption. Basically, Kihingo sold the mansion to Kabiro, and then to Waiguru. And Kihingo has a counterclaim. And there is a judge who's benefitting from all sides.