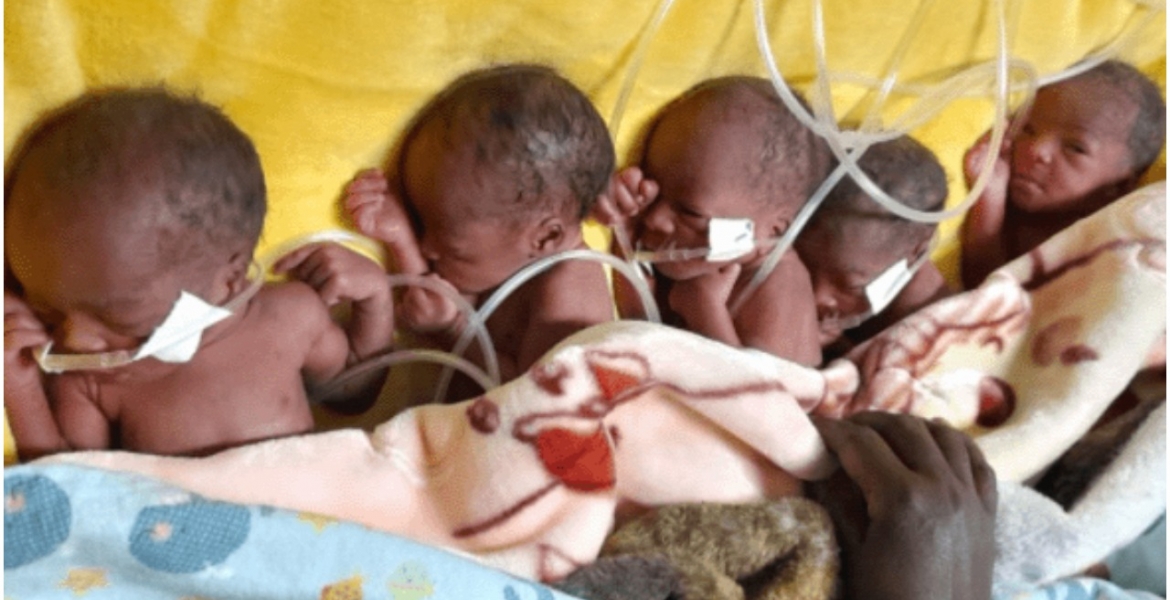 A Kenyan man from Kisii County has appealed for help from well-wishers after his wife gave birth to five babies.

Douglas Nyaoko’s wife delivered the quintuplets at Kisii Teaching and Referral Hospital on Friday through a successful Cesarean Section.

The five babies—four girls and a boy—are currently in the baby incubator in a stable condition as the first-time mother recovers.

Speaking to the media at the healthy facility, Nyaoko said they expecting four babies based on an ultrasound carried out during the antenatal clinics.

The newest father in town says he was shocked when he learned that his spouse gave birth to the five babies.

Nyaoko, who has no formal employment, fears the babies could be a burden to him and has pleaded with well-wishers to assist the family to raise them.

Congrats to the Nyaoko's. Well done mama for carrying the babies to term. Good job helping deliver the babies the staff at Kisii Teaching and Referral Hospital.
This is by no means something easy for any family to encounter having 5 babies at once, no less for an unemployed father.
I hope someone is able to establish a type of Go-Fund-Me for them so we all people of goodwill can chip in and help.

Don't have a job but want to create a baby, good for u sir. What were u expecting to have a baby n feed it grass. Now u have a burden on ur hands n want to unload it on others, way to go idiot n must say ur a good candidate for castration.

@shaka You should crawl in a rat hole and suck your thumb. This man and his family will be just fine. God will provide for them.

Thanks KK. Some fools just talk for the sake of it. Nowhere in the world a family is expected to take care and raise 5 babies alone. Baby goods manufacturers especially baby foods should step forward and take advantage of the situation and advertise their products with the babies. Best wishes and good luck.

Thanks KK. Some fools just talk for the sake of it. Nowhere in the world a family is expected to take care and raise 5 babies alone. Baby goods manufacturers especially baby foods should step forward and take advantage of the situation and advertise their products with the babies. Best wishes and good luck.

You know what I just replied to her message to. She is rude in so many ways god help her soul. You said it good. I think they did a wonderful thing

Your a hateful rude person. How do you know he didn't have a job when she got pregnant. You know she carried the babies 9 months. You know everyone is losing their jobs right now. Instead of congratulating him and her on 5 babies carting them to term and health no you have to be a rude person I would like to call you something else but I'm not rude or mean have a good day god help you

There's power in numbers. Govt should feed and educate this children all the way to high school if the parents cannot afford.

Five babies at once is no mean fete.You definitely deserve some kind of fund to raise those babies.By the way most expectant parents hope to have just one child at a time.They got five at a go.With all that is going on let’s hope people will be generous both with their money and time.Congratulations and good luck to you.

Nonsense. Why should taxpayers money be used to feed children born by jobless people?

I am confident wananchi will step in and help the family.Iam also glad that there are no ramblings about that kind of thing not being normal as was seem some months ago in Kakamega,where they wanted to kill the babies.
Lets open our minds and let science guide as when it conficts with culture,customs and religion.
Thinking of religion,Iam reminded of the old adage “the theology that marries the science of today will be the widow of tomorrow” is likely true. Most major religions that have shown the flexibility to adapt to new knowledge do service to society, while more stubborn faiths will face greater challenges,least of which is dwindling attendance.My two cents.

Wow..some of the comments! The empathy deficiency makes me wonder whether it is keyboard warriorism or just str8 up coldness.. none wrong with scrolling on ..just walk on by if it ain't your soup cup of tea or whatever the F you sipping on that makes you think you are superman (invincible)anyway please share the new mom's or dad's Mpesa/ paybill

I am reading some sadistic comments and i really cry for this country. Be kind, empathic and sympathetic to other people's plight. Having a job doesn't make you intelligent.

KK ur an idiot if u support jobless men bringing kids into this world without a means of taking care of them. Kids r not cats n dogs that u can let wonder to look for food n u idiot KK should be on the castration line with this nigga. Kichwa Kikubwa u should stand up for all the single mothers raising kids on their own as this woman will end up in the same situation

Yes, 5 is a lot but I don't think @shaka is wrong in calling for planning prior to bringing children into the world. I doubt the government or the taxpayers were involved in this couple's bedroom activities. No one makes it alone but you have to live with the choices you make and you have to live within your means. Why keep encouraging irresponsible behavior?

@ Mundumugo, in all fairness,hardly anybody enters into a sexual encounter hoping that in the event of a pregnancy,they would want 5 babies at one pop.What happened here is rare.I dont know how many other kids this couple have,but it is the unexpected that is making the man cry for help. Were is only a one child pregnancy,we would not be reading this story.
Ofcourse, it would be ridiculous to encourage irresponsible behavior.But i dont think this fits that bill.My two cents.

Can I please get their telephone number? No one knows what awaits them tomorrow. Better to do good whenever we can.