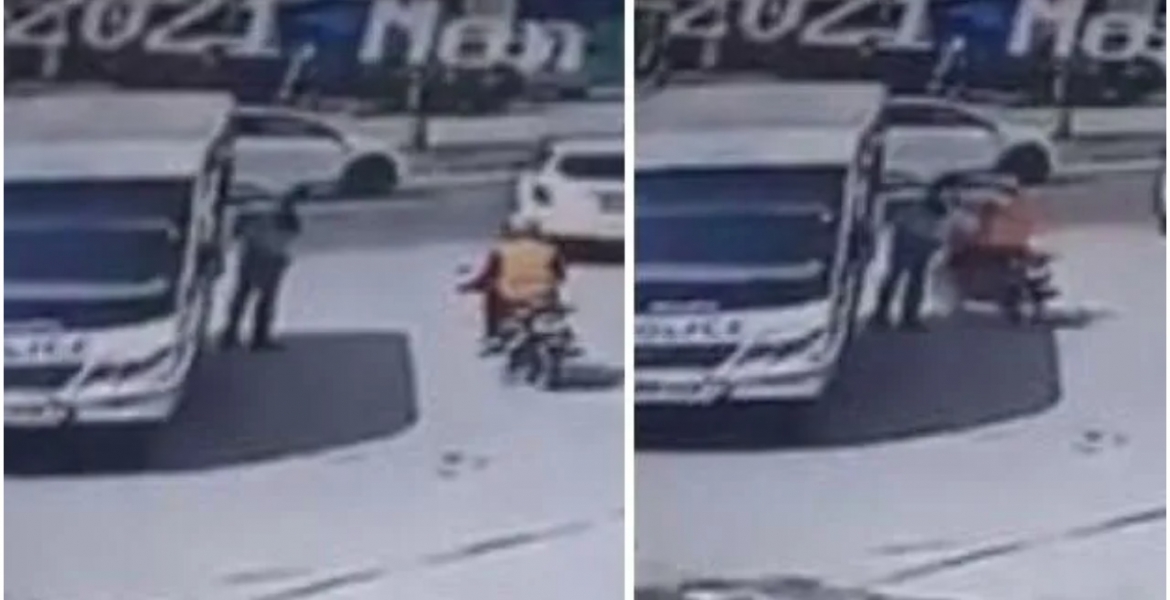 A boda-boda rider was on Monday captured on CCTV snatching a cellphone from a traffic police officer along Kang’undo Road in Nairobi.

The footage that has since gone viral on social media shows the robber carefully calculating his move from a distance before skillfully grabbing the mobile phone and speeding off.

The traffic cop was busy making a phone call while standing next to a police bus oblivious of what was awaiting him.

The motorcyclist arrives and stops for a while perhaps to calculate how he would grab the phone and escape.

He then quickly rides the motorbike towards the unsuspecting officer and uses one hand to grab the phone before taking off.

The officer tries to run after the motorbike but he realizes he cannot match the speed.

He quickly boards another motorcycle and instructs the rider to chase after the thug. It is not clear whether they managed to arrest the suspect.

MuKenya should explain how American makamburus are torching Shauri Moyo,30m.from Misri,Limuru at the moment.He should also explain how the same Americans raided jambazi King’ori’s armory and stole guns at Nyeri,100m. from Misri,Limuru on 08/30/2021.I also want to know from Halisi how the same makamburu wazungu raided Murang’a Hosiptal on 08/31/2021.MuKenya should also explain how two Adulterers were killed in two separate fatal UZILATI incidents in Nakuru,80 miles from Kamirithu,Limuru.Had the guys ejaculated ama walikufa bure?

Lol Too funny. With all the bribes they collect, these traffic police should buy earphones and not expose phone when talking.

The end of the world is near,crooks r now stealing from the police whom for many years have stolen from innocent Kenyans in the name of chai. Who the hell do we run to when there is a crime, the ghost of Patrick Shaw n his Volvo.

Their CIC,Uhuru is also Kenya’s TIC(THIEF IN CHIEF).Muigai presides the sharing of your shs 2b.daily.Compared to his boss,the traffic constable is just an amatuer thug.

The waive of brutality that has been witnessed in Kenya lately could be a responseto mwananchi doing this kind of thing to cops. I believe this is the 3 similar incident I have read.Imagine how many go uncapture on CCTV...