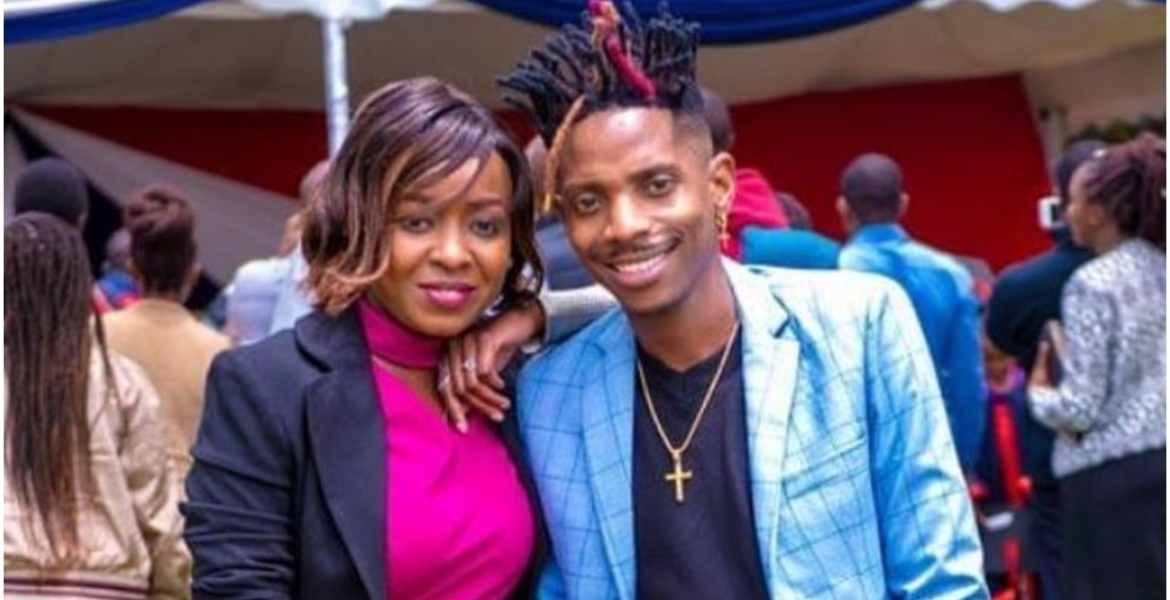 On Monday, Omondi announced through his Instagram account that he is expecting a child with rising musician Miss P.

Omondi, a self-proclaimed president of comedy in Africa, explained that he met Miss P during an event he was hosting, and one thing led to another and she became pregnant.

“I met this beautiful woman five months ago in an event I was hosting. Whatever happened, happened and I promised her I would take every responsibility,” Omondi captioned a photo in which he was holding a pregnant Miss P.

His post attracted hundreds of comments, with some suggesting that Omondi was using the pregnancy news to chase online clout.

Maribe, who has a seven-year-old son with the comedian, was not amused by his post and appeared to claim that Omondi is an absent dad.

Don’t complain Maribe! Toy allowed yourself to fall for a fake love but now you are complaining about responsibility? That is exactly what you should have have thought about before you hit the sack with Omondi! Did you see the guy was a loser the moment you met him? Take responsibility too and move on to greener pastures! You can’t draw blood from a starved tick!

There are some things that appear simple but when analyzed, you find that they are quite complex.For example the matter of sex. My understanding is that many women dont orgasm through penetration.And knowing african men in general, that's their main goal-to release the "tadpoles".They see an attractive sexy woman,and they have this urge to mount.The idea of taking time to "warm her up"does not enter into their mind.This explains why men visit prostitutes,and women dont...Secondly women have alot to loose in reckless pregnancies.Given this, why would awoman engage in sex,if not to get pregnant,that is if she has no protection,expecially in this day and age.And why would aman ejaculate in awoman,unless he wants to make her pregnant.Its too riskly ,and irresponsible to go with the off chance that pregnancy wont occur.
How come something lead to another as Omondi puts it.Common sense dictates that this things dont just happen in a second.There is always time to plan ahead,unless you are irresponsible...
I dont claim to be more responsible,and manly,than the rest of you men,but I have walked away from beauties who were ready to mount,due to not having protection.So have many, Iam sure.So I dont see pregnancy as being an accident,save for contraceptives failing.
So my judgement is that Omondi intended to impregnate this woman.There is a child now from his action.Pay up Eric.

Am not a big fan of Omondi but these Kenyan women can be really stupid.

So you want us to feel sympathy for you for not achieving your goal of being a successful gold digger. KUBAFF.

Maribe can gold dig the new house Omondi just bought in Karen! I think the gold digging part is what is keeping men away from solemnizing marriages! I am now scared of saying “I Do” because those two wards can make you go broke! By the way, how does come we stay kind of relationship work? Any body?

@ Ali, Iam a proponent of come we stay. If you find a lady willing to go for it. This marriage certificate is just for legal purposes in case things go wrong.It also gives your spouse the legal right to bury you,and inherit your wealth.You can also use awill to disperse your wealth.And not you cannt take your wife out you your will...If you dont care what happens when you die like I do,it makes not difference.Come we stay is the future.Those who are in come-we -stay are just ahead of the bell curve.
I speak with no religious overtones as you can see. Meaning that if you are into religion,and you think you will be offending your creator ask him for a waiver...

Thanks @maxiley for your good advise, all things being equal and equal! I care what life I live here on the planet earth! I don’t want some crazy noise from some Chic forcing me to marry her!

I do having a living will for all my concubines; and they are many to say the least! But no strings attached; I mean to me!

When time comes and I go, I don’t care what goes on because I can’t control those events! I think Kanju askaris can get tasked by the government to burry me or whatever for a few from my assets!

So, I will try this come we stay with one murembo that has touched my heart softly! My heart keeps jumping every time she comes around! You know those with everlasting sweet spirit that pull out the evil out of your bosom? She is that kind! Good ol natured country gal!

I will pass on your message to her, to pass it on to her father🍉👅😜🙌! I can see the fireworks coming!

Else, we will both elope to some far land in the, “come we shack in arrangement”! I just want some little piece of mind and no hustle type of setting! And with benefits…!

Hahhaha @ Ali, send her father some cash for the coming holidays. Let him enjoy,and have fun before you jolt his heart. Cash is agood buffer and a mind changer when well timed.Then go down on one knee, glaze in your murenbo's lovely eyes,and say,"come we stay.