The Alchemist: Popular Nairobi Nightclub on the Spot over Racism Allegations 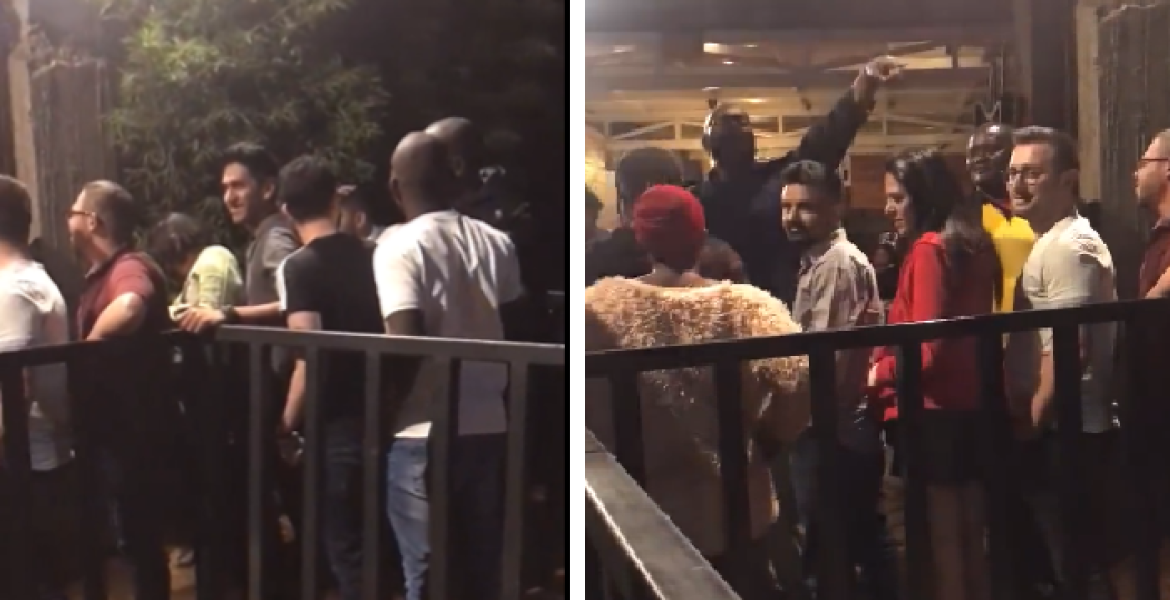 Popular Nairobi nightclub The Alchemist is under fire from Kenyans on social media over allegations of racism and discrimination.

This comes after a Twitter user by the name Slim Daddy posted a clip on the microblogging site alleging that the joint has been discriminating against black people at the entrance.

In the video, a black man believed to be a Kenyan is seen queuing at the entrance alongside Indians and white people before a well-build African bouncer orders him to move away from the queue.

“How will we ever beat racism if we are racist against our own selves. Last week when I went to Alchemist there was a line for White and Indian people, separate from the blacks’. One black guy tried using the line akachujwa immediately. This is sad really,” Slim Daddy wrote.

Following public outrage, the club issued a statement confirming that it is aware of the viral clip and has since reached out to the individuals in a bid to get more information regarding the incident.

“Since we opened our doors, The Alchemist has always been a home to creators, partners, musicians and customers from all different backgrounds. It’s clear from the response so far that we need to do better to ensure that our mission is upheld every single moment of everyday.”

“To anyone that has felt aggrieved, we sincerely apologize and we look forward to sitting down together and addressing these issues head on,” the restaurant stated.

Stop that nonsense apology. You don't have high enough IQ for self respect? How can you discriminate against black people in their own home? In China they're thrown out into the streets and blamed for Covid-19 that actually began in China, in U.S.blacks are shot down with a gun like mad dogs- and now they' re disgraced in front of Esau in their own land. Someone aught to burn down that club and teach you a reason. Kenya is our own home!

Shut it shut it or Wakenya should burn it to ashes.Wapeleke Hizo uracism makwao sio Kenya or Africa

Black on black racism is the worst ever and most common!! We hate out own wivu mbaya, chuki ya kuua, never support each other, even in workplace, watakusaliti kwa wakubwa wengine mostly wazungu! Shame on us!

@kipruto - why are you speaking the truth my brother about ‘us’? Wengi wetu are cursed I don’t know from where….

Discrimination happens every day in Nairobi joints. AlChemist just happened to be caught on camera discriminating among customers. Restaurants discriminate too.

And that is why when you witness it, record it and expose it. This bullshit in 2022 has to stop.

The problems appear t not be the whites, or the Asians. It is us the niggers acting stupid by encouraging discrimination against ourselves. How smart? Bure kabisa!! That club needs to be closed down completely.

This club should never again operate in Kenya. It is a shame and a disgrace to our country, our people and all the blacks in the whole of Africa.
There time is up for this discrimination that is the reason they are being revealed who they are.
Time for those small apologies and useless investigations where you find yourselves " NOT GUILTY" are over.
Psalms 83: "They have taken crafty counsel against thy people....
The tabernacles of Edom, and Ishmaelites; of moab (Chinese)...
Inhabitants of Tyre".
No apologies, Our brother's and sister's in America have dealt with it for 400 years. Where is their apology?
Africans should not entertain this type of treatment. It's childish and very irrational.
Just shut the club permanently and send home the owners with a one way ticket never to step on black man's soil ever again.
What time is it?
Time for Separation, revelation and restoration!!!

Ati racism. Wakenya hunena huyu Mjuaji hujifanya anajua mengi sana. Wrong. I know no Sh..t. Racism between Kenyans and Kenyans should be the most painful of them all. And then racism between Africans and nyeuthis is even more excruciating. And the worst of them all is religious racism between Kenyans saved righteous men and alleged sinners. Worse so in Baltimore, DC area, Silver Springs, etc. Holier-than-thou Kenya Christian Fellowship in America members Preaching wine and drinking water, if thats what the saying goes. These brethrens are a good example of who we are as Kenyans. They take care of their own by networking on little men like unrighteous mjuaji to hit their budget. But when a sinner like Mjuaji cry and need help, halleyah, they wont even show up, yet they begged you to go-fund-them. Kinda always ask myself: what is Christianity all about? Love...noop. Neighborhood....noop? Help the needy...noop? Hate, discrimination, racism and hypocrisy...yes and yes. Based on their own judgement, mjuaji is a candidate of hell, while their entry into heaven will be like a walk in the park. What a selfish assumption. Islam is all about practical love, care and truly helping those in need. Wakenya acheni kupiga domo mnapo baguliwa. Go put your house in order first. I hope Mkenya halisi, Mugikuyu, Mlachake, and other comrades dont feel like I do. Amen.

Preach on Brother. I have to experience racism huku and then I have to go home and experience the same. Suffice to say when I see it when I visit, I raise my voice. Ujinga but it also says a lot to these middle-class Kenyans who see this in those joints ( because they exist) and turn a blind eye. It's only when they travel outside their bubble that they realize those they revere huko Westlands, Junction etc hate their black skin. Africans should not entertain this garbage. They need to shut it down, iwe funzo!

Boy you got some deep vocabulary on this racism thing @mjuaju. I keep turning the dictionary but still I can find the true meaning of some of your words - such as “excruciating”! Is that like pain women get giving birth? 🦹‍♂️

What the hell is this? Am back!! All the way from maai mahiu