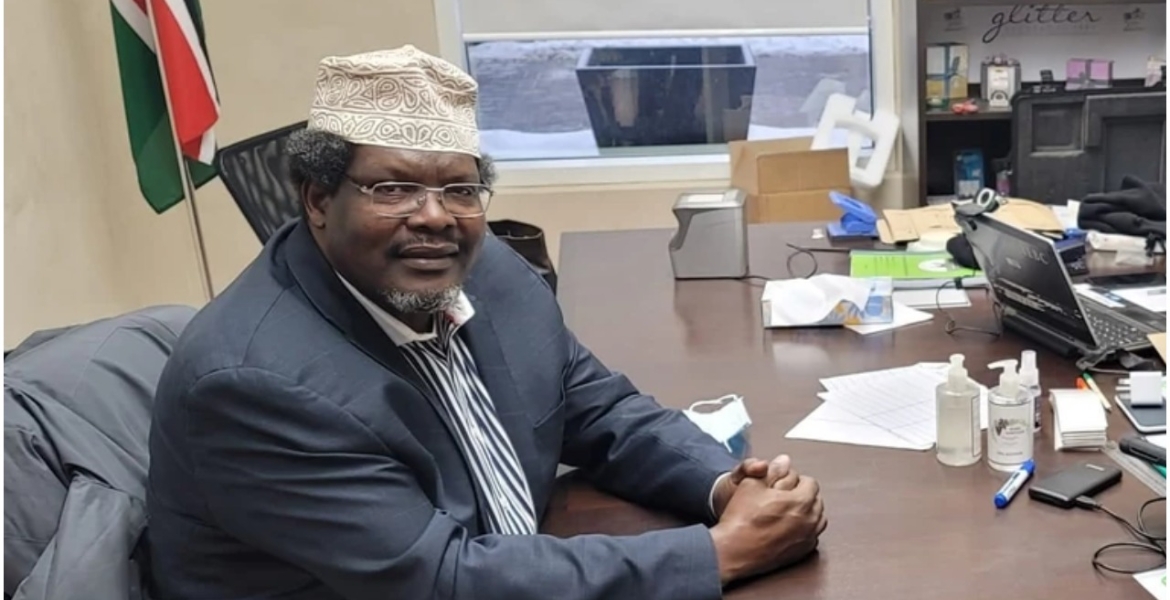 Miguna, who was deported to Canada in February 2018, says he will be traveling to Kenya later this year to attend the official swearing-in of Ruto and his running mate Rigathi Gachagua.

"I'll be in Kenya to attend the official swearing-in ceremony of William Samoei Ruto and Rigathi Gachagua at the Kasarani Stadium,” Miguna said via a Facebook post.

Miguna earlier endorsed Ruto’s presidential bid, saying it is time for Kenyans to end what he termed as a “cycle of dynastic tyranny” that President Kenyatta and ODM leader Raila Odinga are trying to entrench in the country.

He said he is supporting Ruto because he has committed to adhere to the rule of law, respect human rights, obey court orders, and uphold the Constitution.

“Ruto is the only person who said he will allow me back immediately. Raila has called me a barking dog yet I am here for swearing him in,” said Miguna.

Ruto, who is eyeing the presidency on a United Democratic Alliance (UDA) party ticket, was on Saturday cleared by the Independent Electoral and Boundaries Commission (IEBC) to run on August 9th.

He is expected to lock horns with Odinga, who is giving his fifth stab at the presidency under the Azimio La Umoja-One Kenya coalition.

Miguna x2 you have lost all your credibility in your quest to fight your former boss. Your mouth has been a major source of your suffering or maybe something else is going on between your ears.

Miguna’s arrogance does not allow his empty head to reason out properly. This guy is always on the losing side. He miscalculates everything time he opens his confrontational mouth. There will never be a Ruto presidency Miguna.

We used to heavily criticise Dr. Koni Hanene when Dr. Hanene painted Miguna as dillusional person with no clear agenda. Dr. Hanene either died of Covid or is in Nigerian forests trying to establish the link between Nigerians and West African monkeys. I hope one day he will be able to give us an answer if he is still alife for humanity need an answer to where Nigerians originated from. Miguna X2 need to put his acts together

Dr Koni Hanene is another bigger nincompoop! Much bigger than Miguna Miguna. I don’t know who gives these idiots these titles while they are plainly stupid.

It all goes to show that in every tribe there is some crazy wag - M2 from Luo land and Hanene is a half kikuyu from Meru.m - maybe Tharaka Ndizi. Just go figure!

You will wait for a long long time sir.

He would have Made a Good running Mate with WEEDman George "Mandevu" Wajachoyah.

Perhaps you will be sweating him like you did to Raila. You are a rotten mess sir. What have you done for Kenya all these years other than bickering? Kenya can do better with less of your type.

Miguna Miguna has no brains. Just look at the thug talking out of defeatism and frustrations. The guy is very dirty both mentally and in appearance. Miguna is a nincompoop.

Akinyi, Miguna is a nincom who? I thought he is a Luo.

The guy is a very stupid nincompoop! Well, I love your good jokes @Mlandizi.

Yes, Miguna. You are a confused useless and inconsequential barking dog!!!!! There are laws in Kenya and a president cannot unilaterally circumvent them for egoistic and selfish demagogue like you. Apply to reinstate you citizenship like everyone else, FOOL!!!!!

Useless idiot talking crap. Shut your damn mouth Miguna Miguna. You are the most trashy guy ever known to exist or walked on the face of the earth. You are really a cursed element. You will certainly going to be ashamed because RAO will be the 5th president of the Republic of Kenya. You dummy!

So kenya is all s out you Miguna and Ruto because he will do you favors? Don’t pack your junk yet because Raila is winning and he will make sure your crazy ass never steps back in kenya.

Miguna Muguna - Does Toronto have black folks Barber shops? You are beginning to look like a bushy monkey with that shit hanging off your dirty cap.

A good hair cut might earn you an entry back to kenya. Please don’t bring your Canadian head lice to our beautiful country. Just saying @miguna Miguna!

Dream are okay regardless of possibility.

So what this guy is telling us is it doesn't matter who becomes the president a thief criminal murderer as long as you commit to let back in Kenya. He should know Kenya is bigger than him. Also even if Ruto win uhuru will still be a president until he hand over the sword. So practically impossible to attend swearing in unless uhuru allow it happen.

This despot is very stupid. He is so easily fooled by Ruto for saying he will allow him back to kenya.

First Ruto will lose on 9 August 2022 - so there is nothing to cerebrate. and second, Miguna would have been killed if he was dealing with Ruto. Miguna Miguna - Think of what Ruto did to Yebei, Juma, Musando, Kenei, etc!

He just extended his stay in Canada another few years. Then he’ll be screaming that the election was “stolen” in a few months.

Wow, is Miguna alright? The guy looks so deserted, lonely, dirty, aged, and sickly. Is there no food in Canada? Is he homesick or what? He is looking like a street thug.

Those crazy beard and that rugged yellow dirty cap got to go M2. Maybe that is the reason you are not allowed back to kenya because you look like a terrorist.

Hey just clean up a little bit for the sake of your wife and your beautiful daughters. Jeez Miguna Miguna. How low can you go?

You can walk, Swim then walk until you reach Kenya because no airline will take you. Begin the walk tomorrow to avoid being overly late to your destiny (NBO).

Why is Miguna Miguna looking all beat up? He looks quite unkempt and rough. Is Canada being too hard on you Miguna? Use a little bit of drinking water and clean your face boy. Look at your scuffed fisted hands. Who have you been fighting Miguna Miguna? Hope you ain’t beating wife and kids..

What happened to Willy Mutunga and Havi helping you to return to kenya? They all thump chested but left you traveling to unknown lands with huge bills to pay. Wow, Miguna! These guys fooled you and misled you as well.

Take heart Miguna Miguna but please do not count on Ruto winning the presidency this time around. He will lose badly (hands down to RAO) because Baba Man the 5th president of the Republic of Kenya has got the presidency locked in. Just do the math by the voting blocks - you ain’t a dummy!

You may want to reconcile with Baba by taking back all the insults and humbling yourself. That might be your easiest ticket back to Kenya. Have a good day boy Jean.

All these few below belly insults to Miguna is because he is exercising his democratic right and happens to support Ruto. If he was supporting Raila, you could have seen so much praises of him here. So who stands foolish here? Not me. Not Miguna.

Both you and Miguna Miguna stand very foolish because you are supporting the most corrupt guy in the universe.

Is stealing Muteshi’s 💯 acres not a crime? Is Weston land not stolen? How about the land next to state house? And what do you say about the shs 25 billion that was recently intercepted being money laundered by Ruto throw his Nigerian mafia group?

How about the Kenyans who have died in the hands of Ruto - Yebei, Kenei, the Kiambaa women and children, Juma, Musando’s, etc?

These are just a few things within Ruto’s circle of UDAku criminal friends and enterprises. I have not even started on Rigathi yet. His wrap sheet is similarly huge as compared to that of DP Ruto.

So Miguna is being justifiably being rediculed because he knows better as a lawyer. For you @asista, the world know you are just a dummy and nothing can be done to help you out.

@Kipkirui, Miguna has been very critical of Ruto for a long time and rightly so. However because of his reckless mouth, Baba knew he no longer wanted the "militant general" by his side to become president. Hence if anyone heard a loud thud it was Miguna being dropped by Baba. The cold in Canada has been biting and Miguna wants to be home by any means possible even if it means losing face. The Ruto thievery gravy train appears to be the only means possible at this time. With him is @Asista who hopes to get a "kacheo" somewhere even if it means being the ambassador to Afghanistan or Ukraine. These two make decisions based on their own selfish gain.

Muguna Miguna is a political whore; and a huge one too. Glad baba man got rid of him. He would have been such a big liability to Azimio. Let the goon stay wherever he is in the cold.

@asista - it is widely known that you are foolish. You have been proven stupid many times before for defending a fellow kalenjin thief in the name of Ruto. So, you are foolish.

@assista’s other name is Oscar Sudi the dummy! Both are nincompoops.

Make use of the free Canadian government provided mental health. Being delusional is a mental condition.

Miguna Miguna have been used to free things in life. Canada has perfectly provided that kind of life for him.

Unfortunately he doesn’t even know how to use the free soap he gets every week to clean himself. This guy can’t survive in Kenya anymore. I don’t understand why he wants to return to kenya as lazy as he is.