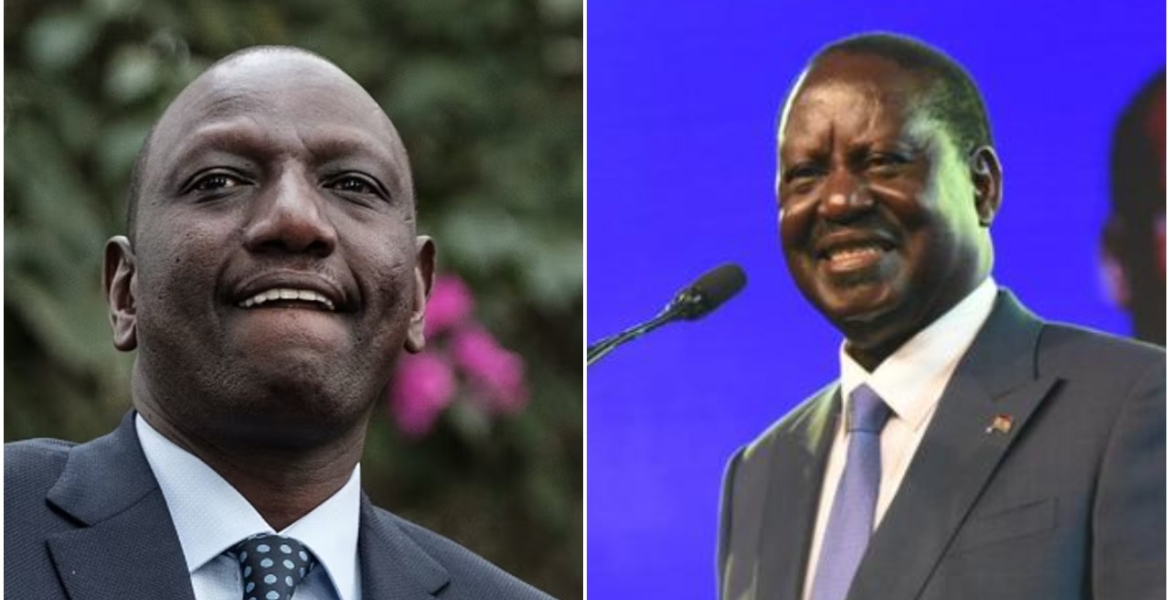 While launching his manifesto on Monday, Odinga claimed the influx of ‘mitumba’ was to blame for the collapse of the country's textile industry and pledged to revive the lucrative sector if he ascends to power after the forthcoming elections.

“Our textile industry was killed through liberalization but then they brought Mitumba, it killed all our sector industries. Our people are only wearing clothes coming from outside the country that have been worn by people who are dead,” Odinga said.

“I’m saying that we are not moving anybody out of business. We will ensure that those who are importing mitumba get the first hand to market goods that are going to be manufactured here in this country. We will get the cotton, jinn it here, spin it here and make finished products here,” he added.

But in a Twitter post on Tuesday, Ruto dismissed Odinga’s manifesto, saying his plan for the country's textile industry will kill the second-hand clothing business and render millions of people jobless.

Ruto, who will face off with Odinga in the August 9th presidential contest, said his bottom-up economic model will spur the growth of the textile and leather industry.

"Trickle down is dangerous. They branded business people's merchandise counterfeit & destroyed them. Now clothing enterprises are dealers in dead-people's wares to be banned. BOTTOM UP, using TVET will assist these enterprises grow from sewing, cottage to textile & leather industry," Ruto wrote.

Odinga replied to Ruto’s tweet with a video capturing the deputy president at a past political rally promising to ban the importation of mitumba and endorse the rollout of locally manufactured products. "Ambieni wale majamaa the internet never forgets," Odinga captioned the video.

Never Trust a Bald-headed Man's Judgement like Chebukati. Most Baldheads are so Schooled yet so Uneducated and Untrustworthy.

When it comes to mitumba,I will go with the laissez faire philosophy. I see"mitumbas" in USA existing and thriving figuratively side by side with other clothing products.Some imported.
What I can on this matter is that, mitumba has amarket in Kenya,and its not Railas' Uhurus, Wanjigis,Sonkos...It's mama mboga,and baba githeri... so leave the market alone(laissez faire).
As for creating jobs, we do not have to revive "relics and dinasors". Let's be creative and innovative,by employing new technology,and" interllectual property "of our institutions of higher learning. Why cannt we come up with improved cars, trucks, radios,cell phones,and export them...? Dont we have what it takes? If not why not...? That's how we reduce unemployment to manageable levels.Incidentally that would stop the current Arab slave trade.Our sisters would be safe here...Mmmmmmm relatively safe. My two cents.

@maxiley, I’m sick and tired of seeing Ruto wear those deep red mutumba pants which always remind me of the blood of the many kikuyu women and children he burned alive inside the Kiambaa church in 2007. He wears them intentionally to aggravate the families of those he killed.

I know you don’t care about that because only 2 Luhyas who got burned, but Ruto was wearing those mitumba pants when he lit the match. So the sooner the mutumba can be banned in kenya, the better.

@ Gatheca, when you are pining away after your wife serves you with divorce papers, it does not matter that thousands on the same day have suffered the same fate... You get my drift?

Ruto does not want the Kenya’s textile industries revived because he is happy wearing those crazy second hand pink, red, yellow, light green trousers and farakano tight shirts bought from some dead Chinese. Ruto is a good customer of the mutumba clothes.

Kenyans are ready for new high quality clothes that are made from local materials produced in Kenya, by Kenyans , for Kenyans. It is good for Kenyans to wet clothes with a label - made in Kenya.

The manufacturing clothing industries will also be operated and managed by Kenyans. This is the way to industrialize kenya and have long lasting stable jobs for Kenyans.

Raila has a good point to revive Kenyan industries.

So am not the only one who notices WSR outrageous color clashing…Chei! An hii peas wakiiba, hawawezi pitia Little Reds pale Tom Mboya???

And those Ruto unfitting red shoes acquired from some dead Chinese. Ruto is the prince of color mismatching of mutumba clothes. The guy has no taste.

WSR is very clueless! He just opposes good ideas just to oppose. Ruto does not what kenya needs to do to be self reliant by creating jobs at home.

Mutumba clothes, pots and pans, dirty shoes are highly overrated. If clothes could be made in kenya by Kenyans, the better for our country.

@Juma there is no good alternative from both as far as environment is concerned. But costwise there is no way textile industry can produce avodable clothes for many . when i pass at mitumba market i overhear mbao mbao , hamsini hamsini and shoes mia mia mia miambili etc mitumba is affordable but it would be better if Kenyans had income to afford unused clothes some indeed from dead people some from infectious deceases but raila want kenyan to plant cotton and manufacture clothes which can take a while but the cotton will take away food crops land . now and at this time we do not have enough land to grow crops which can feed us and it will get less since we have no zoning most land in the market is for building . we are deviding our land even in urban areas into 40x50 1/4 1/2 plots etc for quick cash without after thought . The federal and county governments are sleeping. they will wake up too late . No governor will want this subject raised they want votes at all costs . Raila has shot his foot , lost a vote or 2 he could have waited until he is president . i have never voted will never do because it will not change anything but i admire those who line up for hours , but maybe my id is being used if they can use ids from the dead what of the living who they see are unregistered. anything is possible in Kenya

We want textile industries plus many more to be revived to create more jobs for the youth.

China is dominating the world manufacturing stage because they are building things. The same thing with South Korea and Japan. We need to start manufacturing industries in kenya to expand our economy.

Let’s not always think of 50 50 deals you can get with those used clothes from outside our country. Clothes you don’t know who used to wear them and if they are clean enough for you to slip them on. Cheap stuff is not always the best for your health @loise. It’s good to think bigger than those short lived deals you get in mitumba clothes.

The old lady @loise is just talking the little show knows from what her illiterate teachers taught her over 70 years ago. Ignorance is just a bad thing. She does not know any better.

You should not be contributing here if you have never voted @loise. You have a very weird way of seeing things in life.

You have denied yourself the inalienable right to exercise true democracy of voting for your voice to be heard. So stop telling others what to do if you don’t have time to vote. It is such a shame that you have not voted all your earthly life but you are often hear offering your skewed opinions to others.

Kenyans are too dependent on Chinese made items. The mutumba used clothes should be banned in kenya.

We need to revive our textile industries and make our own clothes. It will create Jones in various sectors of Kenya’s economy.

Kenya’s industrialization is something Ruto does not understand because he made his wealth stealing from money collected from poor people’s taxes.

How did Ruto became a millionaire and he has never held a job in kenya?

My 2 cents are, mitumba didn't kill the textile industry in KENYA, but mismanaged of the companies.
How comes most vehicles driven in kenya are SECOND hand and new car dealerships don't complain?
What these two need to explain is how CORRUPTION, public funds misuse will be dealt with.
I bet KENYANS don't want to go back to the viraka eras.