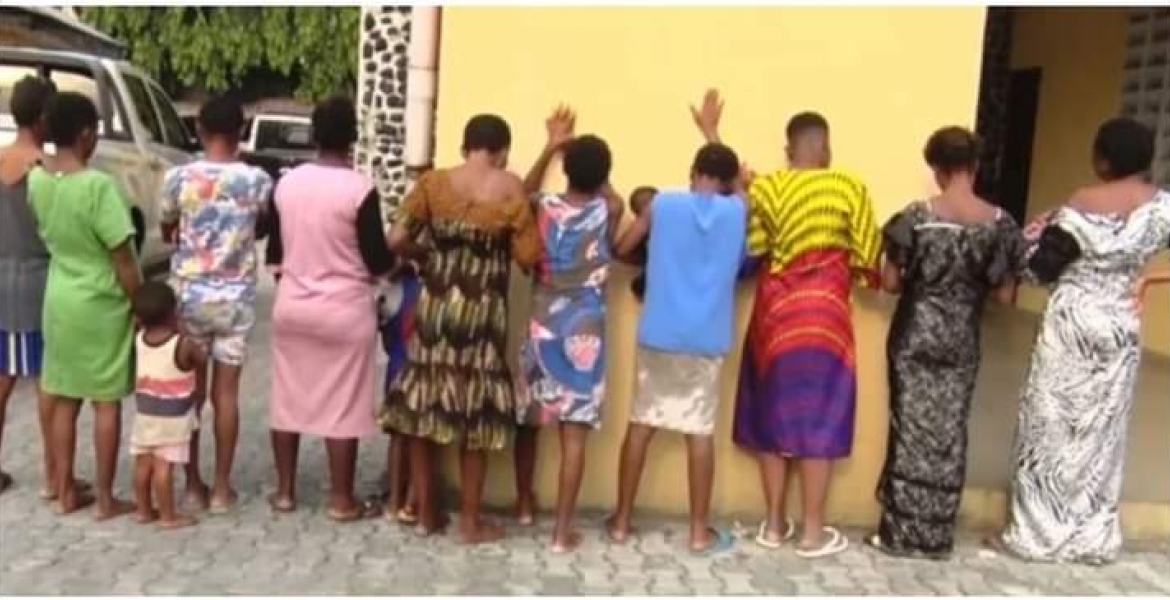 The teenager was arrested after Rivers State Police Command uncovered and shut down a baby factory operation in the Obio/Akpor and Ikwerre local government areas of the state, Nigerian news outlet PUNCH reports.

Four suspects were apprehended in connection with the illegal operation and 10 pregnant girls were rescued.

Police said the 17-year-old boy and a 29-year-old man named Chigozie Ogbonna were hired by the syndicate to impregnate the women through marathon sex.

The leader of the syndicate, Peace Alikoi, 40, would then keep the babies and pay the mothers a sum of N500,000, while some of the babies were also sold.

Authorities acting on a tip-off raided two houses in the Igwuruta and Omagwa communities where the victims, most of whom were pregnant, were being kept.

They were rescued and taken into custody for further investigation. Police also recovered a Honda Pilot Jeep from the syndicate leader.

“All the victims confessed that they were lured to the illicit sales of children because of the need to meet some financial challenges,” Superintendent of Police Grace Iringe-Koko said.

The case has been transferred to the State Criminal Investigation Department and efforts are being intensified to track and arrest the buyers of the children already sold out.

If Jesus Christ were to hear this story, he would be shocked and shout in dismay 'Jesus Christ".

I think he would exclaim ,"Ohh My God..." Wow! reminiscent of what slave masters used to do.The only difference is that,the studs were not paid,and the master was rewarded with more slaves.

He won't say OMG but IAG!

Can they start with you?

There is nothing more unspeakable than a laughable Moo(o)rheaded comment. You showing a great lack of intelligence is not so much a shame, as being unwilling to comprehend and rejecting something you don't seem to understand anything about.

Interesting how the media likes to use scintillating headlines to captivate the readers.Reading the headline alone one would think that the story is about the 17 year old boy,when its truly about "production of babies for sale"

Did he Rape them? If No? Arrest the 10 Women; and Leave the Unicorn alone.

Actually I agree with you. Those women should be arrested for having sex with minor unless the boy raped them

@Bmore, let me throw a wrench into the mix.How about if this was not actually "Sex" but labor. As you know labor laws allow minors to work.Not only that, Pornography is not considered sale of sex,but entertainment.So agood lawyer could argue along labor law which could pretty much free the women.

@Bmore, let me throw a wrench into the mix.How about if this was not actually "Sex" but labor. As you know labor laws allow minors to work.Not only that, Pornography is not considered sale of sex,but entertainment.So agood lawyer could argue along labor law which could pretty much free the women.Remember the "company" is in business of producing and selling babies.

@ Formerly guest2, it's still against the law to have sex with a minor...17 years,even with consent.I dont believe that its legal in Nigeria.
Lastly, the boy,and the women were being used as "intruments" of production,so probably the deal was between the recruiter or the company,and not between the boy and the women. Whether the boy enjoyed the sex is not the issue here... Sperm donation is.What say you?

Bishop Kiama says you do not refuse to give the seed when requested.

Nigerians truly are the kings of scams only a Nigerian would think of a way to make money even if it means exploiting his people .As long as the children are going to good homes and are not being brought into the world to be exploited or abused if rich foreigners or even Nigerians are willing to pay to get the kids so be it but again the apple does not fall far from the tree and this children will be child laborers or worse.Men are willing to do this for free it is convincing these women that after 9 months of heavy lifting they will get 1000 dollars and it appears his or her plan worked.

This is down right disgusting ! Ati marathon sex, ew. Disgusted with both the boy and the woman !