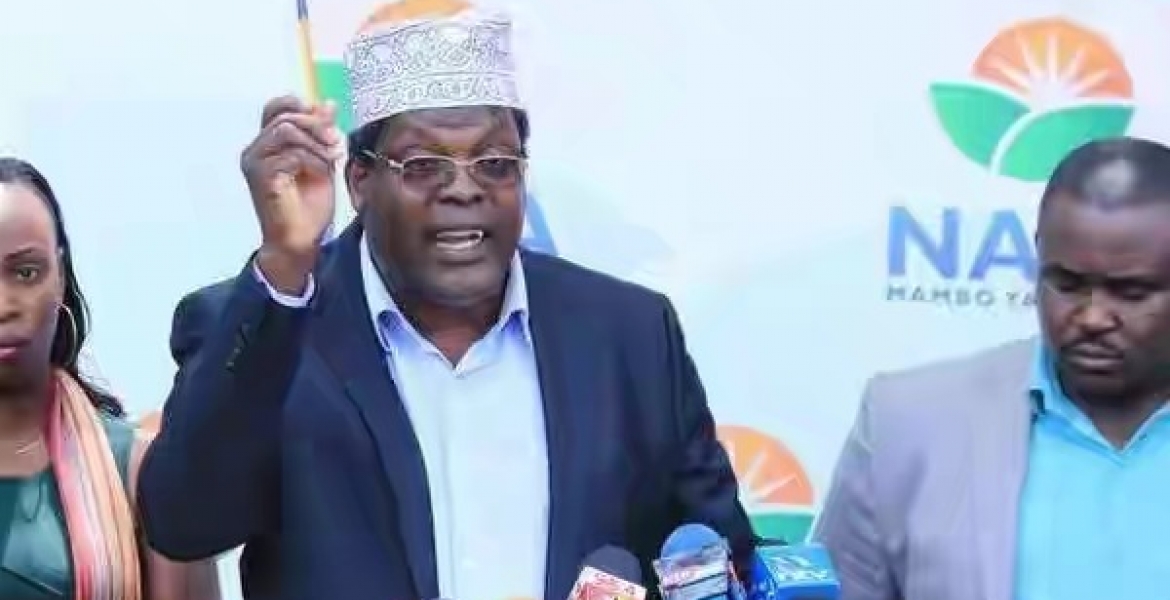 In the letter, the firebrand lawyer accuses Odinga of abandoning Kenyans and his supporters, who even sacrificed their lives in the fight against electoral injustice.

The former Nairobi gubernatorial aspirant further faults Odinga's move to seek peace with President Kenyatta, terming it a betrayal to millions of his supporters, who bestowed trust on him to liberate them from Jubilee "despots."

Here is Miguna's letter to Odinga:

I risked my own life, my family’s security and careers to swear you in on January 30, 2018.

As a result, my house was destroyed with detonators and vandalized. I was abducted at gunpoint, detained incommunicado and tortured for five days. It was only on the fifth day - February 5th - that you attended court at Milimani and spoke out against my incommunicado detention. Why had you not spoken out earlier?

On February 6 and 7, 2018, the Jubilee despots murdered 3 young men at Ahero town in Kisumu county. What was their crime? Protesting against my incommunicado detention and forced exile. The People’s President whom I had sworn in less than two weeks before then never uttered a word. You seemed to believe that those lives didn’t matter.

Despite promising to repair the damage in my house, you have not done so. A few days after I arrived in Toronto, you told me that you would publicly launch a “Bring Miguna Back” campaign. You have not done so. What prevented you from fighting for my rights like I had fought and sacrificed myself for yours?

You also promised to have my advocates paid their fees and disbursements. However, when Dr. Khaminwa met you last week - before your handshake with Uhuru Kenyatta - you not only refused to pay him and the other advocates, you asked him to abandon my cases.

This isn’t just about me. It’s also about the 18 young men who were shot dead as they shielded you from police bullets on November 17, 2017. It’s about Baby Pendo, Baby Moraa, Master Mutinda, Chris Msando, Odhiambo Mbai, Okong’o Arara and more than 1,000 people who have been murdered as they defended you both personally and in pursuit of justice for all Kenyans.

Have you spared even one minute to remember them and the cause for which they died; the reasons for which they sacrificed their lives for you? It was you who rejected the results of the presidential election of August 8, 2017. It was you who called on your supporters to protest against the egregious electoral fraud that had been perpetrated by Jubilee.

It was you who called for protests against the IEBC and in pursuit of electoral justice. It was because of you that more than 380 innocent civilians- mostly Luos - were butchered like chicken after the August 8th election. Yet, barely one and a half months after your swearing in, you are trying to persuade us that more than 1,000 innocent lives we have lost trying to obtain electoral justice for you and the country, don’t matter.

You have just miraculously discovered that Uhuru Kenyatta is your brother and he is more valuable than all of us who stood by you! You didn’t even bother to consult or inform us that you were meeting Uhuru behind our backs as we risked our lives swearing you in on January 30th.

And in your handshake with Uhuru you were accompanied by your daughter, Winnie, and your personal lawyer, Paul Mwangi. You didn’t even bother to go with an official of the ODM or NASA.

Clearly you believe that your personal interests supersede that of the country and Kenyans.

Your handshake with Uhuru wasn’t about peace or national reconciliation as the two of you claimed. If it was, you would have consulted widely and informed key people in your organizations. At the very minimum, you would have advised those who risked their lives for you on January 30th.

Jakom, you have finally demonstrated to the people of Kenya that you don’t care about them. You have abandoned them for the despots when the latter were weaker than they have been for five years and when our side was stronger.

Apparently, you and Uhuru are more scared of me and the NRMKe. You both fear structural changes that we are fighting for. You both prefer to preside over an unjust, unequal and brutal state. You have joined the despots!

Thank you for finally exposing yourself to the people.

Miguna Miguna, you are the fool here because you allowed yourself to be fooled. You worked for Raila before and you should know better. So, your stupidity is the one that pushed you down the waterfalls. Now rescue yourself because Raila has abandoned you and moved on.

The only difference between Miguna and Idi Amin(rest his soul)is that the former is slightly educated.Both are driven by impulsivity and bullying.Their Personalities mostly utilize"id" but very minimal ego or super ego.

Maji yakimwagika hayazoleki. Pick up your pieces and move on. Nobody has time to sympathize with you. Even some are happy you put yourself into a big mess.

Miguna Miguna was looking for political stepping stone (Raila) but now that opportunity no longer exist. The more he continue batching Raila the he dig his political grave.

like him(miguna)or not the truth must be said Raila did put his interest first, putting in mind we re-lied on him for electrol justice but there you are!!!!!!

am sorry miguna , but this isn't a surprise.. I love the drama though

Oh how I agree with you Miguna! But why, Miguna, the man who knows Raila so well to write a book about him, now acting surprised? You were not fooled, STOP acting, you were doing exactly what you accuse Raila of doing...caring for yourself...it was NEVER for the people of Kenya. I AM SO GLAD TO KNOW THAT YOU, NASARIOTS, KNOW THE TRUTH, and say it better than anyone else...and I quote:-

"...It was you who called for protests against the IEBC and in pursuit of electoral justice. It was because of you that more than 380 innocent civilians- mostly Luos - were butchered like chicken after the August 8th election. Yet, barely one and a half months after your swearing in, you are trying to persuade us that more than 1,000 innocent lives we have lost...." trying to obtain electoral justice for you and the country, don’t matter.

Pole Miguna Miguna it’s so hard and difficult for you to swallow that pain pill raila has to peel back the mask on you. Enough of you using him for your political scores and fame.. write another book.. miguna gets played or screwed this time raila will be the author

Doesn't it already sound familiar? Just like "peeling off the mask".

I said it here that most of us who r educated with degrees n masters r the most stupid pple out there.This jaluo miguna had worked with raila n Raila betrayals him then he took his black dark behind back so what did he expect.Raila is known of using pple n dumping them n these r again educated foolish big men with money who have bin totally used n dropped like smelling shit??So miguna man off come back home n please watch yr big mouth juu the same jakom will make u disappear the way he did to Jacob juma n mswando??

Miguna's big ego is his undoing