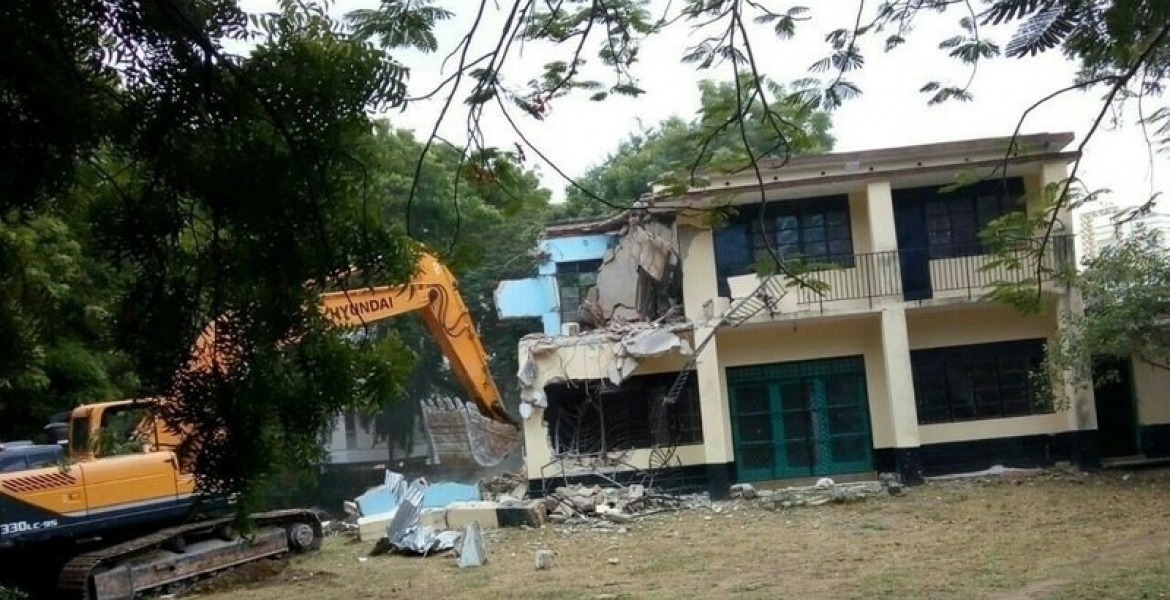 A Kenyan family residing in the United States has written a letter to President Uhuru Kenyatta, protesting the recent demolition of their house by the Mombasa County government.

In the letter dated March 10, 2018 and copied to the now-former US Secretary of State Rex Tillerson, the family of Judy Miriga says the County government illegally demolished their house and appeals to President Kenyatta to intervene in the matter to help the family recover its losses.

Here is the letter:

My family and I reside in USA. Before we went to USA we bought a house in Kizingo Mombasa where we stayed as a family from the beginning of February 1982.

When going to USA we left Tenants in different wings of the building. I send my wife Judy Miriga to Kenya to go and do some renovations and repairs on the buildings in May 2015. In the process she hired some people to clean the main house and hand over the door keys to our land agent Mr Lawrence Nyongesa who is also a Tenant at the other wing of the house after cleaning. I paid them by Western Union Money Transfer through Lawyer William Onyango Wameyo Associates of Mombasa for the work done. One of the worker by the name Ochieng Mapengo after cleaning the house went away with the door keys and came back one week later telling the Tenants that my wife Judy did not pay him Ksh. 3,000,000/= (Shillings three millions ). From that time he started harassing and terrorizing our Tenants claiming the whole plot and the buildings belonged to him. That forced me and my wife to come to Kenya to correct the situation on 14th February 2018. On the 16th February 2018 High Court of Kenya Mombasa gave us a temporary Injunction Order signed by Judge Omollo restraining Ochieng Mapengo and all his agents from trespassing, demolishing parts of the building, destroying or cutting down trees, or in any way dealing with the suit land known as Plot No. 622 Allotment letter No. 75892/XIX pending hearing and the determination of this application for a period of 17 days. This gave him a chance for a hearing to defend himself or raise any question or objection if he was against the Court Order.

We pasted copies of the Court Orders at the main entrance gate and three more on each external doors and we hand delivered the other to our regular Tenants in the other separate rooms in the compound.

After getting the information of the pasted court orders at the premises, he came to the plot and removed and destroyed all the Court Order from the gate and doors and threw them a way and sat at the main gate waiting for us or any police to come.

On 5th March 2018 three days before the Court date of 8th March 2018 he organized with some senior Officers from Mombasa County Government who came with Lorries, the bulldozers and County Workers of about 36 people at around 6.0 p.m. and 8.0 p.m. and forcefully vacated our Tenants and immediately demolished our entire houses at the plot that very night leaving our Tenants under no roof in rain at night. That same evening at around 10.00 p.m., Abubakar Joho brother to Governor Hassani Ali Joho of Mombasa came in the compound to confirm that the house is flattened. The Mombasa Central Police refused to take action arguing that the Order was not addressed to them. To-date Ochieng Mapengo and the Abubakar Joho the elder brother of the Mombasa County Government, Governor Ali Hassan Joho has taken control of our Compound plot after flattening our house and are keeping Security Guards at the gate with Ochieng Mapengo as the supervisor to keep my agents away since we are out of the Country and no arrest or any charges can be made.

What happened is unacceptable and a very serious criminal act in nature. It is an economic sabotage and a social danger and tension to ordinary family like ours. We are therefore writing this letter appealing to your Government to take this matter seriously with immediate action and intervene to protect us from this cruel, brutal and malicious act of the oppressor so that we can recover our loses and damages to our buildings and plot.

We remain to hear from you with the most utmost urgency it deserves.

Thank you in advance

@Miriga pole sana...it's sad to see how some of these power-possessed, greedy 'misleaders' continue acts of injustice especially to those who try to empower themselves....they want Wananchi in abject poverty so that they can manipulate them for own gain.

However, the c.c. to the USA Secretary of State (now NOT Tillerson) does not make sense to me. Why the? It's only the first time you writing to UK, the President of your original citizenship ....me could be wrong....you kinda diluted Kenya's role....me thinks... correct me if I am wrong......it's just me.

@Justme, He is actually actually to c.c. US's secretary of State, State Rep/Senator because as a US citizen, they would actually follow up and help intervene. It's the privilege of being a US citizen. Kenya iko na wenyewe.

Yet there's no question that dual citizenship poses practical problems both for those who possess it and for the government.
@GG - I've heard some shuddering cases of naturalized dual-citizen holders being left alone at the hour of need if the help is required while they are based in their country-of-origin. I also hope this family has declared this asset in their tax filings.....

Below is a para write-up from LA Times:-

The U.S. State Department discourages U.S. citizens from retaining or applying for citizenship in another country because "dual nationality may limit U.S. government efforts to assist nationals abroad. The country where a dual national is located generally has a stronger claim to that person's allegiance." The department also warns that "dual citizenship can present a security issue whether to permit access to classified information which affects recruitment, employment and assignments." In some cases, dual citizenship could disqualify an applicant for a sensitive position with the CIA or the State Department.

Wow.. talk of hostile take over. wanton action like you mentioned is certainly un acceptable in a civilized world.However, Iwould like to hear the other side of the story as well...

@ Max, this is real in Kenya as it pertains prime properties. This is exactly what Ruto has been doing for years; chronic and persistent land and tenders grabbing e.g Muteshi's farm scandal and Langata Road pry school land scandal. The way they do it is quite complex and strategic to give them room to wiggle themselves out incase of a law suit; they will frame/blame you, involve 3rd parties and aliases, blame 2nd and 3rd parties etc.

@GG,if indeed such shenanigans go on,with reckless abandon,the instigators are merely creating trouble for themselves in the future. These evil deeds shall come to haunt them.Trust me on this. Regimes change,people change,laws are amended.Whoever knew those who persecuted jews would be tracked down and punished year later...till today.

What is with these ODM governors? In Nairobi, Kidero and his henchmen were following the same script: They falsify rate payment records (delete receipt information) and then go to court and obtain orders to auction property to recover County money. Court allows them to auction property and a property worth Sh2 bn shillings ends up in some thief's pocket for about Sh20 million. If courts cannot help a genuine property owner to recover their property, do people, especially in diaspora resort to hiring hitmen to tame the likes of Joho and Kidero and whoever else is perpetuating this?

I do not think writing letters will give you solution. This matter should be resolved through the court system. First, obtain documents from the Ministry of Lands to see how and when the land changed hands. Also, do you have title deeds, etc. in your names. Through the judicial process, you will win if the land is truly yours.

Our Judicial system or which? Just see @Ben above... that is the court system I have known for a long time. I have not seen anything so positive lately, either.

Similar stories are being told in multiple high end places. They started grabbing wahindis land..kina kindero and the rest of them. We are electing thieves cos they are from our tribe, period. Very sad.

Wow wow was the house on 99 yrs leasehold juu this county idiots knows the houses,land building which their leases have expired thou according to the law the owner at that time is supposed to b given the option of renewing first so as somebody said up there if u go to court u will differently get yr house back n they will compensate you.If I had a gun n pple show up to demolished n steal my Properties trust me I will shoot them all don’t care bin arrested coz am fighting for my rights from the thugs!Sorry mr miriga Trust me u will get yr plot back n the thief’s will pay u for the houses they destroyed.

I read of this story in my friends timeline and I felt so bad. My worry is that Joho and the CO. that manages Mombasa county government was given power by the wabara that he is now demolishing their properties. Abu was a cleaner and now he is a multi billionaire... Where did he get all this funds. These people must be tamed

The family of Fred and Judy Miriga should get JUSTICE this is heartbreaking!!! This IMPUNITY should STOP!