Kenyans Contribute $4,200 for an Akorino Granny to Return to Kenya after 12 Years in the US 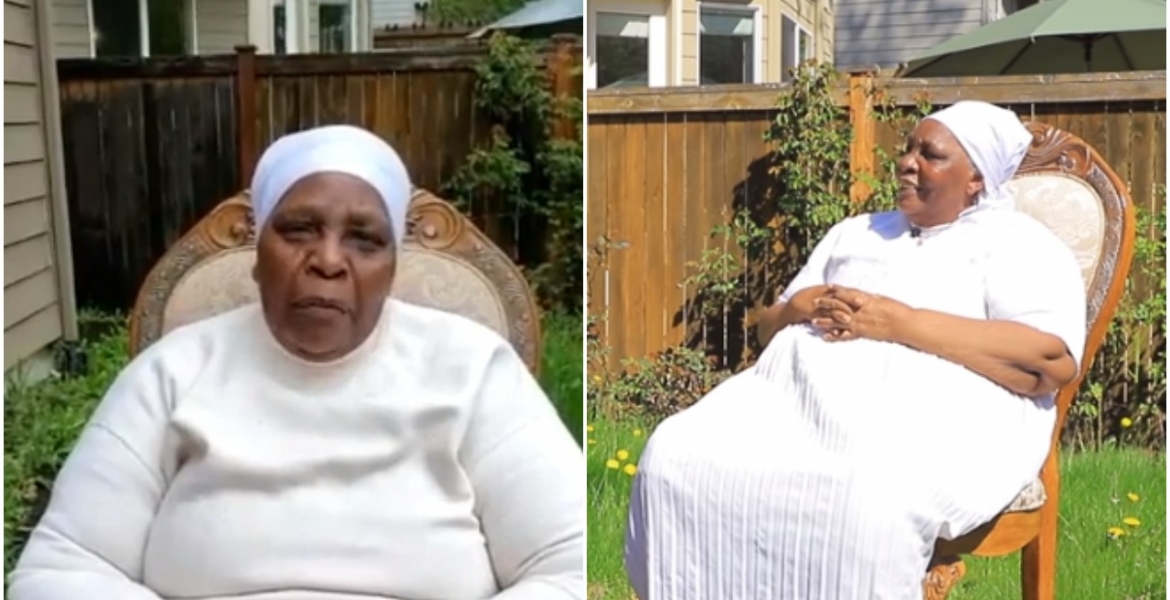 Speaking during a recent interview with Jeremy Damaris of Kenya Diaspora Media, the woman, who did not reveal her identity, appealed to well-wishers to support her as she sought to return home after 12 years abroad.

The elderly Akorino woman said she moved to the US in 2009 after losing her property during the 2007/2008 post-election violence.

Her retail shop in Kericho, which she started after the death of her husband, was vandalized and looted at the height of the skirmishes.

In her first seven years in the US, she worked as a babysitter for different families in Seattle, Washington.

“I have never had a home since I went to the US. I have been living with people who were kind to host me. For the past 5 years I haven’t worked,” she said.

In 2017, she says God spoke to her and instructed her to quit babysitting work and start ministering. She has been praying for people in Seattle and was being hosted by fellow Kenyans until this year when she felt it was time to go back home.

“I ministered for different people and changing homes until that time when I was no longer on good terms with some of them.”

“I feel it’s God’s timing and the best time for me to go back home,” she added.

The woman returned home last week after Kenyans at home and abroad contributed funds for her through CashApp and MPesa.

You cannot be helped in perpetuity. East west ‘home’ is best. Home is where you are happy and can put food on the table. Not where you were born. Glad mama returned ‘home’ after she became unhappy when Trump happened in 2016 and she lost her job in 2017 followed by several hosts growing tired of parasitology! Clearly she was a liability and many would have said ‘phew’ good riddance, punda amechoka!

As much as we vilify each other, its good to note that at the core of our being, there is humanity,and unity among Kenyans,when one of our own is in need. Obviously aNaija is not going to offer a helping hand...first.I guess who ever said charity begins at home knew what he/she was saying.This proverb has with stood time.

Interesting. I wonder what the Ruto supporters amongst us have to say. More specifically I wonder what the ex NJ community leader/current property owner, ex Philly resident, ex Perth resident, "citizenship" renunciating, current green card "holder", fully jipangad, no mortgage holding, Million shilling per month earning diaspora hating/Ruto loving mburoti holding Tigoni resident has to say about someone who became what he hates most because of the actions of the politician he loves most. Irony!

Ok! I will be surprised if mkenya halisi survives this nudge...

...Aussie masters holder.. with a kyuk accent that has defied all manner of life exposure...hata masomo ya juu na majuu...sorry I digress... with a half-acre inherited from his mother and some pinch of salt to impress; now turned motional-cum-demoralizer diaspora speaker....

All the best granny! You have tried your best to make ends meet in America! You have fought a good fight! I hope you have a home in Keri ho to return back to!

DP Ruto should see the end result of displacing people in Kericho, Eldoret and other places in the Rift Valley in 2007/8 skirmishes that he Ruto created! What Ruto did is unforgivable!

Ruto should build this lady a house so she can settle down in her golden years! Good luck lady!

Good that Shosh is going home with something. Which Bible do people read? Paul was a tent maker, Jesus was a carpenter, Peter was a fisherman. They had side jobs beside ministry.

It is a morbid though that Jesus might have made coffins,but again someone had to make them .Right? Unless they did not use them in those days...

Ruto,Ruto,Ruto saa yote pretending you were born after “St” Raila had cannibalized 1300 Kenyans in 07/08 PEV and another 350 Luos after 2017 elections.He had conned the 350 to volunteer to die for their tribe(Amollo) to be president.He went ahead to represent them by joining thug Uhuru in EATING of shs 2b. taxpayers funds on top of being paid shs 10m. per day for owning ODM.Bensuda is gone and savage Raila is no longer above ICC.ATHUBUTU KUUA INZI SASA WACHA BINADAMU.

Calm down Miguna Miguna. I’ve unmasked you from your IP heheheeeee!

I hope Halisi has information about an “American” SSP Mwongela who shot dead a club guard in Embakasi in early hours of May,13th,2021.He should also state the number and names of “American” Afandis who killed a former Kenyan policeman in Nakuru the same on May,12,2021 and shot and injured a Macharia in Kitengela,some 40 miles from Kamirithu.Mkenya should also explain whether he castrated the “American” who raped a young girl from Ngecha before surrendering him to bribe the “American” policemen.

This mama is struggling in her old age because of Ruto and his thugs. Until all the displaced Mwananchi is resettled Ruto should never have peace. May he continue to mangamanga and tangatanga, giving stolen money to equally corrupt churches, collect a few gīkūyū sellouts but he will never ever taste the presidency.

Very well said! Just imagine Ruto being a president? Surely may God for it that day never to come!

Very well said! Just imagine Ruto being a president? Surely may God for it that day never to come! That is the day the sun with rise from the north and set in the south!

Approximately $5000 is peanuts in USA..
THIS SHOWS HOW KENYANS ARE IN USA...
THEY DON'T JUST CARE...PERIOD.

Why were Mt Kenya people in Kericho to begin with ? that should be the question what happened to their land in Mt Kenya region after independence Kenyatta and his cronies took all the land and dispersed the Mt Kenya people all over the country, my advice to Kenyans living in areas that are not originally theirs respect your neibors and their traditions and customs and you will be fine involve yourself in unproductive divisive politics and pay the price

I thought Kenya is a free country, i.e you can move to and live wherever you choose. Otherwise tell me what cities and towns are restricted to what ethnic group. Who owns Nairobi, Mombasa, Nakuru, Kisumu, Thika, etc, what customs am I forced to adhere to while there. Who can I not vote for, do I have to pretend I don't like sweet potatoes or potatoes for that matter, is ngerima forbidden? Burning women and children in churches is evil and quite barbaric and should under no circumstances be condoned. Is this who and what you support?

@RAS menelik, why are you in Nairobi if you are not a Kikuyu, Masai or Kamba? Think before you speak.

Are you aware the other people are free to do the politics you have just mentioned wherever they live? Don't forget Simba Arati is MP for Dagorreti.

@rasmenelik, the Agīkūyūs have lived in the so called Rift Valley for centuries. Some bought their land from the Dorobos, think about that. Be careful cos if we are going to open this can of worms some who think are natives may become the visitors.