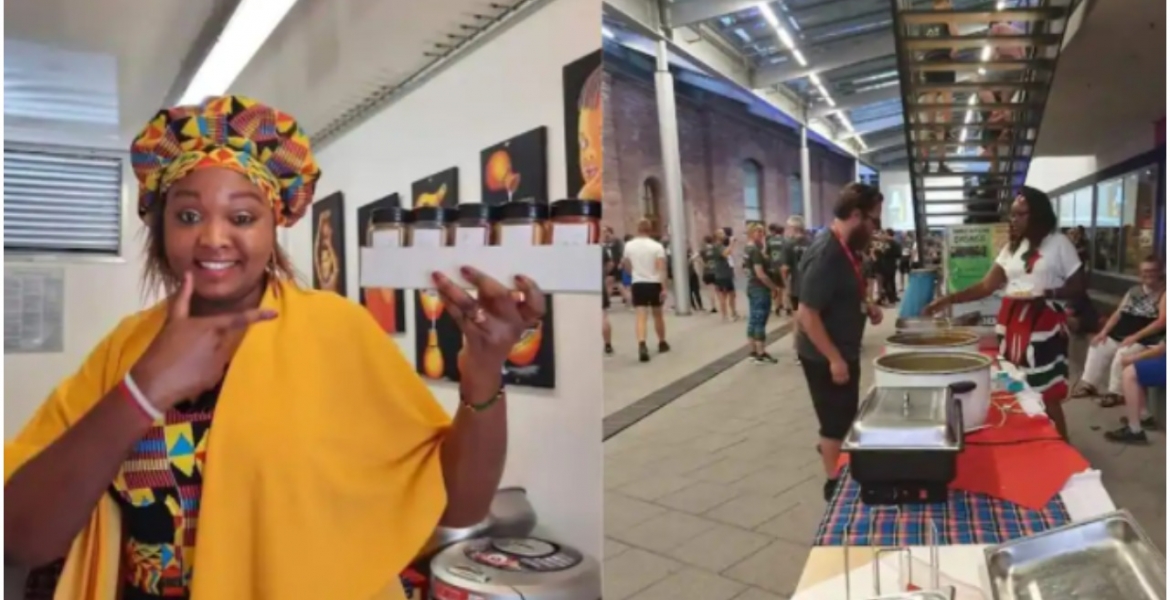 Leah Mugure Mburu, a Kenyan woman living in Germany is appealing for help to find a man who helped her move to the European country more than 10 years ago.

Speaking during a recent interview with journalist Rono Chonginio, Leah said she met a stranger in the streets of Nairobi in 2006.

At the time, Leah earned a living by hawking socks in the streets of Nairobi until she bumped into the man identified only as Brian along Tom Mboya street in the CBD.

Leah says she poured out her life struggles to Brian, who had just returned to the country from India and was planning to set up a law firm.

Touched by her story, the man linked her up to an exchange program in Germany and even paid for it. Through his help, Leah attended German classes besides handling her immigration paperwork.

The two lost contact after Leah relocated to Germany as she did not have a mobile phone then.

“He was bald and dark, a Luo, and must have been in his early thirties,” Leah said during the interview.

Leah, who is married and has two children, is eager to meet the stranger who changed her life. She runs a successful catering company in Germany

“I want Brian and the world to witness the marvelous work God has done in my life,” she said.

It is really good to be appreciative of others when they help! Leah is that kind of a person!

It’s important to thank God for all your successes in life! He is the answer to everything good!! He has blessed you!!

Story seems not to be adding up exchange program for what? and trust a guy who she only his first name.

People trust those who do the right things! And for you @kithoi, no one would want to trust a guy with your type of name.

Leah, Iam glad that you made something out of he opportunity you got,and thanks to the stranger who facilitated the road to your dream,after pouring out your troubles.
Yes there are man stories like this that never hit the media.Usually those that hit the media have some sexual overtone,or something sensational about them.
One very important point underscored here is that,prostitution would be non existent if men behaved like this "stranger". You do not take advantage of down trodden women.Most prostitutes sell their bodies not because the like it.You dont have to buy it.All they need is the money.Just help them out.Here the burden is on men, because they are the ones who pay.My two cents.

@maxiley what do you do for a living. Yo seem to have a lot of time turning a positive story to a negative. we all take our chances the way they come . there are exchange programs even for families who go to live in each others homes and country (experience) it does not matter how who what matters is this lady has come to her senses ' without Brian she would not be what she is today' it has taken long but many just forget many of us are "users" and you maxiley you are a bad bad psychologist you are too negative you are a jealous person you hate to see others succeed

Now this is an excellent & inspiring story Mwakilishi!

I sure do pray and hope that she’ll find him! This is a great testimony & Brian, you gonna be proud of yourself! Proud of you both.

Excellent. Not many remember who helped them up the ladder. Not many want to return thanks. You are a rare breed. Many take it so much for granted and view their helpers as mere stepping stones. May God bless you.

How many dark, bald Luos do we have in Kenya?

A total of 2. Your husband and that other guy who look like your husband!

But why did it take 15 f’ing years to recall that once existed a ‘Brian’ who helped you. Why didn’t you seek him out all those years to say thank you! Mmhh sure, sugar and salt look alike!

Better late than never. You just saw it on the media. You don't know how long she has been looking for him. Let's see the positivity here not the negativity

This is a case of Leah Mugure Mburu, appreciating what Brian did. Maybe she had tried looking for him.
GOODLUCK finding Brian.

Good story. If u dont find him just pay it forward.

From the article, I gather that is should not to be difficulty to trace Mr. Brian, the good Samaritan.If he was opening a law firm,and helped her with immigration papers,coming right from India...etc.He should somehow stand out.Not too many Luos fall in that category.

Wow! Am proud of this luo man, unlike other men who would take advantage of poor lady, use them give nothing or little coins and dump them.
Brain my God bless you.💯
In your law farm or anything u are doing, let you never luck in Jesus name

Mugure which city are you based . we can come and eat chakula ya nyumbani