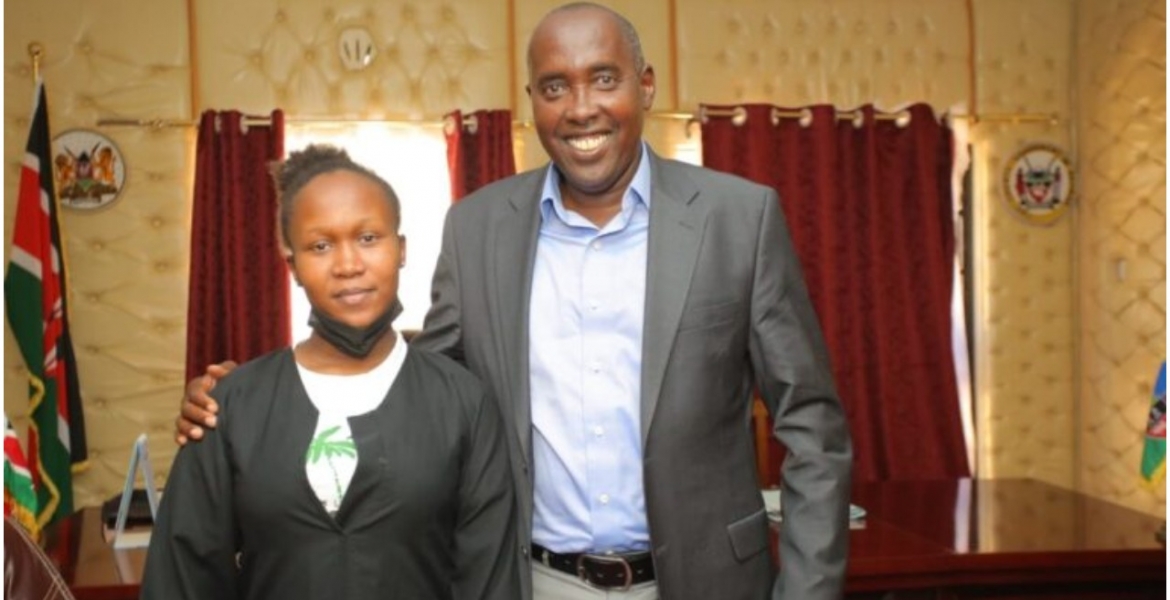 A family in Kajiado is celebrating the return of their daughter who was stuck in Abu Dhabi, the United Arab Emirates (UAE) for eight months after falling out with her employer.

23-year-old Lilian Rimanto flew back to the country on Thursday following an intervention of the Kajiado County government.

Rimanto traveled to the Gulf state in October 2020 in search of greener pastures and was employed as a domestic worker. After working for three months, her employer began mistreating her by overworking her and denying her food.

She says the employer turned hostile after she tripped and fell, thereby sustaining an injury. But the employer insisted she was feigning the injury.

This forced her to run away from the house but she could not secure another job or access health services as the cruel employer confiscated her passport and other documents.

“I contacted the embassy who tried to follow it up, but they faced challenges because the employers wanted me to reimburse the funds since they paid for all my travel needs,” Rimanto said.

“I was illegally in their country and I could not secure another job. I would not go to the hospital because it is very strict there. You cannot access medical care if you lack necessary documents.”

Kajiado Governor Joseph ole Lenku flew to UAE in person to rescue her.

There must be an embassy closer to the uae than Kajiado. Kudos to the governor but please, next time do the most sensible thing.

So these bogus politicians will be flying out to "rescue" individual girls, instead of strengthening legislation to protect all Kenyans?

I agree with you @ Seneca. This is a problem Kenyans are facing in the Arab world.Let it not come to Each governor saving his or her constituents in such matters.Yes the deed is commendable,but its not asolution to this menacing problem our sisters face in the Arab world.The embassy of Kenya serves,or should serve all Kenyans.Yes all Kenyans,from the impoverished to the mighty rich.

Good question. These politicians are joking with stuff

BS you you didn't do anything dummy. Go change the legislation instead, what about all the others stuck there

Respect to the Governor. Might as well shut down the embassy in that country since they don't serve the purpose of their existence. The embassy staff just have red tape and more excuses and empty promises. On the other hand I thought the agents usually confiscate the documents. The article fails to explain how she survived for so long without a source of income. Again respect to the Governor for going out of his way to rescue a constituent.

Now this is a governor I can be proud of! Well done!

At least there comes a good start of a love stories.....she'll live to tell the history of the story to her siblings for almost 2 decades to come - if you know what I meant

Ole Lenku should pay the girl for making him look good. This girl has given him a happy look...he actually looks handsome and confident....something we never ever saw even when he held a national post.
....and yes, influence legislation and quit shows of bravado..

@ Just me, but if you were in her position,is that what you would think,as opposed to"thank you for saving me"Would you really want Ole Lenku to pay you,if you traded places with this lady? I hope you said what you said with tongue in cheek.I have read some of your comment,and you are not that flippant.

Negroes going middle east will always be ABUSED by Arabs not civilized people as even most negroes lands dont hurt foreigners much.