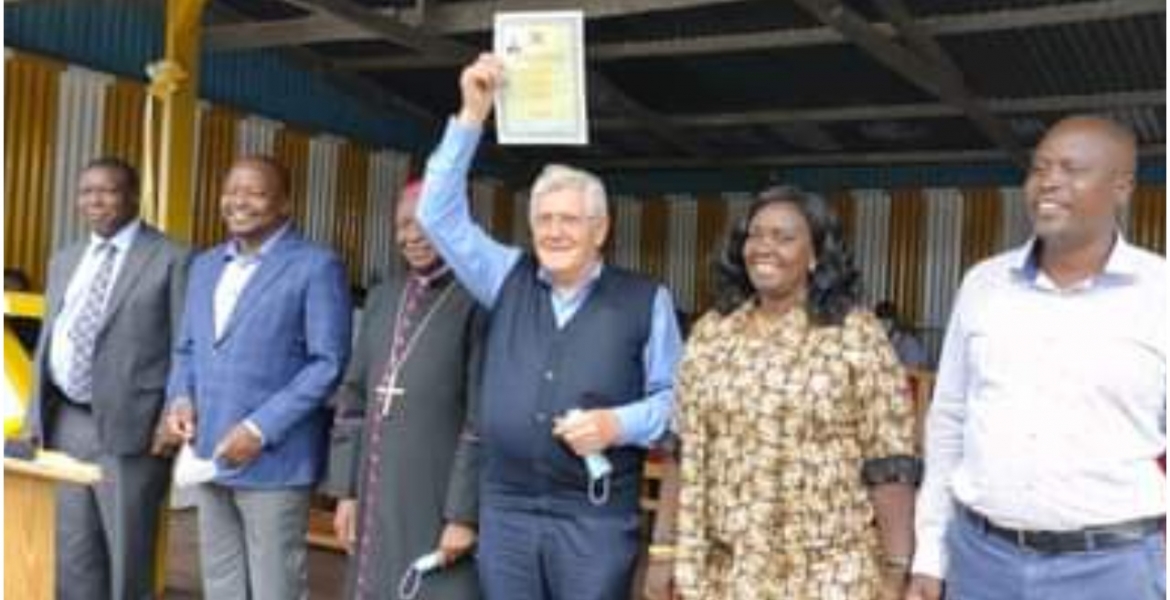 An Italian Catholic priest who has lived and served in the country for five decades has finally been granted Kenyan citizenship.

Father Romano Filipe of Mugunda Catholic Church in Nyeri was presented with a citizenship certificate by Health Cabinet Secretary Mutahi Kagwe on Sunday as he marked 50 years of priesthood.

Father Romano, who has earned the third name “Mureithi”, was posted to Narumoro as a priest in 1971 after being ordained in his home country.

He served in Narumoru for 17 years before moving to Mugunda Catholic Parish, where he has established several projects including schools and a water company.

Speaking after presenting Father Romano with the citizenship certificate, CS Kagwe said the priest had expressed his wish to live and die at Mugunda.

“Romano wants to live among you and that is why we as a government have given him this certificate which now gives him all rights enjoyed by Kenyans,” said Kagwe.

On his part, Kieni MP Kanini Kega said Father Romano deserves a Head of State commendation in the rank of Elder of Burning Spear (EBS).

“This is a man who has done a lot for this community stretching all the way to Laikipia he needs more than just citizenship,” Kega said.

While accepting the citizenship, Romano said he is happy to live and serve the people of Mugunda until his death.

“I will always live among you because you are my family and that is all I need until I die,” he said.

Congratulations! Your kingdom (that includes the Catholic church) gives you an award. Black history and our bible will set us free. On or around 1492, the Catholic church put out a decree known as "Dum Diversas" to enslave the blacks and put them in perpetual servitude. We are yet to bring out the black history as told by the oppressed and not by the victor.
Luckily our kingdom is around the corner!!

Correction. "Dum Diversas" was put out in 1452 by Pope Nicholas v.

Asante sana. I hear you bro loud and clear.
A headline saying a white priest gets citizenship after preaching HIS gospel to unsuspecting wananchi should make anyone stop and think. WHOSE NATION IS THIS??

The powers at the top are here just to provide cover for this rape, extortion and misinformation from their masters. Dont worry though, there time is almost up. This fictional fairy tale wont last forver.