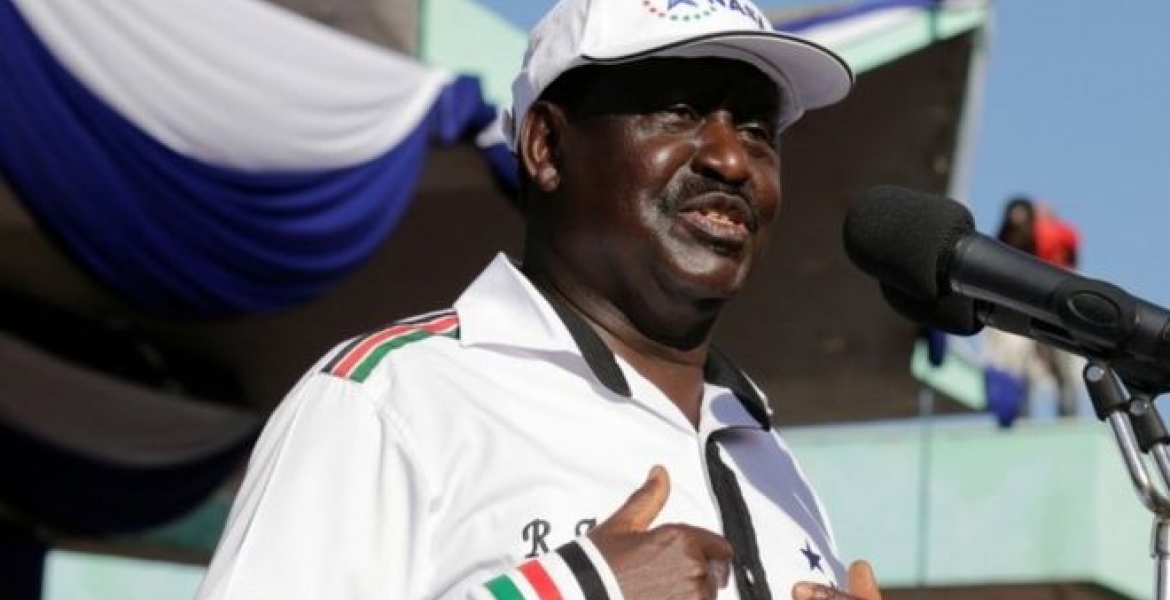 National Super Alliance (NASA) flag-bearer Raila Odinga has warned Defense Cabinet Secretary Rachel Omamo against being used by the Jubilee Administration to involve the Military in the August 8 elections.

Speaking while on a campaign trail in Vihiga, the former Prime Minister insisted the government was scheming to use the Kenya Defense Force officers as agents in order to rig the upcoming polls.

Raila cautioned Omamo and urged her not to be duped by Jubilee into allowing the military to rig the election.

"I want to warn Omamo not to be cheated by Jubilee to deploy the Military during elections. It is not the responsibility of Kenya Defense Forces to get involved in issues of internal security. The Army is set in place to guard the country against external forces. If the government wants to use military in the coming elections they must get an approval from the parliament," Raila said.

Last week, the opposition chief alleged that the government was training Military personnel to be used as electoral agents across the country, adding that already over 100 KDF officers had been deployed in Kakamega County to aid in rigging of the August polls.

President Uhuru Kenyatta responding to Raila’s allegations denied the claims saying that the opposition had resorted to crying foul after sensing defeat in the upcoming elections.

"That man is a rumor monger who knows that he can't win in August that is why he is busy spreading rumors and propaganda," Uhuru said.

Ojinga is at it again.Lies and no hard evidence to back them up.
I learnt at a very young age while in my first year in college that it is never a smart thing to politicise security forces. Yet that is what we appear to be doing ahead of the August 8 elections. Former Prime Minister Raila Ojinga is on record accusing the Jubilee administration of deploying security forces to strategic parts of the country in a bid to sway the outcome in President Uhuru Kenyatta’s favour. I know we have become immune to such charges, but this is not a trivial claim. If we are to remain a democracy we must ensure the security forces stay politically neutral, and only loyal to the republic.
To make this happen, all political leaders need to be careful with their actions and public statements. Ojinga’s claims must be backed with hard evidence and a formal complaint to the Independent Electoral and Boundaries Commission (IEBC) and the Director of Public Prosecutions. It is not enough to raise the alarm. Kenyans are adults, and can deal with facts. Share the information so that people of good will can decide for themselves.
On his part, President Kenyatta must resist the temptation of using the security forces to engineer a favourable electoral outcome. To paraphrase the late George Saitoti, he must realise that there comes a time when the republic is bigger than all of us.
Using the military, in the manner claimed by Ojinga, would set a bad precedent for future presidents and would expose us to coups and counter coups. That is a problem we have managed to avoid for much of our history. And we should not play with fire. Remember countries like Brazil and Turkey continued to suffer coups and counter coups decades after the generals got their first taste of power. This is a path we must avoid at all costs. It is not part of our political culture.
Lastly, our soldiers must not allow themselves to be used as political pawns. They wear their uniforms in our names. Fight and die in our names. And together with their families have made sacrifices that we can never repay them for.
This is a sacred commitment that we should not desecrate for the sake of politics. As a society, we must internalise the fact that there are things we hold sacred and inviolable. And honouring our armed forces is definitely up there on the list. It is for this reason that we should avoid the temptation to drag their honour and service in the mud of everyday political scheming.
The ability to engage in competitive electoral politics without trashing of key institutions of state is a key indicator of political maturity. We must be able to compete politically, even in the midst of the ugliest of elections without destroying our courts, police force, military, or civil service.
Indeed, our goal should be to invest in ensuring institutions of state are firewalled from our politics as much as possible. Politicisation tends to lead to eventual collapse of public ethos and service delivery. This is not a direction that we should consciously choose to follow. We are better than this.

We need many of them in kisumu/kibera/coast not for rigging but to teach them adhabu incase they start the usual shit like 07/08.Pple should ignore rao with his alzheimers n dementia.