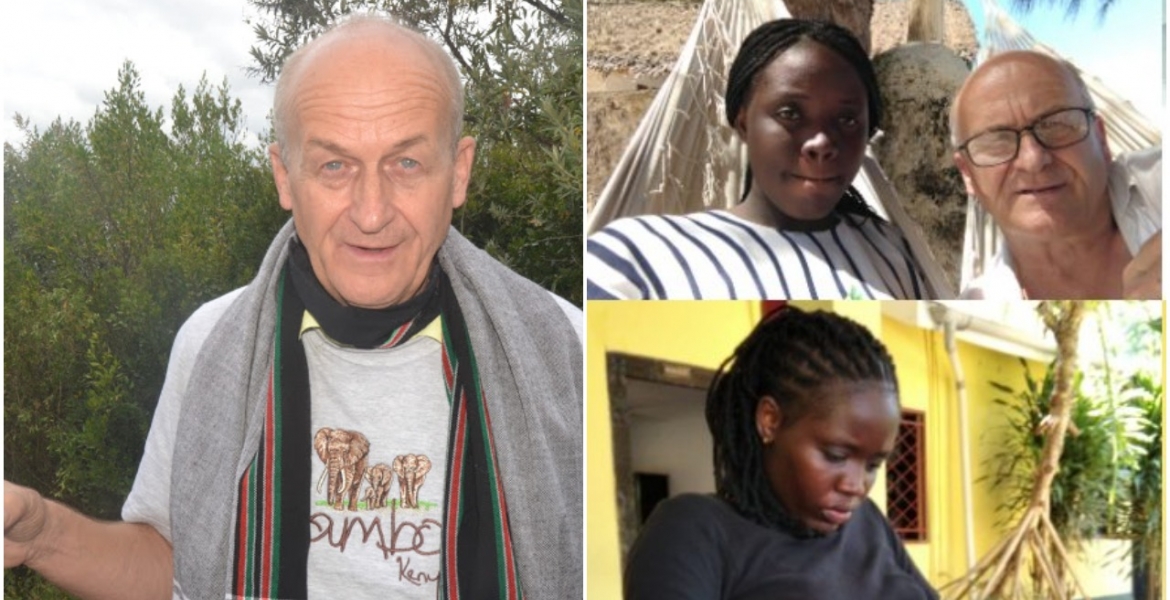 A 66-year-old German investor who was allegedly robbed of Sh5.4 million by his Kenyan girlfriend has fled to Tanzania for fear of his life.

He told local media that he has been receiving threats since his girlfriend Mercy Adhiambo Achieng, 24, vanished after stealing the millions from his villa at Harbour Key cottages in Malindi in September last year.

“I am currently out of Kenya in one of the East African countries for my safety because of the threats I was receiving from anonymous people who were always detecting my location,” Kreplin told K24 Digital.

He added that he visited Mercy’s rural home in Siaya County last month hoping to get information on her whereabouts but the family said she has been unreachable for months.

The foreigner said he was cohabiting with Mercy before she stole 40,000 Euros and disappeared. Since the incident, anonymous people have been sending him threats, forcing him to leave his house and move from one town to another over fears that his girlfriend could be trailing him with a gang.

Kreplin said he had just jetted back to Kenya carrying a huge amount of cash with a view of buying a second villa at Harbour Key cottages, which he would co-own with Mercy. He also planned to invest Sh5 million in an irrigation project and a recycling plant in Ganze, Kilifi County.

"I reported the matter to Malindi police station after she went missing. We went with the police to my cottage only to find the suitcase broken into and Sh5.4 million in foreign currency missing,’’ he said.

The German came to Kenya in January 2019 as a tourist from Ethiopia, where he initially wanted to invest. He met Mercy at Amada Resort, where she worked as a waitress and they immediately fell in love.

He later bought a villa at Harbor Key Cottages in Malindi from an Italian national and moved in with Mercy. Kreplin also said he was supporting her family financially.

He has expressed dissatisfaction with the way police are handling the matter, saying they have taken long to track and arrest Mercy.

I commend the Mzungus enterpreneural spirit,and I hope it has not deemed.The grand mistake he made is mixing the so called romantic love with business.Those two dont mix well like water,and oil.
Iam mystified ,at 66years old the man is talking about love at first sight?Come on. No wonder he was sucked in... Mzee should know that you dont fall in love immediately with a 24 year old when you are 66.The first instict if you are genuine should be a fatherly love.What you felt was lust,and see where it landed you.
This is alesson to not only old wazungus,but to men who engage is this kind of skewed "love affair". Do it at your own peril.You never win.Unless you call scoring with a young fresh winning,but at what cost...
Moral of the story-Have one single minded purpose. If you come to invest, invest,dont let distractions derail you.

What is he investing in!? A piece of black ass? Wow, that is a damn honky punky entrepreneurial spirit @ maxilley!

@ Njogu, if you read my post carefully, Iam just going by what Mzungu said. Infact he had already invested in real estate. I said the mistake he made was to be distracted from his investment plans of real estate by lust.Big mistake.

Zungu was playing on the table but girl was underneath. This Zungu was genuinely in love despite naivety. Are There any Kenya women that know love anymore. It is all about the money lately. Current generation is so wicked, money minded, liberal, loose, into anything for cash. I bet the mzungu was conservative but entrepreneurial.

Cant believe Han is letting some ugly looking gold digger run him out of the country! Lessons well learned by the mzungu!

What is Han gonna do once he gets in the same kind of trouble in TZ? Run to South Africa? He has already ran from Ethiopia to Kenya and now to TZ! What women can do to a man is really strange!

What are you going to do Han when Achieng come looking for you in Tanzania? Just in the Indian Ocean? Please!

You introduced a poor woman to living a void life and now you have waned her flat! Good grief Han! No wonder she is pursuing you with threats! A luo man would have beaten her up like Shenzi bad!

Some women are just so expensive. Holy smokes! This dude paid too much for this woman. These are the kind of women who don't like being treated nicely. She was so ungrateful and impatient. I bet she would have made more money from the old dude had she been patient and nice. I won't be surprised if she gets broke soon.

The family is lying Han! They are all partaker in her crimes! It is good you left the country before they harm you!

Hans must count his losses and leave for Germany because it could have been worse. His other brother ended up in the septic tank. However, once he gets home, he must spread the word to the other old geezers to steer away from our charming young women. Ni moto wa kuotea mbali.

@ Mugikuyu, good advise.Someone said on this forum that in Germany, it would not be easy for Mzee to chase ndogo ndogo there even if he has wealth.Do you also advise him to stick to his own age when it comes to dating,even though the young fresh is more appealing?

@Maxiley, clearly this dude with his gullible nature does not feel up to par with his age mates. Even those in their 30s do not appeal to him for reasons only known to him. Being a fossil that he is prefers kids young enough to be his grandchildren.

@ Mugikuyu, good advise.Someone said on this forum that in Germany, it would not be easy for Mzee to chase ndogo ndogo there even if he has wealth.Do you also advise him to stick to his own age when it comes to dating,even though the young fresh is more appealing?